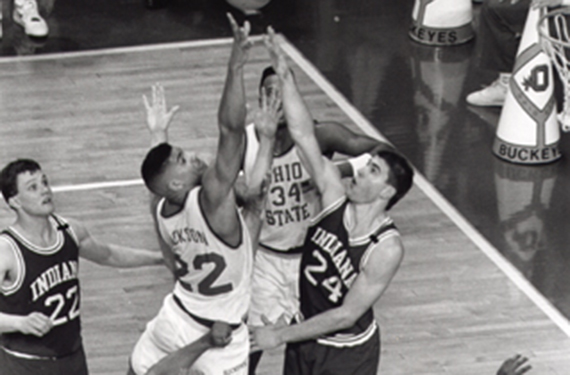 The 1991-92 Buckeyes posted a 26-6 record with a 15-3 mark in the Big Ten under head coach Randy Ayers. Despite winning the Big Ten outright, they only made it to the Elite Eight before falling to Michigan’s ‘Fab Five’ in overtime, 75-71.

“The Jimmy Jackson team with Lawrence Funderburke, Chris Jent and Mark Baker – those guys were really good. They won the Big Ten championship, but they went to the NCAA tournament and didn’t have much success there.”

White credited Jackson’s competitive edge for guiding the team to a Big Ten title and an Elite Eight appearance. As a junior, Jackson won Big Ten player of the year and earned consensus first-team All-American recognition, both for the second straight season.

“Obviously, everyone knows about Jimmy Jackson, who was the star of that team, the guy who really was an engine for generating a lot of offense and a lot of focus for that team,” White said. “Because Jimmy was so good on the court, you don’t realize how much of a competitor he was. As good as he was physically, he might have been even better mentally, as a player, because he just brought it all the time. He competed and he challenged his teammates to be better.”

Jackson led the team in scoring and rebounding, averaging 22.4 points and 6.8 rebounds per game, as well as 4.0 assists. Jent averaged 12.6 points and 5.3 boards as a senior, while Baker recorded 11.8 points to go with a team-high 5.2 assists per contest. Funderburke provided 12.2 points and 6.5 rebounds per game in his first season after sitting out a year following his transfer from Indiana. Senior guard Jamaal Brown added 9.9 points, shooting 51.2 percent from the field and 42.3 percent from three-point range.

“You had Jimmy to start with, and he had just a terrific group of guys around him,” White said. “When you talk about having somebody like Chris Jent out there who’s another tremendous competitor – a lefty with the versatility he had to shoot and pass and score in different ways. Jamaal Brown, who was a starter from the day he walked into my senior year team as a freshman, is just a guy who knew how to play the game, didn’t make a whole lot of mistakes, made jump shots, was a physical presence and a great defender. And Mark Baker, who was just as quick and smart, and good with the ball as you’re going to find out there in a point guard. That was a team that had a really great core of guys, and a superstar. And when you have a great core and a superstar, you have a lot of potential.”

The well-structured Ohio State team did not quite actualize all its potential, falling to rival Michigan in the Elite Eight after an excellent season, but the group still measures up with the best in school history.

Jackson enjoyed the most professional basketball success on the squad, spending 14 seasons in the NBA. The former two-time Ohio Mr. Basketball winner from Toledo Macomber averaged a career-high 25.7 points per game in his third NBA season with the Mavericks in 1994-95.

Before becoming one of the NBA’s most respected assistant coaches, Jent spent some time in the league amid a long professional career, primarily spent overseas. He played three games for the Rockets in 1993-94 and three more for the Knicks in 1996–97. Jent won an NBA title with the Rockets in 1994, playing in 11 games during the title run, giving him more career playoff games than regular-season games.

Funderburke was selected in the second round of the 1994 NBA Draft and joined the Kings after spending three years playing overseas. The former Indiana transfer from Columbus Werhle averaged 9.5 points and 4.5 rebounds as a rookie and had an important role as Chris Webber’s backup from 1998-2003, culminating in back-to-back Pacific Division titles.

“I remember Lawrence Funderburke when he was a senior in high school, and I was a senior at Ohio State. Lawrence used to play pickup games with us, both at Ohio State and also he came out to my old high school, and we played pickup games out there,” White said. “Lawrence was another guy who was a special talent as a young kid. Big and athletic and left-handed, and smart. One of the things that people don’t ascribe to Lawrence that was perhaps his best attribute as a player was that he was very, very smart as a player.

“As a young player, you could use experience to beat him once. And you couldn’t go back to that again; you had to beat him again a different way, because he learned. When you beat him once on a mental play or an experienced play, you better have another one. Because Lawrence is going to learn from that, and you’re not going to beat him again that way. Because he was too athletic and too big – once he figured out how to do something, he did it. And when he came, he really gave that Ohio State team a boost because they needed a big, athletic guy – because Perry Carter left, and with Perry gone, that left a hole right there.”

The Buckeyes cruised to an impressive 26-6 mark, spending the entire season ranked in the top 10 in the AP poll and finishing the season at No. 3. A more challenging nonconference schedule may have prepared the Buckeyes better for the challenging nature of March Madness, however.

“I always felt that one of the mistakes that they made was they played a very, very, very weak nonconference schedule, and even a good Big Ten won’t prepare you to be successful the NCAA Tournament,” Caryer said. “One of the things about Coach Taylor is they always played the best teams in the country. But the Jackson teams brought a lot of energy to St. John Arena. They had a lot of talent, and they were awfully good.”