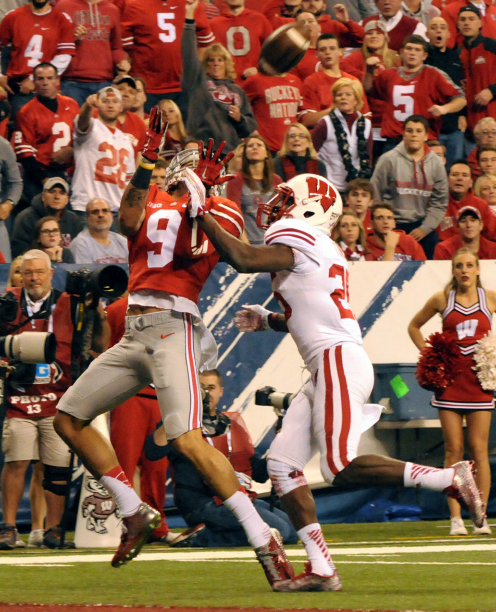 With the return of football up in the air, now serves as a perfect time for reflection on the history of football, and the strategic evolution of the game. To do that, the film study will be spending the offseason looking back at classic Ohio State games. Today’s film study takes a look at Ohio State’s blowout win against Wisconsin in the 2014 Big Ten Championship. Video is from this cut-up. Last week’s film study can be found here.

To say that Urban Meyer and Tom Herman had a difficult task to complete late in the 2014 season would be a pretty significant understatement. The story certainly isn’t new to essentially anyone that follows college football: Braxton Miller goes down prior to the season, Meyer and Herman reinvent the offense for J.T. Barrett. Barrett goes down in the final game of the regular season, they reinvent the offense for third-stringer Cardale Jones.

However, the degree of difficulty in what Ohio State ultimately accomplished is often not fully realized, largely because it’s too gargantuan and absurd a task to even consider from the outside. The idea that you can recreate an offense in a week, picking apart your own playbook and putting it back together with only pieces that fit a wildly different quarterback than the one you spent the season with, is, frankly, ridiculous. That shouldn’t happen. It shouldn’t be possible.

Of course, that’s exactly what Meyer and Herman did, so successfully that it helped Ohio State topple three top teams in as many games, led by a quarterback that was working with a playbook that was created on the spot, roughly one week before he began his career as a starter against three of the best defenses in the nation.

Now, saying that the playbook was brand new may be giving slightly too much credit to the offensive brain trust, because it isn’t like Ohio State switched from the spread to the triple option or anything as drastic as that, but there was still a marked shift from what Ohio State was doing with Barrett to what Ohio State did with Jones. The Big Ten Championship Game against Wisconsin serves as the ideal lens to view that shift, partially because its the one game of the three-game run that has all-22 tape available online, partially because Wisconsin provided very little resistance, allowing Ohio State to stretch out and showcase the new playbook that Herman and Meyer built.

The largest change came in the passing game, which made an appearance very early in the game. Jones was a significantly different passer than Barrett, and because of that, the approach to the passing game had to undergo a significant change. OSU essentially cut the short passing game out of its gameplan because Jones struggled greatly with the quick reads and short pass accuracy, substituting in a play action-heavy, vertical passing attack for what had mostly been a quick-hit passing attack throughout the season.

To set that passing game up, Ohio State had to first establish the run, which became an equally (if not even more so) crucial part of this title run. Halfback Ezekiel Elliott shouldered a massive amount of the load for the offense and was used both as a workhorse and as a set-up for big passes down the field. His early success was designed to eat up yards, but also to draw the defense in so that Jones could take advantage over the top.

To do that, Ohio State stuck largely to the style of running that worked for much of the season, though it did make the smart move of mostly cutting out the quarterback keep option from the playbook, as Jones was nowhere near as fleet-footed and dangerous as either of his predecessors. Instead, Ohio State shifted full-time into a zone running team, pounding the rock with Elliott following closely behind an athletic offensive line that thrived moving laterally instead of blocking straight down.

Ohio State went right to that well on the first drive of the game. This is a variation of that inverted veer/power read look that Meyer utilized so well with Miller and Barrett, turned into a base handoff play (essentially a sweep) rather than a true option. The blocking stays basically the same, though the pulling blocker is the center rather than the guard, which is a neat little wrinkle even if it doesn’t seem to change much about the play. Elliott is aiming for the C gap outside of Taylor Decker, following Decker’s lead to the outside while the tight end seals off an edge rusher (quite emphatically).

Decker does his job well enough downfield to slow down the cornerback trying to set the edge on the perimeter, and Elliott slips out to the sideline for a solid early gain that will also do well to influence those linebackers into taking a hard first step when they see that pulling action paired with a fake handoff later in the game.

Ohio State stuck heavily to that pulling action to confuse linebackers and safeties. it;s becoming more common to pull on a passing play to sell play action, but this is still fairly uncommon, and when a defense isn’t ready for it, it can be devastating, as it was all game against Wisconsin. Ohio State did this for years under Meyer, and actually went back to it in one of the most famous plays of Meyer’s tenure, when Barrett found Marcus Baugh in the back of the end zone against Penn State in 2017 to win the game.

This play works a lot like that one did. In both instances, Ohio State is using a pulling blocker to really sell the run, while directly attacking the safety with a fake to open up space over the top. Against Penn State, the fake to the open side of the field sucks the linebackers in and pulls the single-high safety into open space, away from where the ball is actually going. Against Wisconsin, again with a single-high safety, Ohio State is looking to drag those linebackers and safety in to get single coverage on the outside for Devin Smith.

To do that, Ohio State keeps a tight end in to block, and runs a front that looks almost identical to what the Buckeyes would run on a quarterback keeper with Barrett at the helm, as it had done for much of the season. Wisconsin saw that on tape, and the safety figured that he was ahead of the Buckeyes when he saw the alignment and Jones taking a hard first step in. By the time Jones dropped back off of his fake step, the safety is completely out of the play, which only served to emphasize just how little Wisconsin was respecting Jones as a passer, as the safety wasn’t even a truly crucial part of this coverage.

Sure, it’d be nice to have him deep, but Wisconsin was trusting its defensive backs to match up with and beat Ohio State’s receivers in man coverage, without any sort of help over the top. The Buckeyes knew that this was coming, because no one in their right mind would expect a third-stringer to be able to do this, so they leaned into it, and really sold the idea that they couldn’t pass, all the way into a one-on-one matchup in the end zone for Smith, one of the best deep ball trackers in the country in 2014.

That was pretty much Ohio State’s approach to attacking the Wisconsin defense all game long, and Wisconsin never really did anything to stop it. Later in the first half, set up again by several strong runs, Ohio State went right back to that play action blueprint, this time with a fake inside zone handoff to Elliott, dragging those linebackers and safeties in and creating individual matchups on the perimeter. Wisconsin is in man coverage, the safety realizes what’s happening and starts to fall back, directly into Ohio State’s mesh point on two deep crossers. The safety and a cornerback are caught in no man’s land with the cross, and both receivers are left completely wide open, giving Jones and easy throw.

Jones found huge success on play action twice more in the game, both again to Smith, and both again for essentially the exact same reasons. This first one came on that same draw fake that completely takes the cheating safety out of the play, leaving everyone else in single coverage. Smith wins that matchup again, Jones makes what might have been the throw of his life, and Ohio State extends its lead.

Ohio State was even doing this into the second half, which means that Wisconsin was so stunned by what had happened in the first 30 minutes that it essentially didn’t even try to adjust to it in the next 30. Even as the Badgers switch into a zone blitz scheme showed here, it’s obvious that the coaching staff on that side of the field doesn’t understand what isn’t working. The issue wasn’t that Jones had too much time to throw, it was that too few defensive backs were being dedicated to defending the pass down the field. Smith gets vertical again, he’s again met with only a single player in defense on his side of the field, and Jones just has to put the ball near him for the score.

Smith isn’t even the most open player on the field here. The safety gets completely lost trying to track over to stop Smith, and the slot receiver runs unguarded down the middle of the field, which would have been an even easier touchdown pass had Jones seen it in time. If Wisconsin had switched to a two-high safety look, rolling primarily with a quarters zone in the second half, Ohio State still wins, but Jones would have at least been slowed down. Instead, Wisconsin sold out to stop the run and to pressure Jones, and managed to accomplish neither.

That’s what’s so bizarre about this game, at least on Wisconsin’s end. While being picked apart by a quarterback that no one had any idea about is at least understandable, the fact of the matter is that Wisconsin was gashed because it sold out to stop the run, which it absolutely did not do. There’s an easy argument to be made that the run was even more effective for the Buckeyes than the play action pass was.

To find reasoning for that, you have to look into the trenches, which were so crucial for Ohio State during the 2014 title run. This play serves as a great example. Ohio State is running a inside zone from the pistol. The line is reach blocking across the board with a tight end pulling across to crack down on the unblocked defensive end. Elliott is looking to hit a hole created by those reach blocks, with the line essentially washing Wisconsin down the field, freeing up the tight end and center to seal off the backside, clearing a path for Elliott to hit.

It works perfectly, and Wisconsin never even gets close to touching Elliott.

The Buckeyes score again later in the half on another inside zone, with Wisconsin again taken completely out of the play as Elliott bursts through the line.

This is your story of the game. Wisconsin was behind the eight ball in the passing game because of a lack of knowledge about Jones’ ability (though it should’ve known better than to leave Smith in single-coverage), and unquestionably dominated for all four quarters up front. Ohio State was a significantly better team, and came in far more prepared that the Badgers did. That’s almost always a recipe for a rout, and this one just happened to come on a major stage that would launch OSU to its first title since 2002.