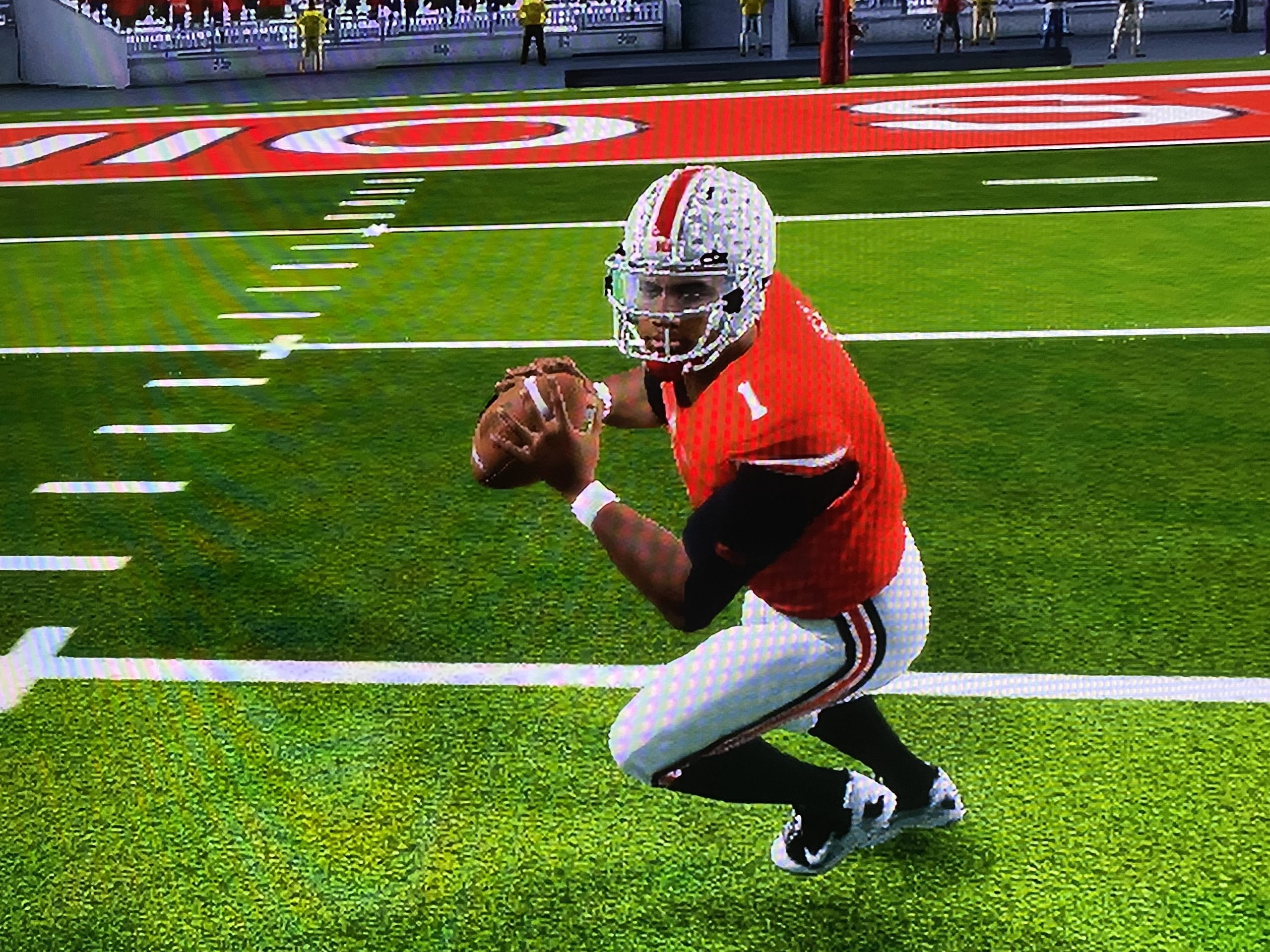 After a mostly thrilling Elite Eight, the BSB NCAA Football 14 Tournament is down to just four teams, three of which happen to be the one seeds.

Ohio State and LSU face off in a battle full of history, with former Buckeye quarterback returning to Ohio Stadium for the first time since his transfer.

On the other side, Alabama and Florida battle for the first time since 2016, with the Gators looking to upset a second straight one seed after taking down Clemson in the Elite Eight.

The Buckeyes have won close game after close game while LSU has blown out each of its opponents.

Early on, this game looked to be LSU’s fifth straight blowout of the tournament.

The Tigers went up 14-0, 21-7 and 28-14 throughout the first half, taking that 28-14 lead into halftime with Joe Burrow leading the way, completing 17 of 20 passes for 242 yards and three touchdowns in the opening two quarters.

On the other side, Justin Fields started the game with an interception on his first pass, but finished the first half with 145 yards through the air and 81 yards on the ground.

In the second and third quarters, two separate Ohio State drives stalled out at the 25-yard line, and both times the Buckeyes got a false start penalty, making Blake Haubeil attempt two 47-yard field goals.

He hit both off the uprights, and the game remained 28-14.

LSU is still up 28-14, and yes, my controller is now reconnected. pic.twitter.com/T3msCnoBud

Haubeil had yet another attempt from 47 yards out, and he hit this one, and Ohio State went into the fourth down just 11 points. The Buckeyes cut the deficit to three after a remarkable touchdown by Austin Mack and the ensuing two-point try.

The senior wide receiver doesn’t want to be finished yet, breaking a tackle in the backfield on 3rd and 5 and taking it 52 yards to the house.

Ohio State goes for two and get it. The Buckeyes trail LSU 28-25 with 6:08 to go. pic.twitter.com/9YbNgOQRZy

LSU’s offense continued to stall, but when Ohio State got the ball back once again, Fields fumbled with the Tigers recovering at the OSU 15-yard line, giving Burrow a chance to put LSU up two possessions. Instead Ohio State’s defense stood tall, giving up just a field goal to make it a 31-25 game.

The next drive, Fields flew the offense down the field, with help from a kick return by J.K. Dobbins, and found an unlikely hero in Jaelen Gill in the end zone for a score that put the Buckeyes in the lead for the first time all game.

Fields hits Gill from 15 yards out for the touchdown, and a Haubeil extra point gives Ohio State a 32-31 lead over LSU with 3:18 to go.

This is the Buckeyes’ first lead of the game. March. pic.twitter.com/sEvcV7DbPK

There was still plenty of time for Burrow to get the offense rolling, but he threw his lone interception of the game at the most inopportune time, giving the ball up to cornerback Damon Arnette.

The fifth-year senior, who apparently has let the hair grow out, picks off Joe Burrow with 2:04 to go in the game to give Ohio State the ball up 32-31.

Burrow’s first INT of the game could not have come at a worse time for LSU. pic.twitter.com/T11SXTj4aA

Ohio State scored another touchdown to go up 39-31, and LSU was down to its last chance with 1:39 to play.

Burrow led the Tigers down to the red zone, but Cameron Brown made the fourth down stop, and Ohio State completed the comeback victory.

4th and 5, eight seconds left, it is Cameron Brown who plays the hero for Ohio State.

Brown breaks up the throw from Joe Burrow to Ja’Marr Chase, and seals Ohio State’s spot in the national title game. pic.twitter.com/PYzbg9L2uS

Ohio State outscored LSU 25-3 in the second half, and were led by Fields, who threw for 220 yards and ran for 193 on the day. Burrow threw for 347 yards and three scores on the day.

The full highlight reel from this game can be found here.

1 Ohio State takes on 1 LSU in the Final Four of the @Buckeye_Sports NCAA Football 14 Tournament.

Ohio State is at home for this event because seeding went by SP+ end of season rankings. Don’t like it? Take it up with @ESPN_BillC. pic.twitter.com/h9ABiBcFSL

Alabama’s run in this tournament has come as a bit of a shock. Obviously, the Crimson Tide are a one-seed, and the winners of a billion titles in the last decade, making that statement a bit silly, but that doesn’t tell the whole story.

This is a team without its starting quarterback, and a team that has blasted its way through to the Final Four with an average win margin of 22.3 points. That wasn’t done against scrubs, either. The Tide beat No. 16 Illinois by 17, No. 8 Tennessee by 39, No. 12 Arizona State by 26 and No. 2 Oklahoma by seven.

Playing ASU instead of Oregon or Washington was a stroke of luck, but the Sun Devils earned that spot, and looked formidable heading into the game. Alabama hasn’t been the flashiest winner in this tournament, but it has been the most consistent, despite being forced to break in a new quarterback. That’s pretty improbable.

On the other side, Florida has essentially answered all questioned that was asked of it. Kyle Trask has starred, the defense has been lights out, and the rushing game, led by Lamical Perine, has provided steady yardage.

The Gators were certainly the least hyped member of this Final Four, but their run was as impressive as anyone’s. They toppled an upstart Wake Forest team with a late touchdown, crushed Appalachian State and Wisconsin, and then again struck late to beat No. 1 Clemson.

The East seemed to be the most likely region to produce a one-seed finalist, given Clemson’s dominance paired with what looked like a weak two-seed. Obviously, that wasn’t the case, and now Florida has a chance to upend the odds once again.

It started off slowly, as quite a few Florida games have this tournament. Alabama struck first, late in the first quarter with a 32-yard field goal to claim a 3-0 lead. A short Brian Robinson run a minute into the second quarter put Alabama up 10-0, with Florida’s offense sputtering and Trask unable to find open targets.

While it still didn’t quite kick into full gear, Florida’s offense was able to salvage the half. A 23-yard field goal put the Gators on the board, and a Tide three-and-out followed by another Gator field goal brought the deficit to just four entering the break.

Out of the half, it was Florida again finding points. Mac Jones fired an interception deep in Florida territory. A short drive later, and UF was within one after another field goal, this time from 54 yards out.

With 2:20 to play in the third, Florida finally broke into the end zone, with Trask hitting Tyrie Cleveland from 63 yards out for six, though a failed two-point try made the lead 15-10, though Alabama drilled its own long kick to make the score 15-13 in favor of the Gators entering the final frame.

A fourth field goal extended that lead to 18-13 with 5:33 to play. That seemed to snap Alabama out of its funk, because just a minute later, Jones found Devonta Smith for a 55-yard score. A successful two-point try gave the Crimson Tide its first lead since early in the second half, 21-18, with just 4:17 to play.

A brutal Trask interception gave Alabama the ball inside the red zone, and two plays later, Jones scampered into the end zone to give Alabama a 10 point lead, tied for its largest of the game.

Trask found Trevon Grimes from 79-yards out with 1:48 to play to bring the game within three, but Alabama recovered the onside kick and ran out the clock to advance to the National Championship.

For Florida, Trask made just one too many mistakes. He was good, completing 31 of his 47 attempts for 416 yards and two touchdowns, but his four interceptions were enough to give the Crimson Tide a boost needed to hold on. Defensively, David Reese was the hero, with 16 tackles and an interception.

Tune in tomorrow for the National Championship Game between Ohio State and Alabama. 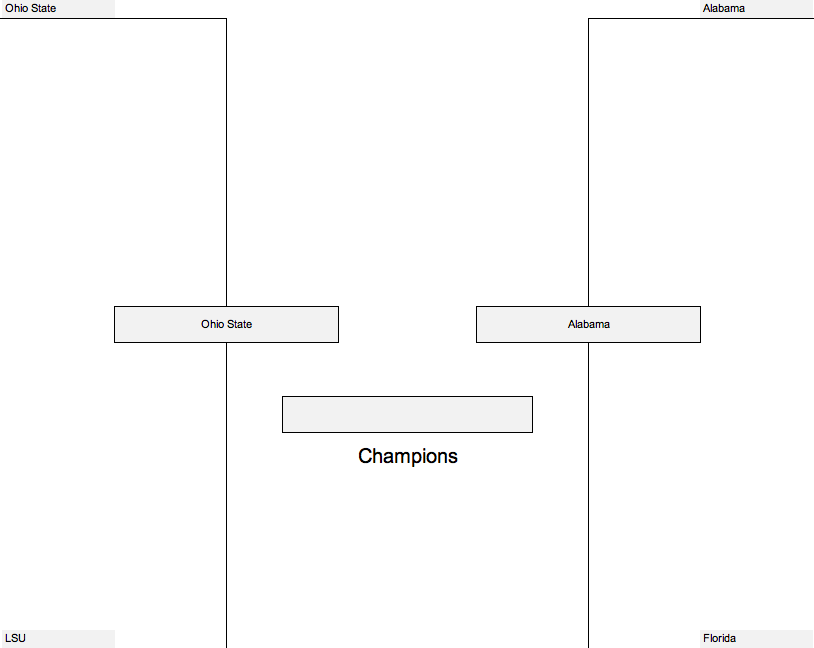