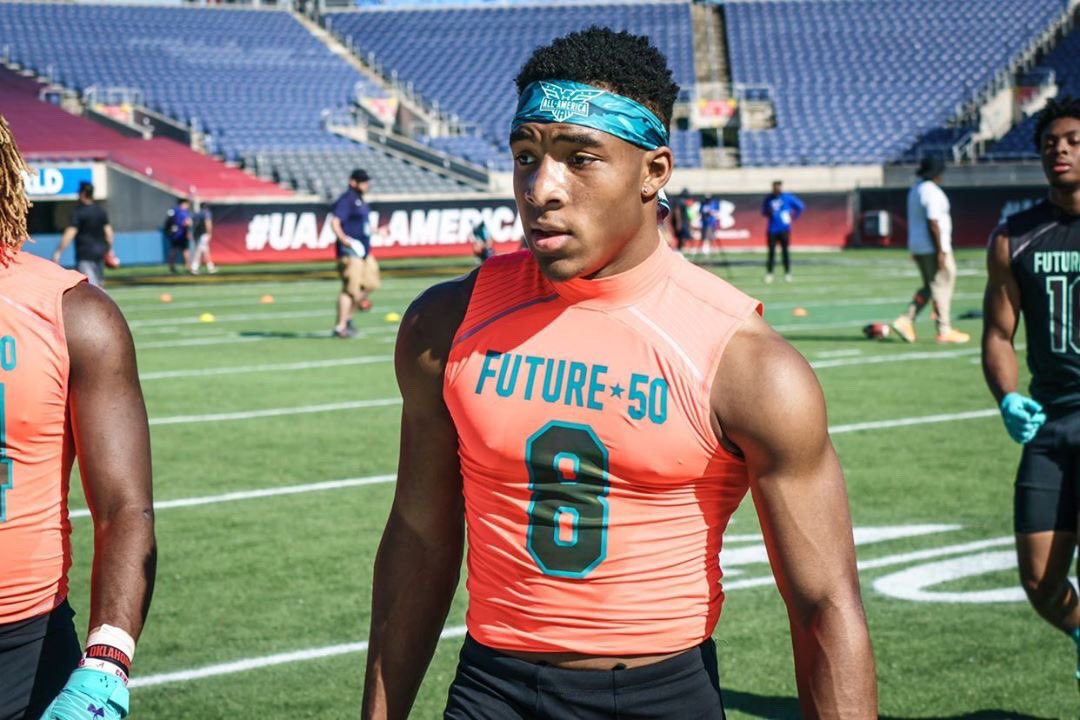 It came about a year later than expected, but Tony Alford has landed his five-star running back, a first at Ohio State since Beanie Wells signed with the Buckeyes in the class of 2006. Now, 15 years later, OSU has landed a pledge from TreVeyon Henderson, a Virginia product rated as the nation’s No. 17 player, and a five-star recruit per the 247Sports Composite.

This comes a little less than a year after the now-notorious Bijan Robinson recruiting cycle, which saw Alford nearly reel in the five-star, only to have location issues land Robinson at Texas rather than Ohio State. This time, however, the halfback isn’t slipping away.

Henderson isn’t the only blue-chip running back in Ohio State’s class, either. He joins Evan Pryor, a shifty, low-to-the-ground speedster that will serve as more of an efficiency back at Ohio State than a big play back. That’s where Henderson comes in. Ohio State’s plan with these two is to use both interchangeably at the next level, with their different skill sets working to complement each other and stretch the defense. If Pryor is the efficient runner, Henderson is the home run hitter.

There may not be a running back in the nation better suited for that role. At 5-11, 195 pounds, Henderson certainly isn’t big, but he’s big enough that he can take a hit, without being too big to maintain his speed. Ohio State will likely look to move him above the 200 pound threshold, but not by much. The play style comparison here is Reggie Bush, who played at 6-0, 203 pounds. Henderson is very close to that goal already.

Now, the Bush comparison is not one that just gets thrown around. Bush is the most electric, dangerous runner in college football history. This is not to say that Henderson will be that, because Reggie Bush is already that, and it isn’t exactly an easy thing to be. It is to say, however, that the way Henderson runs, the way that he reads defenses on the fly, and the athletic traits that he has make him a dead ringer for Bush on his high school film.

Those skills also led him to 3,193 all-purpose yards and 53 touchdowns as a junior. It’s very, very easy to see why. Henderson has sub-4.4 speed, excellent vision, the patience of a far more experienced back, and moves to match. He’s a fluid runner and he never seems to slow down, even as he’s gliding in and out of cuts.

Take this run for example. Henderson gets to the outside and doesn’t start to get downhill until he knows there’s a hole and blocking for him, even with the mess that is the middle of the field. Once down the field, he flashes those moves, leaping over a defender, cutting outside and nearly coming to a complete stop in the span of about 10 yards, before accelerating again and hitting the pylon. There’s not a whole lot of technique to praise here outside of the early patience and vision, because this isn’t stuff that can be taught.

The elusiveness, the vision, it’s all part of a package that is essentially designed to gash defenses for big gains.

Oh, and he’s also the fastest player on the field by a country mile.

As for fit in Ohio State’s system, the short answer is that if this kid doesn’t fit in your system, it’s a problem with the system. That shouldn’t be a problem for Ohio State. He’s already well-versed in zone running, and knows how to make the reads and cuts expected of him in both inside and outside zone runs. He may have some issues running inside because he’s not very physical, but it didn’t trouble him much in high school, and it probably won’t in college.

To put is concisely, if Henderson stays healthy (and there’s no reason to think that he can’t), he’s a star, and a future first-round pick. The athleticism, vision and football IQ is all there, and on top of that, he’s going to be paired with a complementary back in Pryor that will keep defenses from adjusting, while keeping the tread fresh on both players. Everything is in place for Henderson to shine in Columbus, and he has the talent to do it from day one.