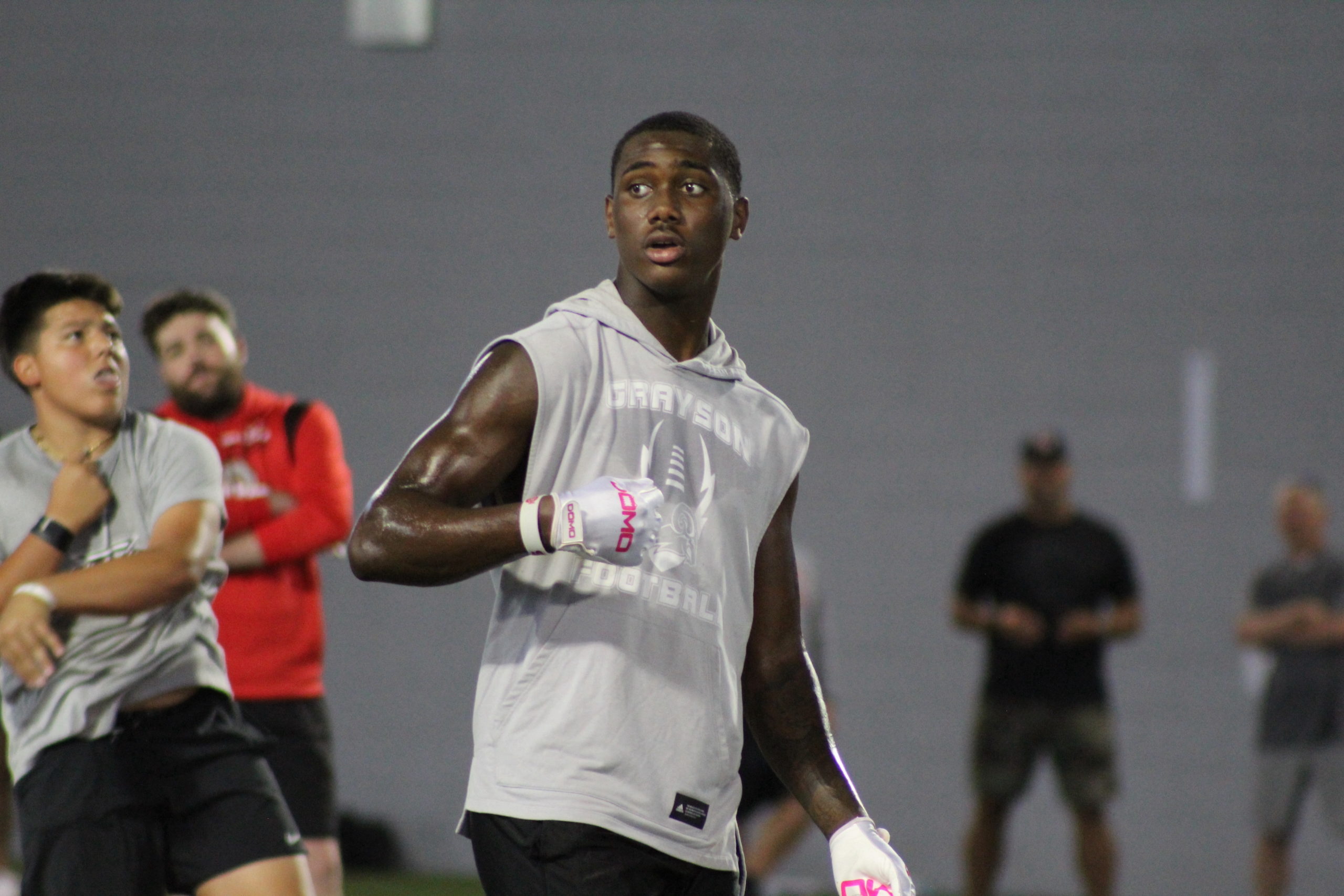 There were several other standouts, including a trio of prospects that received offers from the Buckeyes following their workouts. The first was Loganville (Ga.) Grayson four-star athlete Kylan Fox (6-5, 215), who worked out on Tuesday at defensive back and tight end and was offered at both positions.

Fox is the No. 152 overall prospect and No. 19 athlete in 2024. He holds additional offers from Arkansas, Auburn, Boston College, Kentucky, LSU, Michigan, Michigan State, Tennessee, Texas and Texas A&M, among others.

One of several quarterbacks throwing to Fox was Jacksonville (Fla.) Trinity Christian Academy quarterback Colin Hurley (6-0, 205), a 2025 prospect who earned an offer from the Buckeyes.

Besides Raiola, Hurley had the most impressive passing performance at Tuesday’s camp, working through head coach Ryan Day and quarterbacks coach Corey Dennis’ drills with ease.

He holds additional offers from Arkansas, Florida, Georgia, LSU, Miami (Fla.), Michigan State, Ole Miss and Pitt, among others. According to 247Sports, Hurley is the second quarterback offered by Ohio State in 2025 along with Ryan Montgomery (6-3, 200) out of Findlay, Ohio.

The final offer handed out was to Chandler (Ariz.) Basha four-star athlete Miles Lockhart (5-10, 185), a 2024 prospect who worked out at cornerback on Tuesday.

He is the No. 234 overall prospect and No. 31 athlete in 2024 and holds additional offers from Arizona, Colorado, Iowa, Iowa State, Oregon and Washington, among others.

One of Ohio State’s cornerback prospects in 2023 has a decision date. Cincinnati Winton Woods four-star Jermaine Mathews (6-0, 175) announced Wednesday that he will announce his college of choice on July 1.

Along with the announcement, he revealed his top six schools of Cincinnati, Jackson State, LSU, Ohio State, Oklahoma and Penn State.

Mathews is the No. 373 overall prospect and No. 24 athlete in his class. He has risen quickly on Ohio State’s board, receiving an offer after camping earlier this month. Within weeks of receiving his offer, Mathews made an official visit to Ohio State on June 17. His only other official visit was to Cincinnati on June 3.

Ohio State has one cornerback commitment in Tampa (Fla.) Wharton four-star Dijon Johnson (6-1, 190) and will look to take at least three in this cycle. Other top targets include Ellenwood (Ga.) Cedar Grove four-star Kayin Lee (5-11, 185) and Waxahachie, Texas, four-star Calvin Simpson-Hunt (6-0, 175), who is committed to Texas Tech.