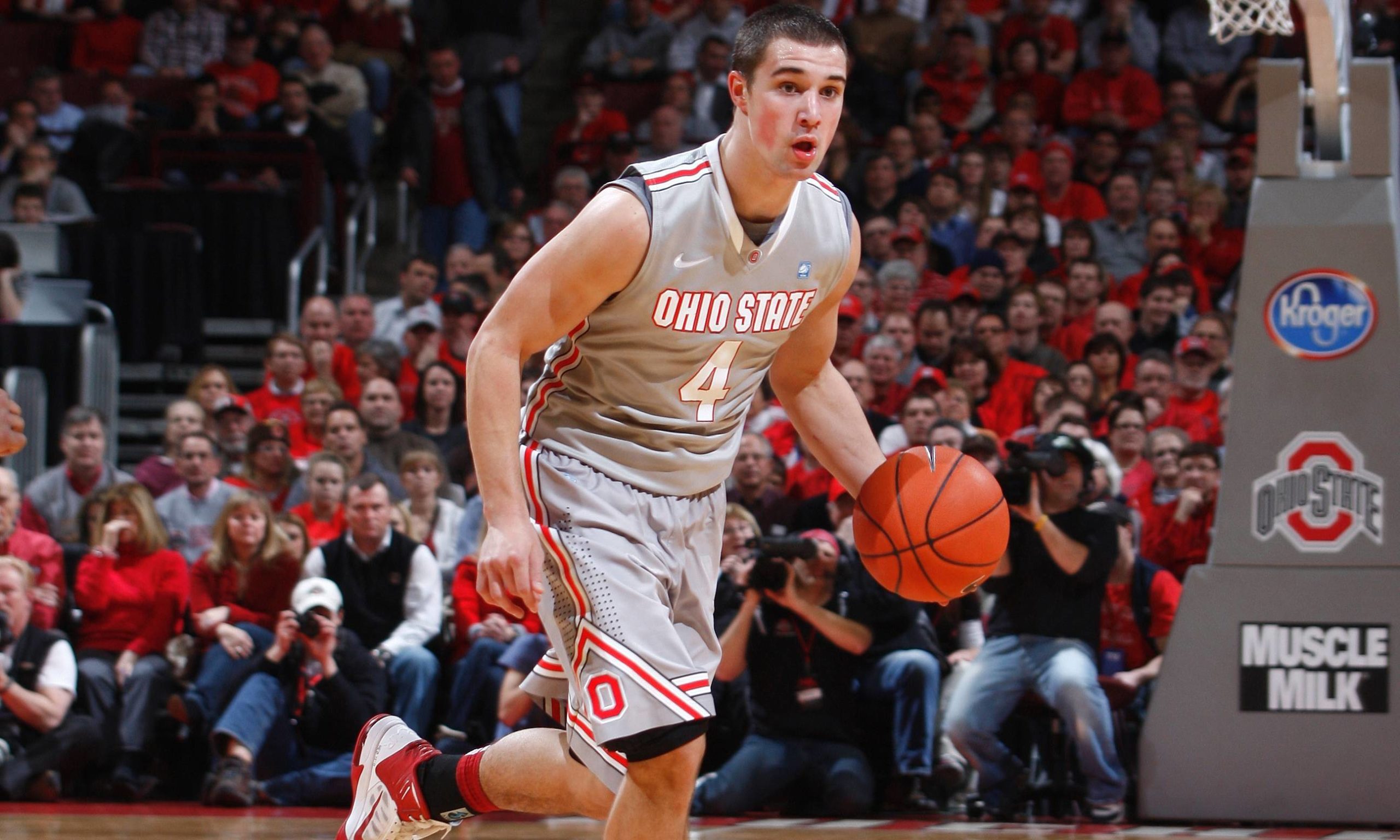 The Ohio State Athletics Hall of Fame added 15 members in the class of 2022, including former men’s basketball standout Aaron Craft and four-time NCAA champion wrestler Logan Stieber. The newest additions will be enshrined on Sept. 9 and honored when the Buckeye football team hosts Arkansas State on Sept. 10.

With the 15 new members, the Ohio State Athletics Hall of Fame increases to 473 athletes, coaches and administrators. The football team leads all programs with 132 inductees, while the men’s basketball follows with 47.

Here is the full list of inductees (in alphabetical order):

Bice was a four-year starter on the men’s lacrosse team from 2001-04. He is one of the finest defensive talents in Ohio State history. Bice collected two USILA All-American awards in his career, and he earned the Great Western Lacrosse League co-Player of the Year award after leading the Buckeyes to their second consecutive NCAA Tournament as a senior. While in Columbus, Bice helped Ohio State to a 38-20 record with back-to-back GWLL regular-season titles in 2003 and 2004. He was a three-time first-team All-GWLL selection.

After his collegiate career, Bice played professionally for 13 seasons and was a four-time Major League Lacrosse All-Star. He remains involved with the sport through color commentary on the Big Ten Network’s coverage of men’s lacrosse in the conference. Bice is also on the advisory board of a non-profit organization called Lacrosse the Nations, an international organization that utilizes sport to foster education for global communities.

Bluem is one of the most accomplished head coaches in Ohio State athletics history. In 21 seasons as the Buckeyes’ head coach, Bluem guided his teams to 206 wins and five Big Ten Championships. During his tenure, Ohio State the men’s soccer team appeared in the NCAA Tournament 10 times and advanced to the College Cup Finals in 2007.

His career spanned 27 seasons, and he accumulated 292 wins and 14 NCAA Tournament appearances. Bluem won the Big Ten Coach of the Year four times and added three more of those honors with Fresno State from 1991-96. As the leader of the Buckeyes, Bluem produced four All-Americans, 31 first-team All-Big Ten honorees and 17 Major League Soccer draft picks.

Bolen was a three-year letter winner for Ohio State from 1915-17. During those seasons, the Buckeyes went 20-1-2 and won back-to-back Big Ten Championships in his final two years. Bolen was named a consensus All-American in 1917 and a first-team All-Big Ten performer.

He also played for the men’s basketball team and lettered for three years (1916-18). Bolen was the team captain for the 1917-18 season. He coached football and basketball at Ohio Northern University and is credited with starting the school’s intramural sports program for non-student-athletes.

Sprinter Joel Brown created records from 2001-04 when he made a lasting impact for the Ohio State men’s track and field team. Brown holds the record for the 55m hurdles (a since retired event in the NCAA) and the 110m hurdles. He also held the 60m record for more than a decade and currently ranks third in the all-time record book for the program.

After his collegiate career, Brown earned sponsorships from Nike and Adidas as he competed for the United States worldwide and in the Olympic trials. He was the national champion in the 60m hurdles in 2005 and finished sixth at the World Championships that same year. Brown was a member of the world-record-breaking shuttle relay team in 2008 at the Penn Relays and finished ninth, 12th and 11th in his three Olympic trials.

In 2014, Brown became a full-time assistant for Ohio State as the sprints and hurdles coach. He is a four-time USTFCCCA Great Lakes Assistant Coach of the Year and has taught more than 25 All-Americans and 20 school-record holders.

Craft is one of the most decorated players in Ohio State men’s basketball history. He holds the program record for steals (337) and assists (694), leading all four teams in those categories during his career. Craft’s 337 steals are the most in Big Ten history and are currently the 15th-most in NCAA history.

Craft appeared in 148 games during his career — the second-most in Ohio State history — and was a part of 119 victories under then-head coach Thad Matta. He scored 1,300 points and is one of three players in Big Ten history with more than 600 assists and 300 steals. Craft led the Buckeyes to Big Ten regular-season titles in 2011 and 2012 and a Big Ten Tournament championship in 2013, where he was named the tournament’s Most Outstanding Player.

After his collegiate career, Craft spent time in the NBA’s Developmental League, primarily spending his time with the Golden State’s Warriors affiliate. He also played with Carmen’s Crew in The Basketball Tournament and is currently pursuing a doctorate degree.

Crompton won three NCAA men’s sabre titles during his four seasons at Ohio State from 2003-06. HE was the national champion as a freshman in 2003 and defended his title the following year, closing out his collegiate career with the same trophy in 2006. Crompton was a four-time All-American, claiming three first-team nods and second-team honor after finishing seventh at the 2005 NCAA Championships.

Ohio State won the team title at the 2004 NCAA Championships and finished in the top four in each of Compton’s four seasons. The Buckeyes won four Midwest Collegiate Conference team championships and four men’s conference titles. Compton carried a 105-5 record during that stretch.

The Newark, N.J., native earned several accolades on the international level and was ranked at the top of the United States Senior Division. He won gold medals for the U.S. National and Pan American squads.

Harris Griffin was an all-conference sprinter at Ohio State from 2004-08, winning the 2008 Big Ten Medal of Honor and four individual Big Ten Championships in the 60m, 100m and 4x100m relay championships. She was also an All-American during the indoor season for 2007 in the 400m and claimed the same distinguishment in the 2008 outdoor season for the 400m and the 4x400m relays.

She is the women’s 400m program record holder for both the indoor and outdoor seasons. Harris Griffin also excelled in the classroom and was a four-time Academic All-Big Ten recipient.

After graduating from Ohio State, Harris Griffin completed her graduate certificate at Iowa State. She is currently working on her doctorate in clinical nutrition, human nutrition and functional medicine at the University of Western States. Harris Griffin also founded the Generations Nutrition and Wellness, a fitness service in Atlanta, Ga.

Markwordt is the all-time leader in goals (181) and points (314) and ranks third in assists (133) for the Ohio State women’s lacrosse program. She is the only player in the team’s history with more than 300 points, and her 4.60 points per game average is among the top 30 in NCAA Division I history.

The Woodbine, Md., native was a two-time All-American and four-time All-Midwest Region player from 2009-12, winning awards like the 2009 American Lacrosse Conference Rookie of the Year and first-team All-ALC honors in 2011 and 2012. Markwordt ended her decorated career on a program-record 65-game point streak, collecting more than 90 points in her senior season.

Markwordt was a three-time Academic All-Big Ten selection and earned her master’s degree in medical dietetics from Ohio State. She is currently a medical dietician in Washington D.C.

Nagelson was a three-year letterwinner for Ohio State baseball from 1964-66. He was a featured player on the program’s only national championship team. That year, the Buckeyes went the distance, winning the College World Series in Omaha, Neb., behind a two-hit performance and a team-high three RBIs from Nagelson in the title-game victory over Oklahoma State.

In three seasons, Nagelson appeared in 84 games and collected a .253 batting average with 69 hits and 12 home runs. Nagelson led the Buckeyes in RBIs in each of his last two seasons. He finished his career with 68 total runs batted in.

Nagelson was drafted by the Cleveland Indians in the 14th round of the 1966 MLB Draft. He played four professional seasons with Cleveland and Detroit.

This is part one of Buckeye Sports Bulletin’s coverage of the Ohio State Athletics Hall of Fame Inductees. Look out for Part 2 tomorrow morning (June 23) at 10 a.m. EST.