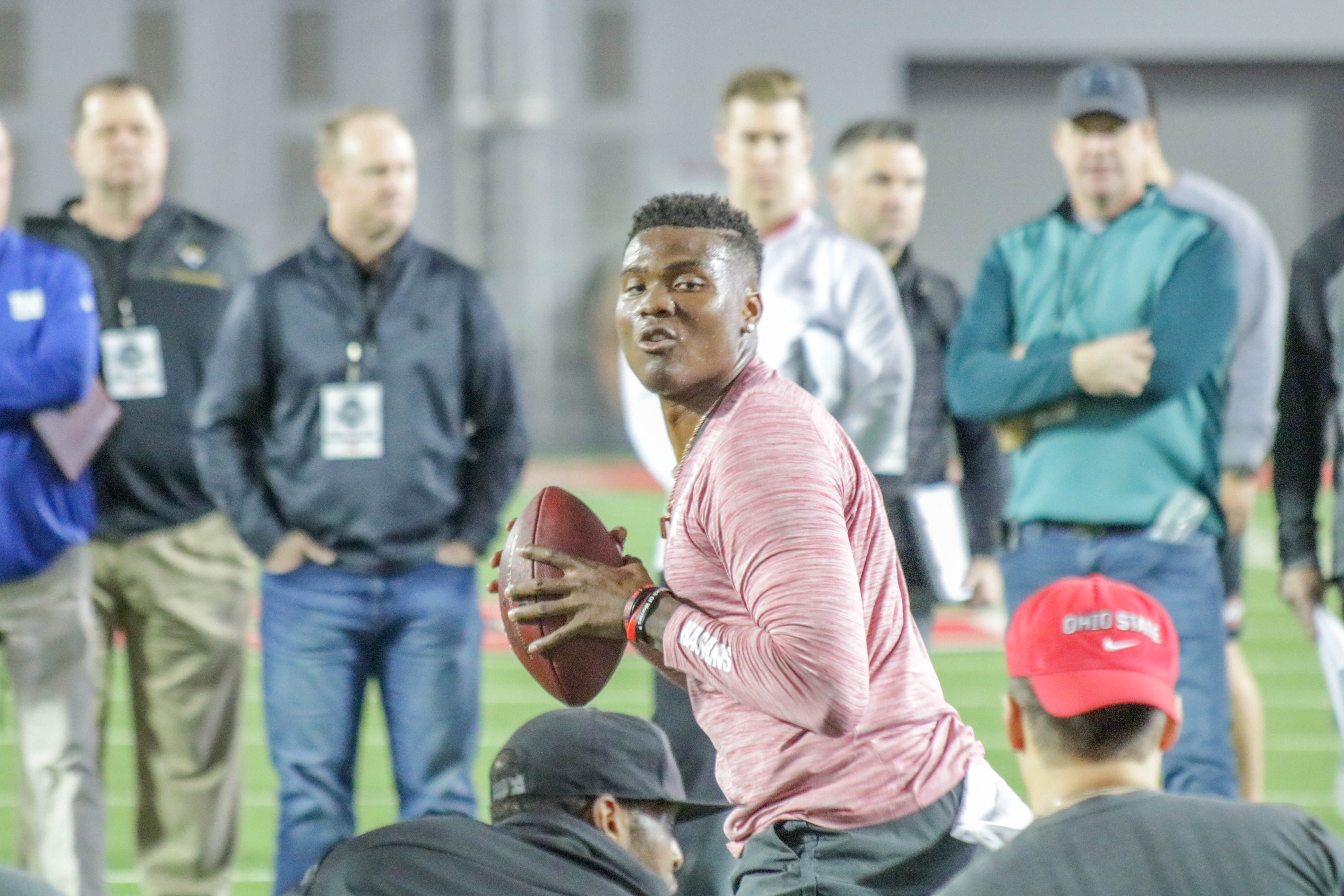 With all eyes on Dwayne Haskins, the former Ohio State quarterback delivered Wednesday at the Woody Hayes Athletic Center.

Before all 32 NFL teams — four head coaches, four general managers and an estimated crowd of 130 league personnel in attendance for pro day — Haskins embraced the hype as he fired and completed just about every pass attempted across his workout, looking to leave no doubt before the draft.

While momentum has been building over the past month for Oklahoma’s Kyler Murray to be taken first among quarterbacks when the April 25-27 draft arrives in Nashville, Tenn., Haskins made his case.

“It’s up to the team that wants to pick me,” he said, “but I feel like I’m the best player in the draft.”

After he reportedly had dinner Tuesday in Columbus with the Giants, Haskins drew heavy attention from New York head coach Pat Shurmur and offensive coordinator/quarterbacks coach Mike Shula over the course of his session. Along with several other Giants staffers, Shurmur and Shula directed all attention to Haskins and OSU head coach Ryan Day as they evaluated their potential quarterback of the future.

“I think they’ve kind of been forgetting about Dwayne since he’s been here,” former Ohio State wide receiver Parris Campbell, who reunited with Haskins at pro day, said of quarterback-needy franchises. “Especially in the Heisman, you would turn on the Heisman watch and you wouldn’t see Dwayne. But I think he just continues to prove everyone wrong, continues to check boxes and continues to show that he is the No. 1 quarterback.”

Haskins spent his childhood in Highland Park, N.J., before the family moved to Potomac, Md., where he attended Bullis for high school. The 6-3 3/8, 231-pounder grew up as a Giants fan and has not shied away from what he thinks about a homecoming of sorts to East Rutherford, N.J., at MetLife Stadium.

“We’ll see,” Haskins said when asked about the Giants, who possess the No. 6 overall pick. “They definitely have shown interest and it’s not up for me who gets to pick me. So I’m going to give every team everything I’ve got in all the meetings and all the workouts I have coming up to the draft. To be able to be considered by New York as a kid growing up as a fan, it’s just a true blessing.”

Before he became head coach Jan. 2, Day’s second year as offensive coordinator/quarterbacks coachin 2018 oversaw the development of Haskins — a transformation from raw underclassman to Heisman Trophy finalist. After the latest physical performance, Day reiterated his thoughts on Haskins.

“I thought it looked natural,” he said of Haskins’ passes. “It didn’t look forced. I think sometimes when you watch a quarterback, you’re like, ‘How’s he going to throw?’ Dwayne threw the way Dwayne throws.

“Our receivers caught the way that they caught. And you just saw (wide receivers) Terry McLaurin and Johnnie (Dixon) and those guys work hard to go catch the ball and be fast. I mean, that’s what practice looked like, that’s what routes on air looked like and that’s what it looked like today.

“So I think when it looks natural like that, it doesn’t look forced. And just kind of the way they throw and catch, it’s pretty impressive.”

Haskins assessed his performance, admitting how he missed two passes. “It pisses me off still,” Haskins said, but his outlook on where he stands about a month away from the draft appears optimistic with the Giants still among the possible landing spots.

“I don’t listen to the noise,” Haskins said. “It’s like playing in the game. I don’t really hear anybody in (Ohio Stadium) either. Just being able to go out there and throw was a lot of fun, last time with my guys and it’s been a blast.

“I’ve been ready for the NFL. I’ve been preparing for it all my life. I knew I was going to play in the NFL, before the season even started. After declaring and being a professional athlete, life hits you fast. So definitely being able to learn on my toes and it’s been definitely a hard but fun experience.”