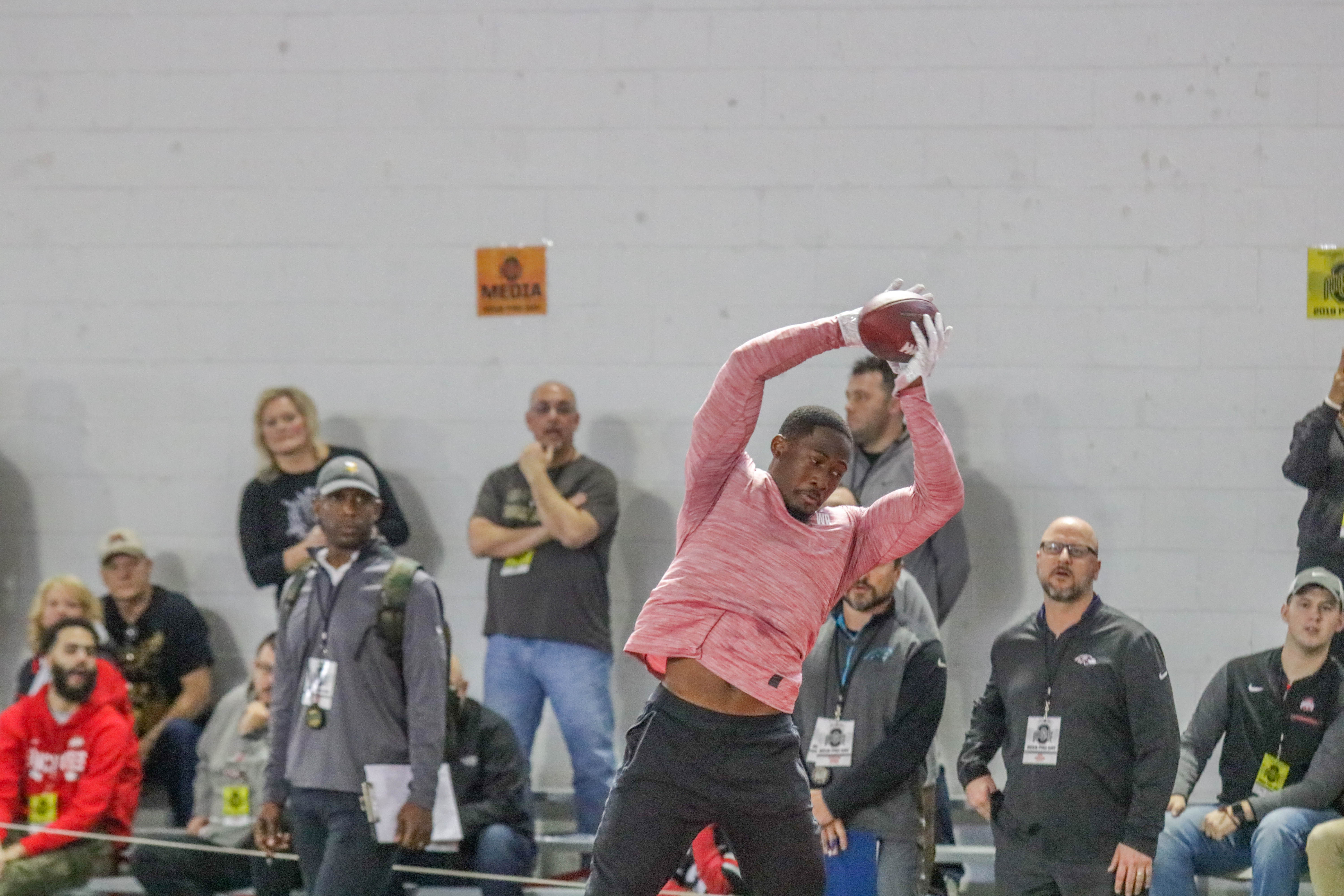 While two of Ohio State’s top prospects did not participate entirely as defensive end Nick Bosa stands on his results at the NFL scouting combine and cornerback Kendall Sheffield continues to recover from his left pectoral muscle injury, quarterback Dwayne Haskins and his fellow Buckeyes reunited.

In front of all 32 NFL franchises, OSU’s showcase from 11:30 a.m. went into the afternoon until about 2 p.m. with four head coaches and four general managers among approximately 130 personnel on hand.

“I think, first off, it shows you where we’re at with our development of guys,” said head coach Ryan Day. “And the fact that we had this many people here in the NFL and the personnel that we had in the building today, and then to see the show that they put on is really impressive and the things that they’re talking about with our players in terms of what kind of guys they are, how they play, physically, how they’re ready. To see some of these guys — especially the guys who have been in the program for five years — the work they’ve put in to be in this moment, it’s pretty cool.”

“When an Ohio State player comes into the league, you know you’re getting someone who is mature and who’s played at a high level,” Spielman said. “They’ll be ready to handle what’s put in front of them.”

While Bosa watched, the spotlight moved solely to Haskins, who teamed back up with Ohio State’s wide receivers and running back Mike Weber when he threw. Parris Campbell, Johnnie Dixon and Terry McLaurin moved around in a variety of routes, while Weber caught passes out of the backfield.

“To have the opportunity to be an early draft pick is a dream come true of mine since I was a little kid,” said Haskins, whose presence drew heavy attention from Shurmur and Giants offensive coordinator/quarterbacks coach Mike Shula before and after the workout. “I’m just giving it all I’ve got, every opportunity I get with every team.”

Campbell went down on an intermediate route and “experienced a little bit of hamstring tightness” before he shut down his route-running early, which led to more focus for Dixon and McLaurin. The products of wide receivers coach Brian Hartline helped Haskins out, making nifty grabs off the line of scrimmage from the 40-yard line to the red zone.

“That out was pretty sweet — yeah, the one in the end zone,” said McLaurin, who tightroped the front-left pylon on bullet from Haskins during the red-zone portion of the throwing session. “I liked that one. That showed I was able to get up, my vertical ability and get two feet in. They were raving about my awareness to get two feet in at all times.”

While several Buckeyes participated in the 20-yard shuttle and three-cone drill — such as defensive tackle Dre’Mont Jones, Dixon, McLaurin and Weber — offensive lineman Malcolm Pridgeon was OSU’s only product to run the 40-yard dash. The starting left guard from the 2018 campaign was joined by fellow offensive linemen Michael Jordan, Demetrius Knox and Isaiah Prince in positional drills.

“I proved how much of a hard worker I am,” Jordan said. “Finished through every drill. Felt like I showed that I’m going to do whatever I need to do to show them that I’m a hard-working, persevering guy.”

Knox, who suffered a Lisfranc injury Nov. 24 in Ohio State’s 62-39 win over Michigan at Ohio Stadium, showed signs of progress since he saw his fifth-year senior season ended four months ago. Knox, Pridgeon, linebacker Dante Booker and kicker Sean Nuernberger were the four Buckeyes not invited to the combine who came out for pro day — although Booker did not appear to do much.

The draft takes place April 25-27 in Nashville, Tenn., with a handful of the aforementioned players in the mix for first-round selections. Bosa and Haskins are believed by analysts as top-10 picks, while Campbell and Jones are candidates for the later portion of the opening round.