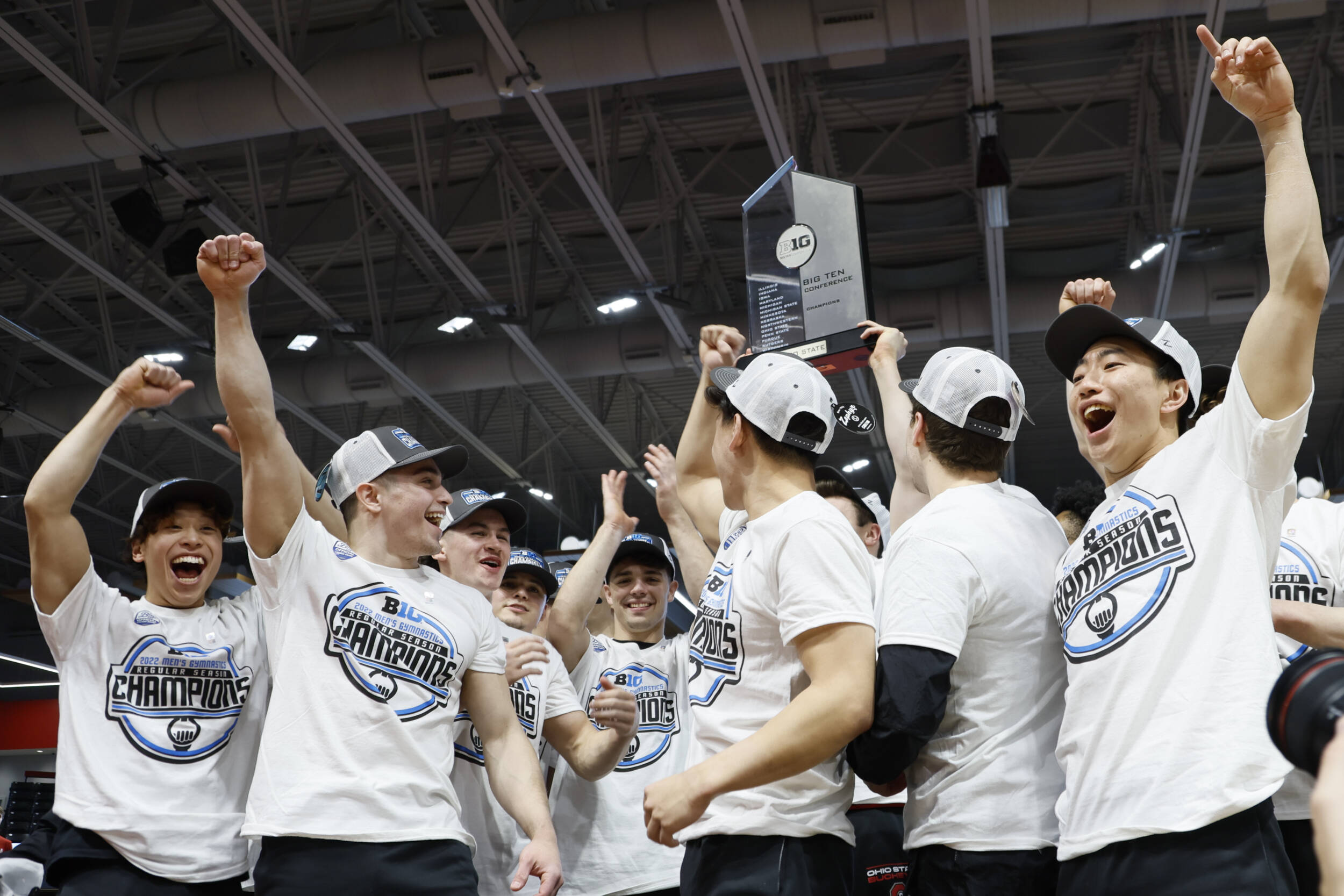 Ohio State men’s gymnastics defeated Nebraska in its regular-season finale to claim a share of the Big Ten Championship on Sunday afternoon. It is the first regular-season title for the Buckeyes since the conference started the award in 2019 and the third-overall title under Rustam Sharipov.

“I’m very proud of our team’s effort today and our winning performance,” Sharipov said. “We were able to honor and celebrate our six seniors and send them off on a good note as we head into the postseason. Thank you to all who came and supported us. The energy was electric.”

Jesse Tyndall won three events: floor (14.250), parallel bars (13.350) and high bar (13.900). He competed in all six events for Ohio State and scored an 82.300 in the all-around, the best finish for a male gymnast this season. His high bar routine clinched the meet win and the team’s share of the conference title.

Trevor Cummings scored a 14.700 on the pommel horse to finish second, while Justin Ah Chow scored a 14.100. Donovan Hewitt won the rings with a 14.300 — his career-best score in the event — and Dexter Roettker earned a career-best 13.650 on the high bar.

Ohio State junior setter Mac Podraza and junior libero Kylie Murr were among 38 student-athletes selected to the United States women’s volleyball collegiate national team, the organization announced on Monday. The Buckeyes are one of eight programs with more than one player in the program.

Podraza was named to the AVCA All-American third team after the 2021 season. She also earned AVCA All-Region and first-team All-Big Ten honors. Podraza led the country in assists per set with 11.97 and finished the year with 1,282 total assists. This season, she recorded single-match career highs in aces (four), digs (18) and blocks (six, twice).

Murr made it on the AVCA All-Region squad with a team-leading 504 digs this year — the sixth-best mark in school history. Her 4.42 digs per set were second all-time in a single season behind her first-year average. Murr has 1,405 digs at Ohio State, the fourth-most career digs for a Buckeye. She recorded at least 10 digs in 29 matches this season and passed the 20-dig mark four times, with her season-high set at 30 against Minnesota.

Jacques hit record numbers in her fourth season as a Buckeye while helping the program to a national title. She scored the most points for a defenseman in all of women’s collegiate hockey this season, and her final points total (59) is the second-most recorded by a true defenseman in the last 20 years.

The Toronto, Ontario native was elite on both ends of the ice this year. She was on the ice for 173 of the team’s goals this season, including all three scores in the national title game. Her plus-50 on-ice rating was the best mark in the country.

WCHA Defensive Player of the Year

Four-time WCHA Defender of the Month

Eight-time WCHA Defender of the Week