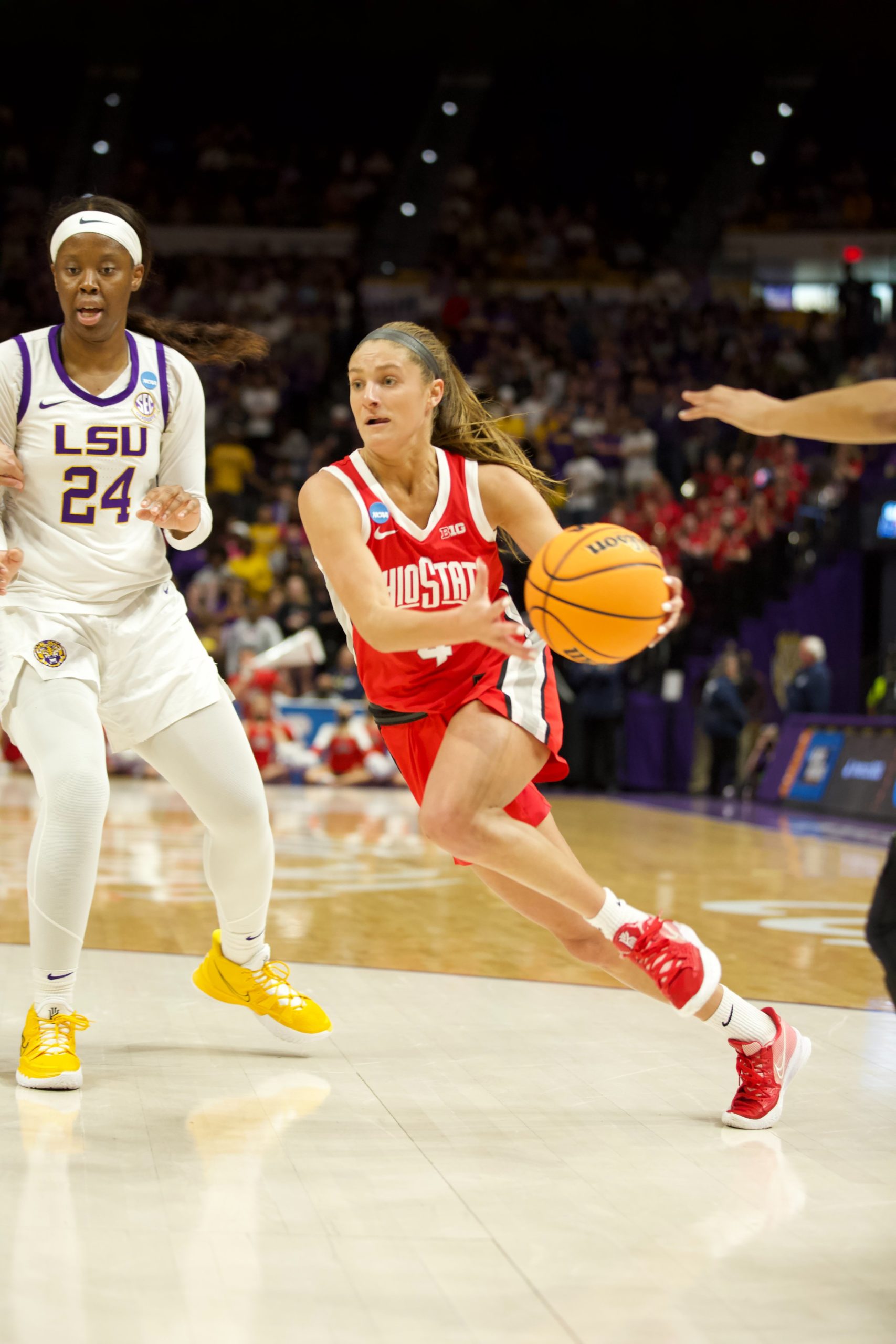 Ohio State spoke at length following the win over Missouri State about using defense to help generate offense, and the Buckeyes did exactly that to start things off against LSU, forcing seven turnovers in the first quarter that resulted in 10 points.

Beyond forcing turnovers, Ohio State forced a number of missed shots, as the Tigers were just 8 of 24 from the field and experienced two scoring droughts of over four minutes. Junior guard Jacy Sheldon accrued three steals in the first frame and had six points as the Buckeyes led 12-8, closing the quarter on an 11-0 run.

Ohio State knew heading into this contest that defending the triple was not one of LSU’s strengths this season, and the Buckeyes took advantage in the second frame by hitting 5 of 9 from beyond the arc, led by junior forward Rebeka Mikulasikova’s two makes from deep.

Her pair of triples, sandwiched around a layup, helped pushed Ohio State’s lead to 26-20, and a 3-pointer from sophomore guard Rikki Harris then pushed things to 29-20, tied for the Buckeyes’ largest lead of the game in the first half.

The Tigers’ two leading scorers, guards Jailin Cherry and Khayla Pointer, scored on back-to-back possessions to make it 31-26 with under three remaining, but after a triple from senior guard Braxtin Miller to make it 34-26, both teams were held scoreless for the remainder of the half and Ohio State took the lead into the break. The Buckeyes were led in the first half by Mikulasikova’s eight points and spread the ball out well, with seven Buckeyes scoring a basket in the first 20 minutes.

Harris and Sheldon got a pair of early baskets to start the third, forcing LSU head coach Kim Mulkey to call a timeout less than two minutes into the second half as the Tigers faced a 38-26 deficit. This did not solve any woes, however, as LSU suffered a shot-clock violation out of the timeout and watched senior guard Taylor Mikesell score on the other end to make it 40-26.

Ohio State later pushed the lead to 19 points, 49-30, after a pair of baskets from Mikesell and scores from Mikulasikova and Miller, but the Tigers threatened to get back into the game by forcing four Ohio State turnovers in the span of two minutes. The Buckeyes were undeterred, forcing an LSU turnover and scoring eight straight to push the lead to 57-33 with 1:34 remaining, and finishing the quarter up 57-37.

The Tigers, no strangers to comebacks after erasing a 10-point deficit against Jackson State in the first round, started building momentum in the fourth, chipping away at Ohio State’s lead until the Buckeyes led by just 14 following a basket from Pointer. As she’s done in Ohio State’s time of need this season, Mikesell then connected on a triple on the next possession, pushing the lead back to 67-50 with 5:26 remaining.

Ohio State saw its lead shrink to as few as 11 points in the game’s final minutes and turned the ball over a handful of times, but the Buckeyes – whether it was a block from freshman guard Taylor Thierry or forcing a miss by the Tigers – made the plays they needed to down the stretch to secure the 79-64 win.

Sheldon led the Buckeyes with 23 points, going 9 of 17 from the field. Miller had a team-high nine rebounds, while Sheldon dished out eight assists. Pointer led the Tigers with 32 points on 12-of-30 shooting.

This will be the 12th appearance for Ohio State in the Sweet 16 and the third for head coach Kevin McGuff in his ninth season with the Buckeyes. Ohio State will face No. 2 Texas on Friday at 4 p.m. with an Elite Eight berth on the line.