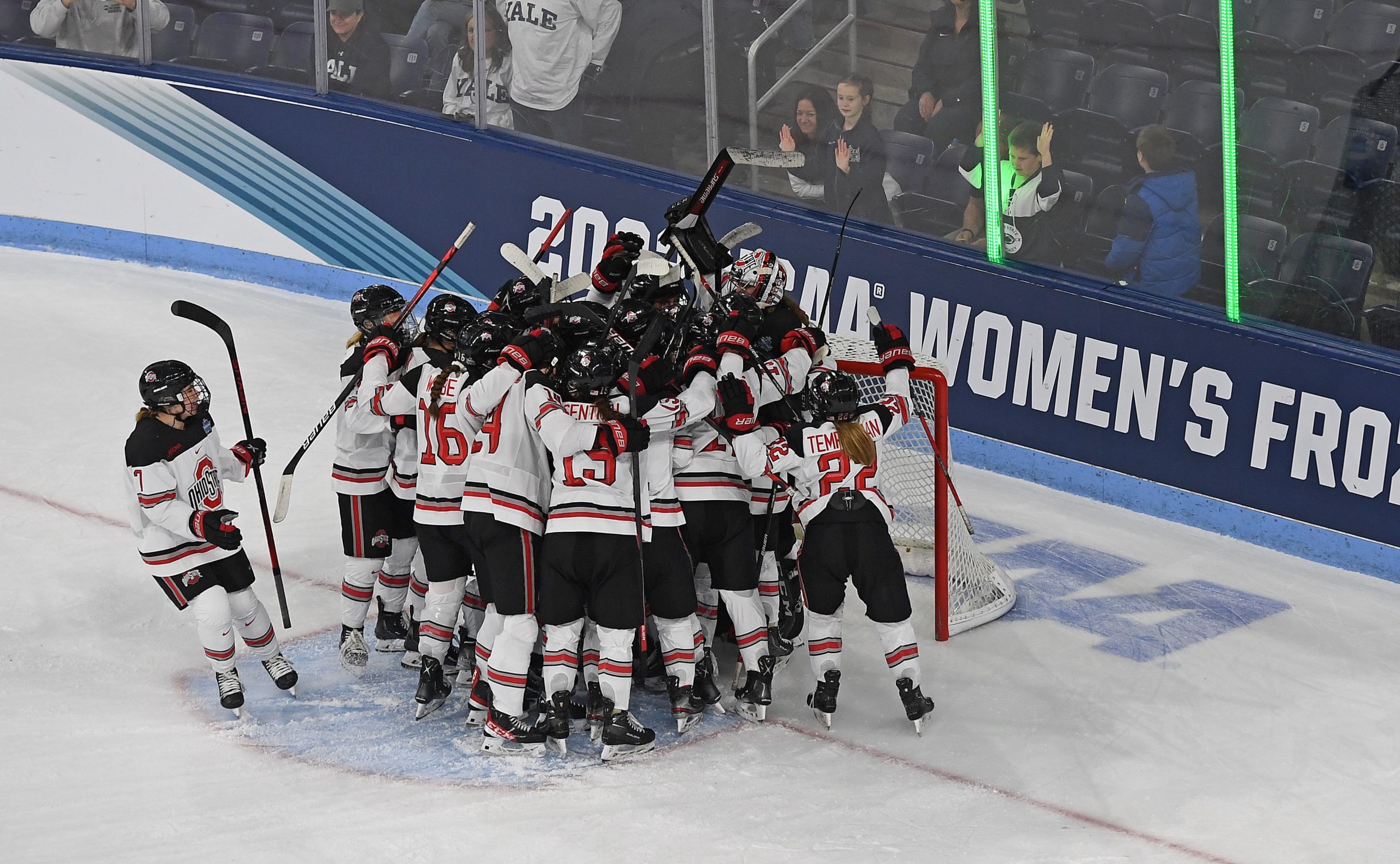 On March 11, Nadine Muzerall made a straightforward claim that the Buckeyes were the team to beat at the 2022 NCAA Frozen Four.

“I don’t think we have a flaw,” Muzerall said before facing Quinnipiac. “If I were an opposing coach, I think it’d be tough to find a weakness. We’re a 200-foot hockey team, and I think this is the first time we have a true Patty Kazmaier recipient. I think there’s a lot of firsts, and if I were a gambling gal, I would say this is our year.”

The sixth-year Ohio State head coach led her team into its first-ever championship game on Sunday evening in University Park, Penn. The No. 1-overall Buckeyes defeated Minnesota-Duluth, 3-2, writing their names in history books and returning to Columbus as national champions.

“That was a true national championship game,” Muzerall said after the win. “I am very proud of how far we’ve come over the last six years — these transfers and Liz Schepers sticking around another year and getting the job done. We were just overjoyed with excitement and felt that we had the entire state behind us and cheering for us. We created a Cinderella story, and we’ll enjoy every minute of it.”

Neither Ohio State nor Minnesota-Duluth scored in the first period. The Buckeyes outpaced the Bulldogs in shots, 10-8, with forward Clair DeGeorge and defenseman Lauren Bernard sending two pucks on the net. DeGeorge also won three of her seven faceoffs.

Minnesota-Duluth captain Anna Klein committed a hooking penalty in the second period, allowing Ohio State’s top-ranked power play to take the ice. Within 20 seconds, DeGeorge found forward Paetyn Levis in front of the net to put their team up 1-0. Despite near misses from Levis and Patty Kazmaier finalist Sophie Jacques, the Buckeyes failed to extend their lead in the frame. Instead, the Bulldogs scored their first goal at 12:42 when forward Naomi Rogge capitalized in front of the net and tied it at one-all.

“Credit to Duluth because they kept counterpunching and tying up the game and never quit,” Muzerall said. “We talked about resiliency before the game, and our team looked brilliant today. There were areas of the ice that were a little weak in previous weeks. We tightened up our neutral zone, our transition, our back pressure, and I thought we did a great job scoring on our power play.”

Less than 30 seconds into the third period, DeGeorge went to work. Ohio State forced a turnover in the defensive zone and started a fast break, which caused Minnesota-Duluth goaltender Emma Soderberg out of the net. DeGeorge finished the charge with an unassisted goal to put the Buckeyes in front. However, the Bulldogs answered immediately as forward Élizabeth Giguère beat Thiele near the crease.

Thirteen minutes after Minnesota-Duluth knotted the score at two-all, Ohio State forward Kenzie Hauswirth pushed a puck past Soderberg to give her team a 3-2 lead. The Quinnipiac transfer had only scored four goals in the previous 31 games, but the fifth goal could not have come more opportunity. Several Buckeye skaters swarmed Hauswirth to congratulate her for the go-ahead score.

Hauswirth said scoring the game-winning goal felt surreal. During the post-game press conference, she realized that she couldn’t recollect the memory of the puck hitting the back of the net.

“To be completely honest, I don’t remember it that much,” Hauswirth said. “Coach kept saying to throw pucks on net, and I had a chance to throw it on the net, and it worked out. I think it hit a defenseman’s stick, but it was amazing to get that goal for the team.”

Ohio State held onto its one-goal lead for the remaining seven minutes to win the program’s first-ever NCAA Championship. Levis won the game’s first star, while Hauswirth and DeGeorge took the second and third stars. Thiele made 17 saves in the net.

The Buckeyes outshot the Bulldogs, 39-19, and tied their opponent with 28 faceoff wins. Minnesota-Duluth made 15 blocks to Ohio State’s six.

Schepers, a two-time captain, said it was a complete performance from her team in the national championship. As a fifth-year senior, the Mound, Minn., native endured the worst and best of years in an Ohio State uniform. For Schepers, finally reaching the precipice of women’s college can’t compare to any other experience.

“I don’t even know if I realize what’s going on because it’s so special,” Schepers said. “This team has the fingerprints of so many leaders that came before me. So many people who were part of this program put in the dirty work and set the standard for culture to work out to the point where it runs itself.

“When you put on that Ohio State jersey, there’s so much pride, and we wanted to carry the torch for those teams that struggled and those teams that went through the grinding years of getting Ohio State where it is today. I am so thankful for this program and for being a part of that journey. It makes us that much sweeter.”