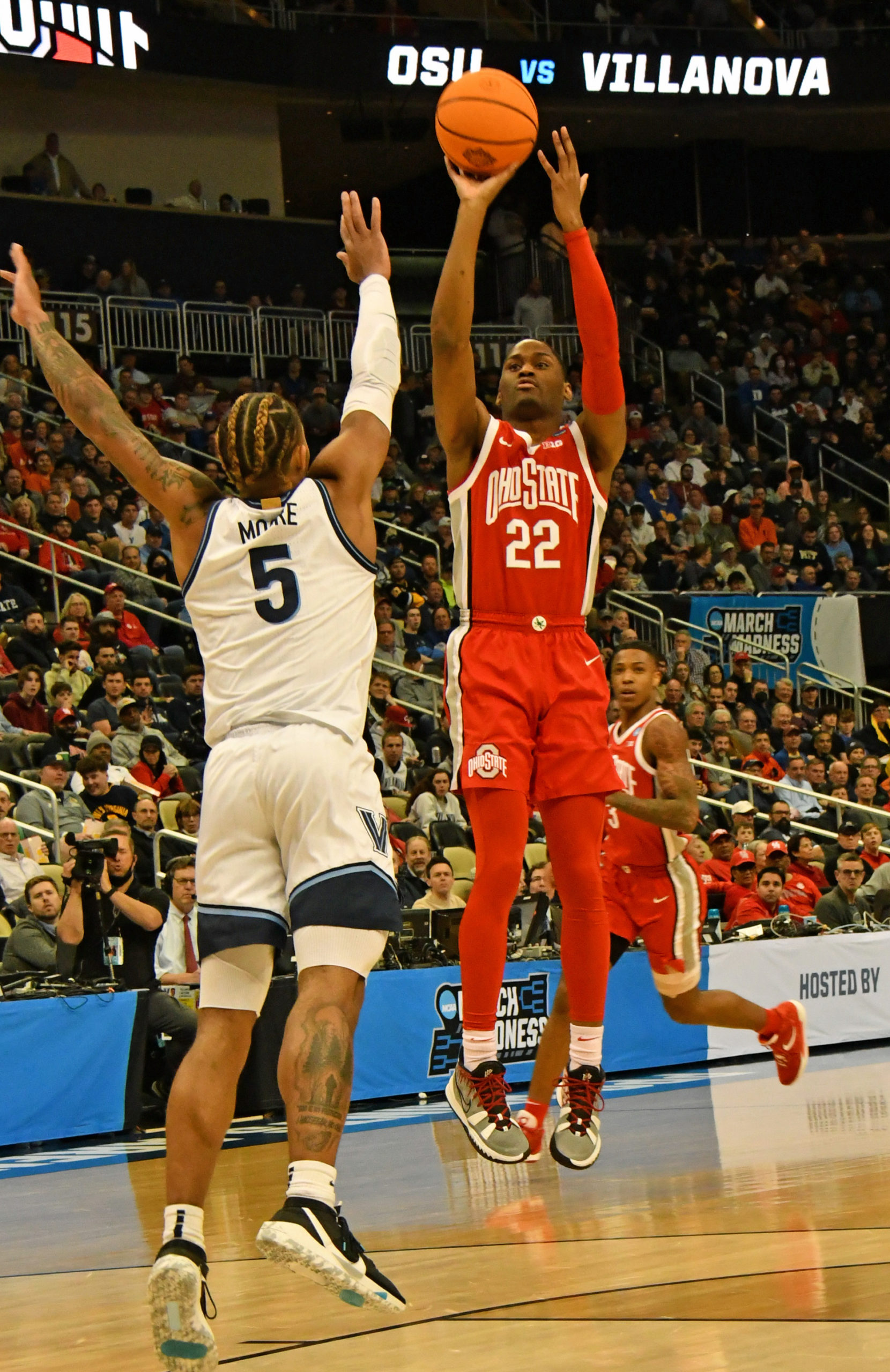 It’s officially decision time in Columbus. Ohio State saw its season come to a close on March 20 with a 71-61 loss to Villanova in the second round of the NCAA tournament and enters now into the period of the offseason that will determine its roster – and potentially its outlook – for the upcoming season.

Among some of Chris Holtmann’s Buckeyes, the decisions have already been made, either through the expiration of their eligibility or through a desire to forgo any extra eligibility and move on. In the former group is center Joey Brunk, guards Cedric Russell, Jimmy Sotos and Jamari Wheeler and forward Kyle Young. Brunk, Russell and Wheeler spent just one season with the Buckeyes as graduate transfers, while Sotos did a two-year stint after transferring from Bucknell.

Young, who suffered an injury in the final minutes of the Villanova game, played five seasons with the Buckeyes and used his COVID season of eligibility to return for 2021-22.

“I’ve loved every minute I got to play in a Buckeye uniform and I am so grateful I had the opportunity to compete for this university,” Young shared on Twitter after the game. “I’m going to miss this with all of my heart but want to say thank you for all the love and support over the years.”

Senior wing Justin Ahrens and junior forward E.J. Liddell slot into the second group, meaning that a return technically is possible but both players have signaled that they plan to depart after this season. Ahrens has a COVID year if he wants it after an up-and-down senior campaign, while Liddell could technically eschew the NBA for a second year and return to Ohio State for his senior – and even super senior – season.

However, with a March 21 ESPN mock draft slotting him in as the 18th pick to the Chicago Bulls and with his statements throughout the season and after that final matchup, a return seems overwhelmingly unlikely.

“I don’t think reality has really kicked in yet that I wouldn’t be able to – this certain group of guys, a lot of guys these last games, older guys, seniors. It’s tough, man. I’m really hurting inside,” Liddell said after that game. “I wish I could have done more to help get it done. This group of guys was really determined. We fought through a lot of adversity and injuries this year. I gave my all this year. I wish I could have done a little bit more, though.

“Right now I’m just reflecting on enjoying the moments I have with these guys, not even thinking about that, really haven’t thought about that process yet. But this one stings. I’m not going to say I have thought about it because I really haven’t. This moment right here, I didn’t want it to happen, ever.”

Entering tournament play, ESPN’s Mike Schmitz praised the Illinois native’s development this season and compared him to players like Draymond Green – a four-time All-Star for the Golden State Warriors – and Grant Williams, who has found a contributing role with the Boston Celtics this season and was a first-round pick in 2019.

“One of the most improved players in college, Liddell has turned himself into a first-round pick by modernizing his game on both ends of the floor as a powerful 4/5,” Schmitz wrote. “He has trimmed down, evolved as a perimeter shooter, expanded his playmaking off the dribble, become an asset in switch situations and developed into a true defensive anchor for the Buckeyes thanks to his stellar timing and nonstop motor.

“Scouts still have questions about Liddell’s long-term upside as he stands no taller than 6-7 with average positional length, a flat jumper that might take time to adjust to the NBA line and a somewhat power-reliant game. Former college players ranging from Draymond Green to Grant Williams come to mind when watching him.”

The real decisions Ohio State will wait on with bated breath, potentially through the June 1 underclassman draft declaration date and the June 13 deadline for upperclassmen are those of freshman guard Malaki Branham, redshirt senior wing Justice Sueing and super senior forward Seth Towns.

The latter two are widely expected to return for their sixth and seventh seasons with the Buckeyes, respectively. Sueing missed all but two games this season and would have the chance to star on next year’s group and resurrect his pro prospects, while Towns has dealt with injuries for several years, missed the entirety of this past season and has yet to piece together a full year with the Buckeyes since transferring ahead of the 2020-21 season.

Branham’s plans are the most in question. Holtmann told media after the loss to Villanova that he expects the star freshman to go through the draft process as Liddell did last season, which includes the combine from May 16-22 and, if he so chooses, the G League Elite Camp that hosted Liddell and Duane Washington Jr. – ultimately springing the latter to a combine invite – last season. The NBA has yet to announce dates or participants for that event.

“I’ve not had specific conversations with (Malaki’s) family,” Holtmann said. “I will when we get back. I’m certain, I’m assuming he’ll do everything in terms of going through the process. It’s certainly out there. It’s certainly a possibility. I’ll advise him as they ask for. We’ll have conversations with his family and I’ll support whatever decision they think is best.”

Branham has seen his stock skyrocket in the back end of the season, culminating with the No. 16 spot in that aforementioned ESPN mock draft, which would send him to the Houston Rockets to team up with former Buckeye forward Jae’Sean Tate. ESPN’s Jonathan Givony mentioned Branham as a potential lottery selection because of the upside he showed as a freshman.

“Branham looked like the best player on the floor against Villanova, despite only being a freshman,” Givony wrote. “Ohio State has gradually shifted most of their offense to run through him as the season has progressed, and he did a great job of making shots keep the game close before the Buckeyes eventually bowed out. Branham’s size, frame, length, scoring instincts and shot-making prowess off the dribble and with his feet set make his game look seamlessly translatable for what the NBA is looking for at his position.

“He got to his spots in the mid-range and rose up beautifully with his high release point, and showed he can do a little more than that too by facilitating for others and showing competitiveness defensively one-on-one. While he has some things to work with as a ball-handler and off-ball defender, the fact that he’s 18 years old, has made such impressive strides as the season moved on and plays with a unique combination of aggressiveness and poise could put him in lottery conversations.”

Schmitz projected him as a secondary ball-handler a la Cleveland’s Caris LeVert before the tournament and projected another potential leap if scouts came away impressed with his tournament run.

“Scouts will be evaluating Branham’s ballhandling and passing to discern whether they think he can play more of an on-ball role in the future, as that would greatly boost his value given that he’s most impactful defending 1s and 2s,” Schmitz wrote. “But in terms of his age, positional length (6-foot-11 wingspan), shooting and productivity, Branham checks a lot of the boxes teams look for in a young guard prospect. A deep NCAA tournament run could earn him looks in the late lottery, similar to what we saw from (Alabama guard and 2021 lottery pick) Joshua Primo last year.”

Branham scored 14 points against Loyola Chicago’s Lucas Williamson – considered an elite defender – on 5-of-7 shooting with five rebounds, four steals and two assists, while he led the charge against the Wildcats with 23 points on 10-of-19 shooting, including six in a row as the Buckeyes surged in the second half.

That’s a full roster according to NCAA rules, but to go without at least one transfer would be essentially unheard of in the modern game, and it’s unclear if the trio of seniors – all of whom would be using their COVID year to return – would count against the scholarship limit. COVID seniors did not count against rosters this past season. Holtmann said he expects to hit the portal in the coming weeks.

That process has already begun, with the Buckeyes reaching out to several targets.