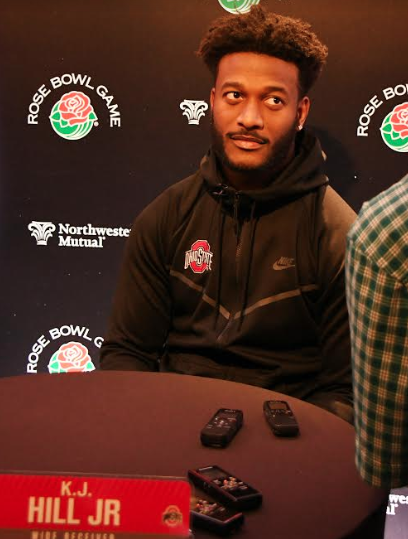 LOS ANGELES — While junior defensive tackle Dre’Mont Jones and junior running back Mike Weber have already declared for the 2019 NFL draft, several other Ohio State teammates are about to be on the clock as well.

Among those Buckeyes with decisions to make after No. 6 OSU (12-1) plays No. 9 Washington (10-3) Tuesday in the Rose Bowl at 5 p.m. ET on ABC, junior H-back K.J. Hill weighs his options as he prepares for the Huskies.

“I’ve been giving it a lot of thought, because this is my fourth year,” Hill said Sunday at Ohio State media day outside Rose Bowl Stadium. “I have one more year of eligibility left. I’ve been talking with my family about it and the coaches about it, so I feel like I’ll just have to make a decision after this Rose Bowl.”

On the season, Hill has hauled in 67 passes for 831 yards (12.4 average) and six touchdowns over 13 games — mostly surpassing the numbers he had through his first couple of campaigns with 74 receptions for 811 yards (11.0 per) and four scores in 25 contests.

The 6-0, 198-pounder emerged as Ohio State’s sure-handed playmaker in 2018 and enters “The Grandaddy of Them All” second among Buckeyes receivers behind only fifth-year senior H-back Parris Campbell — who with fifth-year senior wide receivers Johnnie Dixon and Terry McLaurin is graduating.

“With all the seniors gone — Parris, Johnny, Terry — I’d have to take on that role as being the leader, the leader-leader of the room,” Hill said. “I’d have to — I’ll have (junior wide receivers) Ben (Victor) and Austin (Mack) also as seniors. So I feel like with those three gone, we’ll have to be the next three to step into those shoes.”

Despite the attention around Hill and others — namely his quarterback, sophomore Dwayne Haskins — he and OSU have had to delay any discussions about the looming NFL futures until after the team returns to Columbus from Pasadena, Calif.

Outgoing head coach Urban Meyer is retiring, handing Ohio State over Jan. 2 to incoming head coach and offensive coordinator/quarterbacks coach Ryan Day, but he keeps his approach with the same intensity and has asked for the Buckeyes to reciprocate that laser focus.

“Just out of respect for our players and where we’re at, I think that’s inappropriate for me to even spend time thinking about that, because I’ve asked our players to shut it down,” Meyer said Monday at the Rose Bowl joint press conference inside the Residence Inn LA Live. “There’s girlfriends, families, uncles, everybody coming out to visit right now — I’ve asked them to shut it down. There’s been talk forcing people like our quarterback (Haskins) to make decisions about the NFL, and I’ve asked him to just shut it down until after this game.”

Hill has until Jan. 14, when the deadline for underclassmen hits, to make his decision on the NFL. Which way is he leaning?

“I feel like I can do both,” Hill said. “I feel I had a great season this season. If I was to leave, I would be leaving on a good note. Then again, if I did come back next year, a lot can happen with more touches on the ball, being in the offense as a leader, potential captain. There’s a lot that comes with it. There’s a lot of potential.”