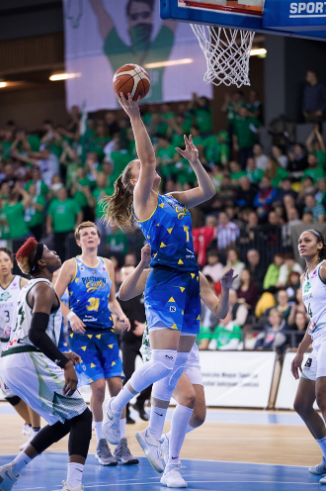 The incoming wave ranked fourth nationally in espnW’s HoopGurlz Class Rankings while its group sat behind No. 3 Maryland, No. 2 Stanford and No. 1 South Carolina with five before Mikulasikova’s pledge.

After a 2018-19 season in which head coach Kevin McGuff had to replace six departures from 2017-18 with four graduate transfers and three freshmen, Ohio State welcomes Mikulasikova among its star-studded line of reinforcements off a rebuilding campaign.

The Buckeyes exceeded expectations with a 10-8 record in Big Ten play, but fell flat to end the year at 14-15 overall with three straight losses, including first-round exits from the conference tournament and Women’s National Invitation Tournament (WNIT).

Mikulasikova, who turns 20 on July 31, brings OSU experience from overseas.Since the 2016-17 season, she has been playing professionally in Piestany, Slovakia, for Piestanska Cajka.

The club plays in the 16-team European Women’s Basketball League (EWBL), where Mikulasikova averaged 7.1 points and 4.4 rebounds across the first nine games of the 2018-19 campaign.

Late in the 2018 class, McGuff made a similar move with Pecs, Hungary, product Dorka Juhasz. Her addition last year — she committed March 5 and signed April 16 — paid off in a big way for McGuff.

Juhasz joined guard Janai Crooms and forward Aaliyah Patty in the freshman group for 2018-19 and combined to provide McGuff’s squad with the youth movement he needed during his transitional sixth year in Columbus.

Juhasz paced the team in points (11.7) and rebounds (9.0) per game, emerging among the rising stars in the conference on the Big Ten’s freshman and second teams.

Congratulations to 2019 6’3 C Rebeka Mikulasikova and her commitment to @ohiostatewbb. The 2x player of the week in EWBL will be a major force in the Big 10. We’re beyond excited for this young lady and all the hard work she’s put in! pic.twitter.com/8KQmQ0OvZF