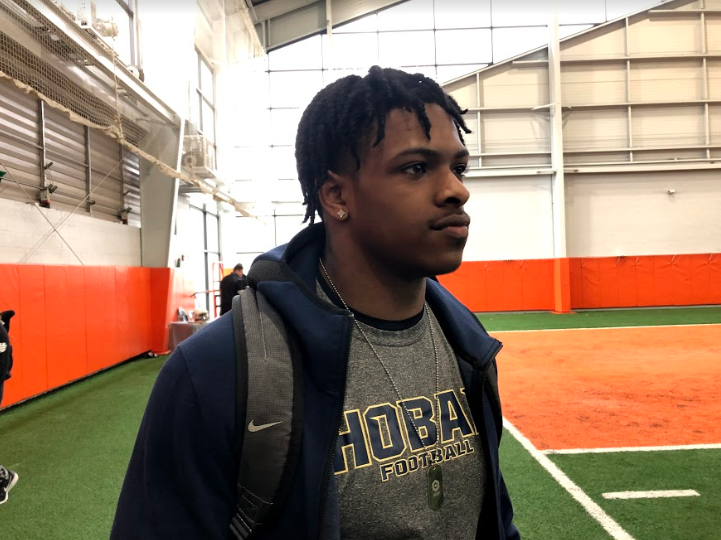 After he ended his performance with the running backs, Trayanum appeared ready for the ride 20-plus miles north to Akron when Student Sports president and football events coordinator Brian Stumpf posed the question.

With the quarterbacks, wide receivers and defensive backs slated to finish the camp, Stumpf suggested that Trayanum stick around for extra work on defense.

“I came in not knowing,” Trayanum said. “Brian asked me, ‘Running back the only thing you got circled?’ I was like, ‘Hey, let’s get some DB work in.’ I’ve showcased both on my film, (but) I just wanted to come out here and compete with the guys.”

Trayanum accepted the challenge and stood out with the defensive backs, putting an exclamation mark on the day after he earned running back MVP and punched his ticket to The Opening Finals at The Star in Frisco, Texas, from June 30-July 3.

“I think, honestly, just my size and the abilities I have to do it at my size is just phenomenal and just stands out,” said Trayanum, who is a four-star recruit and the No. 343 overall prospect for 2020 in the 247Sports composite. “I think that’s what (separates) me out from all the other players.”

Regardless of position, Trayanum already looks like a college athlete.

Up 15 pounds from his junior season at Archbishop Hoban, where he led the Knights to a 15-0 record and Ohio’s Division II state championship Nov. 29 in a 42-28 win over Massillon Washington, Trayanum shouldered the load with ease.

The 6-0, 220-pounder’s versatility ranges from running back to cornerback and strong safety with Ohio State as a frontrunner among the 16 offers he has reported.

“DB comes natural,” said Trayanum, who is being recruited for offense and defense at the next level. “I play strong safety and corner during the regular season, and I played corner the whole game in the championship game. It’s pretty fun out there.”

Then on the verge of his second year as offensive coordinator and quarterbacks coach, Day has since been promoted to head coach, replacing Urban Meyer after seven years at the helm from 2012-18.

The transition in recruiting has had its ups and downs on the trail, where OSU has gained and lost commitments for the classes of 2019 and 2020 since Meyer’s announcement Dec. 4 and Day’s elevation Jan. 2, but the move kept Trayanum’s process seamless.

“It honestly has (been smooth) because I’ve known him,” Trayanum said of Day. “He’s the one that gave Coach G the word that I had the offer. It was a great relationship with him at the start. The was the first real relationship I built with a coach at Ohio State and next was (running backs coach Tony) Alford.”

Trayanum took a return trip down to Columbus for Ohio State’s 11th practice of spring camp March 19, a “relationship building” visit in which he touched base with Day and his new coaching staff.

“Honestly, it was just relationship building,” Trayanum said. “Every time I go down there, more and more, it feels like home. I just love the guys down there.”

“I just keep close contact with Coach Washington because he’s the recruiting coach for the area,” Trayanum said of Washington, who is from Ohio. “He’s a down-to-heart guy. He tells you (how it is), shortcuts nothing. But other than that, he’s a great guy and just seeing him at Michigan, the vibes he gave off there and the vibes he gives off at Ohio State is just amazing — never changed.”

While the Buckeyes’ spring game April 13 is 10 days away, Trayanum sorts through his five available official visits before he settles on short-term plans.

After the OSU visit March 19, Trayanum took in Notre Dame for the first time March 30 and is slated to follow Wednesday with Penn State while nailing down dates for Wisconsin and U-M next.

“Awesome visit,” Trayanum said of his first trip to South Bend, Ind., where he connected with head coach Brian Kelly and running backs coach Lance Taylor before watching the team’s eighth practice of spring camp. “First time ever being there, I really got to truly experience what Notre Dame brings to the table and what type of guys they have — all close-knit, like-minded — while getting the best education.”

Fifteen months since Ohio State offered him, Trayanum has the Badgers and Buckeyes atop his current favorites while the Fighting Irish, Nittany Lions and Wolverines battle close behind.

While he originally wanted to make a decision on a commitment before the summer, Trayanum’s process continues with coaches — offensive and defensive — from all schools in his ear.