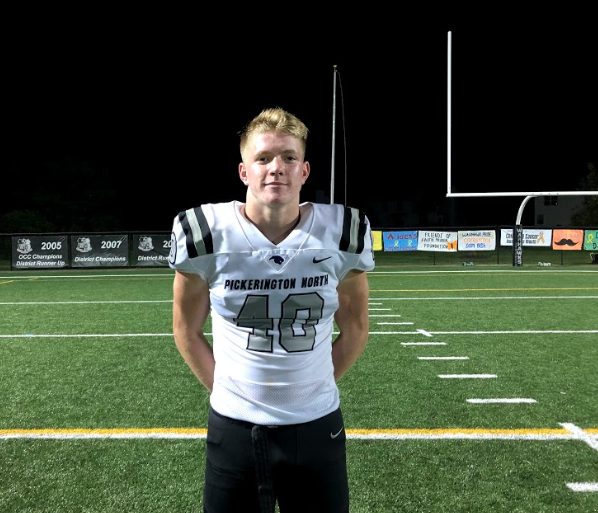 Super Bowl Sunday started with an Ohio State commitment in the afternoon when the Buckeyes added Jack Sawyer to the 2021 recruiting class.

The 6-5, 219-pound defensive end from Pickerington (Ohio) North took to Twitter when he announced his decision to stay home at OSU.

“First, I want to thank all of my family and friends who have pushed me my whole life and made me the person I am today,” a note posted to Sawyer’s tweet read. “Second, I want to thank every single coach and university that has taken their time to recruit me, I appreciate everything you guys have done. I also want to give a big thanks to every coach I have had along the way that has helped me get to this point in my career. This whole recruiting process has been a great experience and I’ve met some amazing people along the way. With that being said, I’ve talked with my family and decided I have to do what’s best for me and my future. That’s why I’ll be committing to THE Ohio State University!! Big thank you to Coach Day and Coach Johnson for giving my this opportunity, I’m ready to be a Buckeye!!”

COMMITTED! So excited to be a Buckeye! #GoBucks #BuckeyeNation pic.twitter.com/s48Y0zSrVj

“Coach Johnson, me and him really get along well,” Sawyer told BSB in September. “I like his techniques. I like his coaching styles. He’s obviously one of the best in the country at what he does, too, so me and him have a good connection.”

Sawyer starts the Buckeyes’ 2021 group with a bang as he wraps up his recruitment almost two years before the early signing period arrives in December 2020. The four-star Sawyer is 247Sports’ No. 3 overall prospect, No. 1 strong side defensive end and No. 1 player in Ohio for 2021.

As a sophomore, Sawyer led Pickerington North to a 6-4 overall record in 2018. Across 10 games, his six sacks paced the Panthers, and he added 62 tackles with 15 for losses.

“Here, we’ve obviously had some really special kids,” Pickerington North head coach Nate Hillerich told BSB in September. “But what’s a little different about (Sawyer) is his toughness, his work ethic and attitude. You find so many times that kids — the four-star, the five-star kids — they don’t work as hard in the offseason. They don’t play every play hard. They take plays off. He’s one of them kids that he doesn’t do that. He’s just a special player. He’s a motor. He has all of those things that are going to make him special at the next level.”

Sawyer took multiple trips to campus throughout Ohio State’s 2018 season. He came to Columbus for the Buckeyes’ games against Tulane (Sept. 22), Minnesota (Oct. 13) and Michigan (Nov. 24).

Pickerington (Ohio) North 2021 defensive end Jack Sawyer is back at Ohio Stadium for the second time since Sept. 22 vs. Tulane, on hand once again for the Ohio State-Minnesota game. pic.twitter.com/WuXt1QGShS