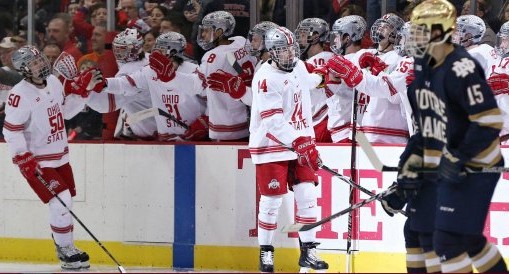 Separation Saturday was a success for the No. 4 Ohio State Buckeyes as they completed the sweep of No. 11 Notre Dame with a 2-0 victory at Value City Arena to put distance between themselves and second place in the Big Ten.

By winning their fifth straight game the Buckeyes (17-5-4, 10-3-3-2 Big Ten) opened an eight-point lead over Minnesota with eight games remaining in the regular season.  OSU (35 points) has two games in hand on the Golden Gophers (27).

Notre Dame could have maintained second and moved to within four points of the Buckeyes after losing the series opener 4-2 on Friday.

The Buckeyes’ advantage over the league is solid but with each game worth three points, by no means is it a given that OSU will earn the No. 1 seed and a first-round bye in the conference tournament.

The Buckeyes and Fighting Irish always play tight games and the two in Columbus were no exception. In the first game, OSU broke a 2-all tie in third period and added an empty-netter with one second left.

In the rematch, junior defenseman Matt Miller gave OSU the lead 53 seconds into the second period, junior Carson Meyer extended the margin at 15:16 of the third and sophomore Tommy Nappier (30 saves) recorded his fourth shutout of the season.

“It’s always good to have an insurance goal but I’m confident we would have won without it because with (Nappier) playing, everybody is pretty confident playing in front of him,” Meyer said.

“Every night you go out there and try to give up no goals,” he said. “My team helped me tonight, keeping them to the outside.”

He has a career mark of 14-1-2 with his loss a 2-1 defeat at Notre Dame on Nov. 3. Combined with senior Sean Romeo’s three shutouts, the Buckeyes have tied the program’s single-season record set in 1997-98 when the Buckeyes reached their first Frozen Four.

Miller gave Nappier the only goal he would need when he scored his third of the season with a blistering shot from the point. The goal was originally credited to sophomore Austin Pooley because it appeared to deflect off his skate in front, but the scoring was changed.

Notre Dame thought it tied the score at the 7:29 mark of the second but the score was taken off the board when it was ruled after video review that there was goaltender interference.

Meyer netted his seventh goal off a faceoff win by senior John Wiitala. Senior Dakota joshua jumped in the circle and nudged the puck over to Meyer for the one-timer to the top shelf over Cale Morris (22 saves) to the delight of 7,994 fans.

“It happened pretty fast,” Meyer said. “It just popped to my stick and I just tried to get it on net as fast as I could because I figured the goalie wouldn’t be ready for that and I was right.”

Notre Dame had nine shots in final period and pulled Morris for an extra attacker with 2:53 left in the game but Nappier didn’t yield as the Buckeyes improved to 8-1-1 since Dec. 28.

“I thought we played hard and executed the game plan fairly well,” Notre Dame coach Jeff Jackson said. “They’re a hard team to play against, have good goaltending and we just couldn’t find a way to score. That was the difference yesterday and today, they found a way to score at key times of the game.”

The Buckeyes return home to play Minnesota on Feb. 15-16 with each game at 6 p.m.