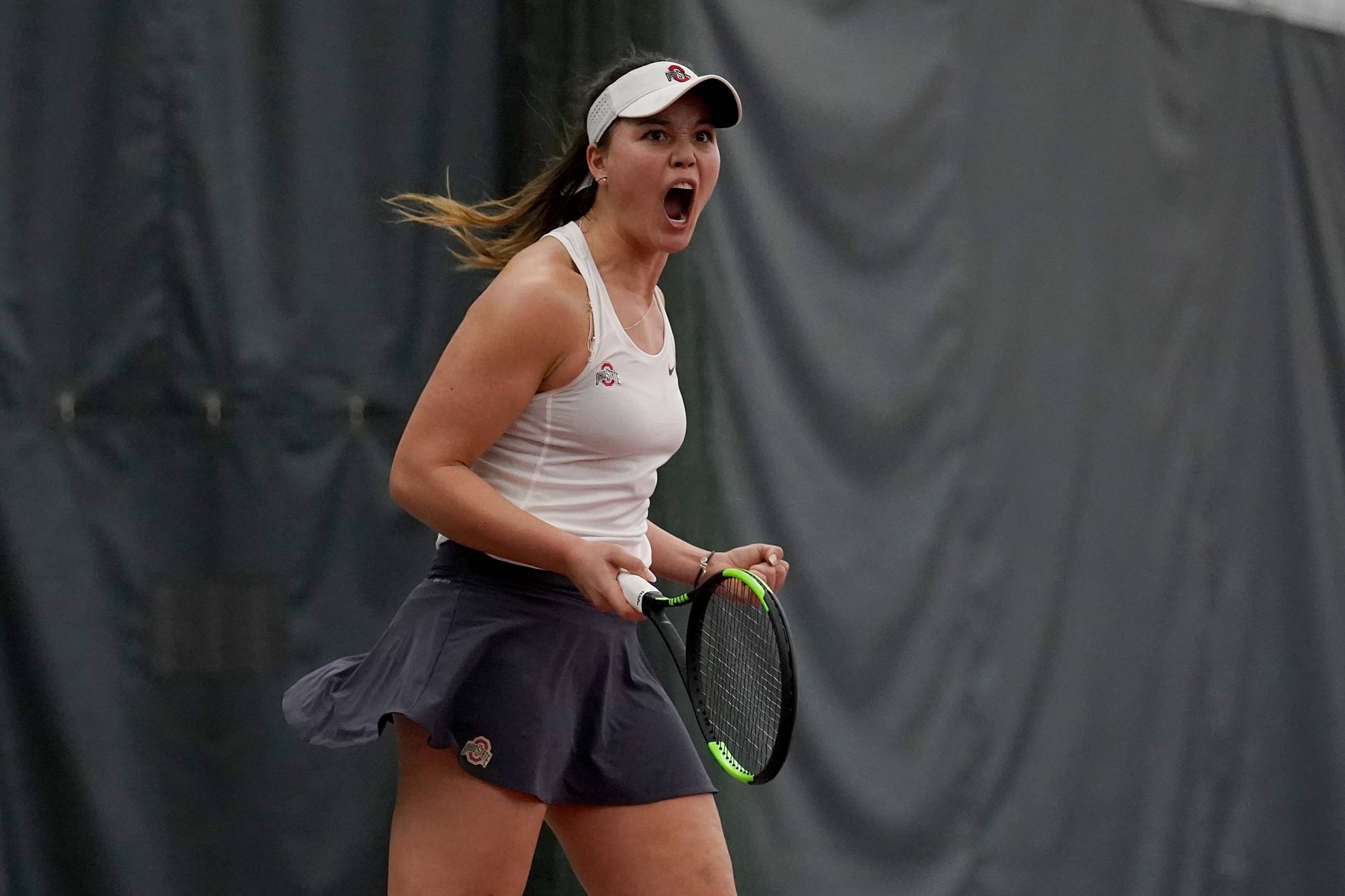 It was a busy week for some of Ohio State’s most prolific athletes. A couple of Buckeye teams bounced back from losing skids with big victories, including the men’s volleyball team. And a few Ohio State student-athletes set new records, specifically the track and field athletes. What follows are brief recaps of what transpired in Ohio State’s Olympic sports with links to the press releases.

The No. 2 Ohio State wrestling team won six of 10 bouts, taking down No. 12 Illinois, 23-14, on the road. Two matches featured nationally ranked wrestlers facing off, and the Buckeyes won them both. No. 1 Myles Martin took care of business against an opponent who had beaten him before in No. 4 Emory Parker, 8-4. And No. 7 Ke-Shawn Hayes defeated No. 8 Eric Barone, 3-1, winning on a buzzer-beater takedown and avenging his loss to Barone at the Cliff-Keen Invitational.

The No. 2 Ohio State wrestling team once again won six of 10, with a 27-15 win at No. 9 Northwestern. The Buckeyes trailed 11-9, but returned from the locker room to roll off four-straight wins and secure the victory.

The No. 9 Ohio State  women’s ice hockey team got back on track with a 4-0 win against St. Cloud State at the Herb Brooks National Hockey Center.

The No. 2 Ohio State men’s tennis team matched up with its first ranked opponent of the season in front of a large crowd at home. The Buckeyes gave the home crowd something to cheer for, dominating No. 9 Stanford, 6-1.

The No. 16 Ohio State women’s tennis team lost its first match of the season, falling 4-3 to No. 6 Texas at home.

The women’s tennis team bounced back to defeat Notre Dame, 6-1, at home. The Buckeyes improved to 3-1 on the season, while formerly undefeated Notre Dame falls to 3-1.

The men’s volleyball team bounced back from its uncharacteristic losing skid with a win against Lincoln Memorial. In what was a tightly contested match, the Buckeyes were able to edge out the Railsplitters in four frames (25-23, 25-19, 23-25, 25-23).

The Ohio State men’s and women’s track teams traveled to Kentucky for the Rod McCravy Memorial and came back to Columbus with 15 gold medals.

The men’s team won eight events, including Luke Landis’ victories in the mile run and the 3000-meter run. DaJuan Seward set a new personal record in the long jump, taking third with a 7.35-meter leap.

The No. 13 Ohio State men’s swimming and diving team and the No. 15 women’s team both claimed victories against Pittsburgh at McCorkle Aquatic Pavilion. The men’s team won by a score of 193-107, while the women’s team defeated the Panthers 199.5-96.5.

The No. 15 Ohio State men’s lacrosse team opened its season with a 12-9 victory against Cleveland State in a home sellout at the Woody Hayes Athletic Center. Jack Jasinski and Tre McLaire scored three goals apiece and Josh Kirson tallied 16 saves to lead the Buckeyes over the Vikings.

The No. 8 Ohio State men’s gymnastics team lost to No. 4 Michigan, 413.900-402.700. The Buckeyes lost despite notching a season-high in scoring. Alec Yoder dominated the pommel horse, notching a 14.900, which is the second-highest score recorded nationally this season.

The Ohio State fencing team came away from the Northwestern Duals with a 12-8 record. Both the men’s and women’s teams went 4-1 to start the competition and then 2-3 on the second day.