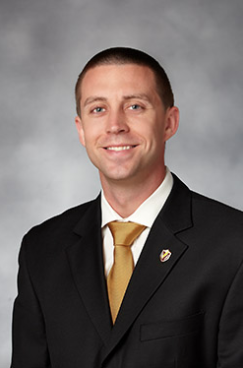 Jake Diebler was announced to the Ohio State coaching staff as an assistant to head coach Chris Holtmann on April 22.

Diebler, who was most recently an assistant at Vanderbilt, replaces Mike Schrage, who was named head coach at Elon University.

“We are excited about the addition of Jake Diebler to our staff,” Holtmann said. “Jake was highly recommended by those he has worked for as well as by many of our former players who are now playing professionally. I appreciated several of them reaching out to recommend him during this process.

“Jake has shown the ability to recruit at a high level, teach and develop players and his work ethic is highly regarded. His Ohio roots and ties also were important in this process. The Diebler name certainly brings back great memories and I know Jake will work extremely hard to create more in the future.”

Diebler returns to Columbus after spending the past three seasons on the Vanderbilt coaching staff as an assistant coach. Prior to his stint at Vandy, Diebler spent three years as the video coordinator at Ohio State. Before that, he coached as an assistant on Bryce Drew’s staff at Valparaiso, where he helped the Crusaders win Horizon League regular-season titles in 2012 and 2013.

“I couldn’t be more excited to join Coach Holtmann and his staff at the Ohio State University,” Diebler said. “I have admired this staff’s work over the last few years and have grown to know them to be one of the best in the country.”

Diebler, an Upper Sandusky, Ohio, native, said having a personal relationship with the Ohio State men’s basketball program is meaningful, with his brother Jon starring for the Buckeyes from 2008-11.

“Our family has roots that run deep in Ohio and at Ohio State, which makes this mean that much more to us,” Diebler said. “It’s truly a blessing to be a part of such a prestigious university and athletics community, and I can’t wait to get started.”

While on the Ohio State staff, Diebler helped the Buckeyes advance to two NCAA Tournaments. Diebler, a former point guard himself, helped mentor Aaron Craft, the 2014 National Defensive Player of the Year, and D’Angelo Russell, a 2015 First-Team All-American.

As a player at Valparaiso, Diebler was known for his work ethic and how hard he played at both ends of the court. A model of consistency, he set a Valpo Division I record by starting every one of the Crusaders’ 98 games across the final three seasons of his career. Diebler also had a string of 278-consecutive minutes played, spanning seven games in the final half of his senior season, another school record.

Diebler had an excellent career at Valpo, finishing No. 10 in school history with 130 career steals and No. 16 with 229 career assists. He also holds the all-time Ohio high school career records in assists and steals.