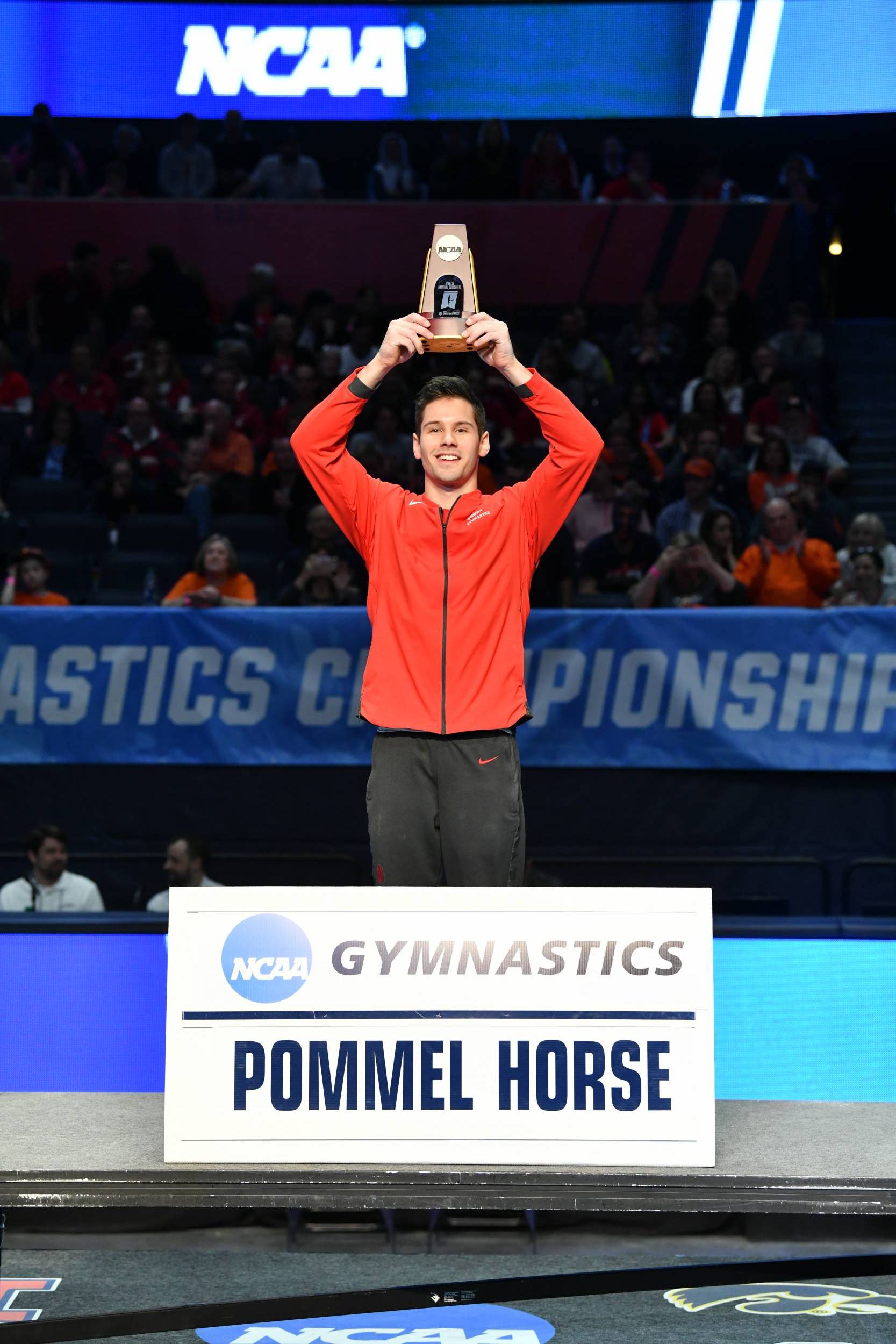 With the end of the spring semester drawing near, Ohio State student-athletes gear up for the end of their respective seasons. An Ohio State gymnast struck gold at the NCAA Championships, while the Ohio State men’s tennis team continued its dominance over the Big Ten. The Ohio State women’s golf team stepped up its play with the conference title on the line, while the men’s team won another tournament as a team, with a senior winning his first individual tourney. The baseball and softball teams impressed again in April, with the baseball team going 3-1 on the week, and the softball team outscoring Michigan State, 29-9, in a three-game sweep. Men’s lacrosse lost an overtime match to a highly ranked conference foe, while the women’s team won in dramatic fashion at Rutgers. Many individuals stood out for their respective teams, including a women’s track student-athlete who bested her school record. What follows are recaps from the Olympic-sport events in the past week for Ohio State athletics, with links to the press releases.

In his final collegiate competition, senior Alec Yoder won the 2019 NCAA pommel horse national championship, and claimed All-American honors on the parallel bars at the NCAA Championships at the State Farm Center in Champaign, Ill., on April 20.

“I am very proud of Alec and everything that he accomplished in these four years,” Ohio State head coach Rustam Sharipov said. “This was a great day for him, and for our program. To win a national championship, and earn another All-American honor, it speaks to the impact he’s had on this team over his four years.”

The No. 1 Buckeyes (26-2, 11-0 Big Ten) clinched their 14th-consecutive Big Ten regular-season title with a 7-0 win against Indiana on April 21. The victory against the Hoosiers improved Ohio State’s record to 44-0 in the Big Ten across the past four seasons. The Scarlet and Gray won the doubles point on senior day, finishing the season 27-1 in doubles play.

The Big Ten Tournament awaits the No. 1 Buckeyes in Ann Arbor, Mich. April 26-28. Ohio State will attempt to repeat as champions, having won the tourney in Iowa City, Iowa, in 2018.

“This would be one of the most unlikely championships,” Ohio State director of golf Therese Hession said. “I knew in my heart we had it in us but we had to put it all together. It’s ironic how the week worked with Jack (Nicklaus) coming in and talking to the team about how to win before we came out and did this over the weekend. We stuck to the game plan and minimized our mistakes. I’m so proud of this team.”

Senior Daniel Wetterich led the Ohio State men’s golf team to its 24th Robert Kepler Intercollegiate championship and won his first tournament title after a tremendous seven-under, 64, in the final round. The Buckeyes took the crown with a six-under final round to finish five-over and four strokes ahead of second place.

The Buckeyes split a doubleheader against Maryland at Bob “Turtle” Smith Stadium on April 20. The Terrapins scored 14 runs on 20 hits in an offensive explosion, defeating the Buckeyes, 14-7, in game one of the doubleheader. Ohio State led 6-3 after a five-run fourth inning, but Maryland bounced back with three runs in the bottom of the fourth, two in the fifth, one in the sixth and five in the seventh. Freshman shortstop Zach Dezenzo went 3 for 5 and smashed two homers with three RBI. Freshman third baseman Nick Erwin added three hits with two doubles. Senior left fielder Brady Cherry went 3 for 5 with one double and two RBI.

The Scarlet and Gray rallied from behind to win, 10-9, in 11 innings in game two against Maryland. Redshirt sophomore catcher Brent Todys led the Buckeyes at the dish, hitting 4 for 6 with a pair of home runs, including the go-ahead homer in the top of the 11th, and four RBI. Magno struck out a career-high 11 batters in four innings of relief, and improved to 3-3 on the year. Canzone went 3 for 6 with one homer, one double and two RBI. Cherry homered and doubled and Dezenzo added two hits with one double and two RBI.

Senior right-handed pitcher Morgan Ray struck out a career-high 13 batters and the Ohio State softball team erupted for 16 hits, overcoming a five-run deficit to defeat Michigan State, 15-6, in six innings at Secchia Stadium in the series opener on April 19.

Senior utility player Emily Clark delivered for the Buckeyes with a two-run triple in the sixth inning, propelled them to a 3-2 victory against Michigan State on April 20.

The Ohio State softball team launched four home runs in its 11-1 walloping of Michigan State in five innings, sweeping the series at Secchia Stadium on April 21. The Buckeyes improved to 29-14 on the season and 12-5 in the Big Ten, while the Spartans fell to 15-28 overall and 3-12 in conference play.

The Ohio State track team competed in the 2019 Virginia Challenge, an unscored meet. The women’s squad won nine medals and the men’s team took six. The Buckeyes continued to show progress, with 22 student-athletes setting personal bests. Senior Julia Rizk set a new school record, besting her previous time of 4:18.25 with a 4:15.88 in the 1,500-meter run.

The Ohio State women’s lacrosse team scored four unanswered goals in the final six minutes to defeat Rutgers, 11-7, at HighPoint.com Stadium on April 20. The Buckeyes improved to 9-7 overall and 1-4 in conference action, while Rutgers dropped to 5-10, 0-5 Big Ten.

The No. 7 Ohio State men’s lacrosse team battled No. 2 Maryland into overtime before the Terrapins slipped by the Buckeyes, 10-9, at Ohio Stadium on April 20. The game was played in front of 3,324 fans, which was a non-Spring Game record for Ohio State. The Buckeyes dropped to 8-3 on the season (1-3 Big Ten), while Maryland improved to 11-2 (3-1 Big Ten).

The No. 6 Ohio State rowing team finished 1-3 in races at the LLV Women’s Collegiate Challenge against No. 5 Michigan and No. 1 Washington on April 20. The Second Varsity Four came in first place for the Scarlet and Gray, improving to 2-4 in races and 5-4 overall on the season.

The Buckeye Second Varsity Four raced Washington in the first race of the day, and Olivia Kwiecinski, Ally Hatton, Mo Robinson, Kailey Boomer and Kelly Stainbrook raced the boat to a first-place finish for Ohio State at 7:20.60.

“We didn’t have a good day today,” Ohio State head coach Melissa Schaub said. “We just can’t have those kind of starts against a good team at their place. We did our best to try to turn some of those matches and give ourselves a chance, but the hole was just too big. I do think we can learn from this and get better. It doesn’t get any easier tomorrow on the road again against Illinois. We need to have a short memory and get ready to go tomorrow.”