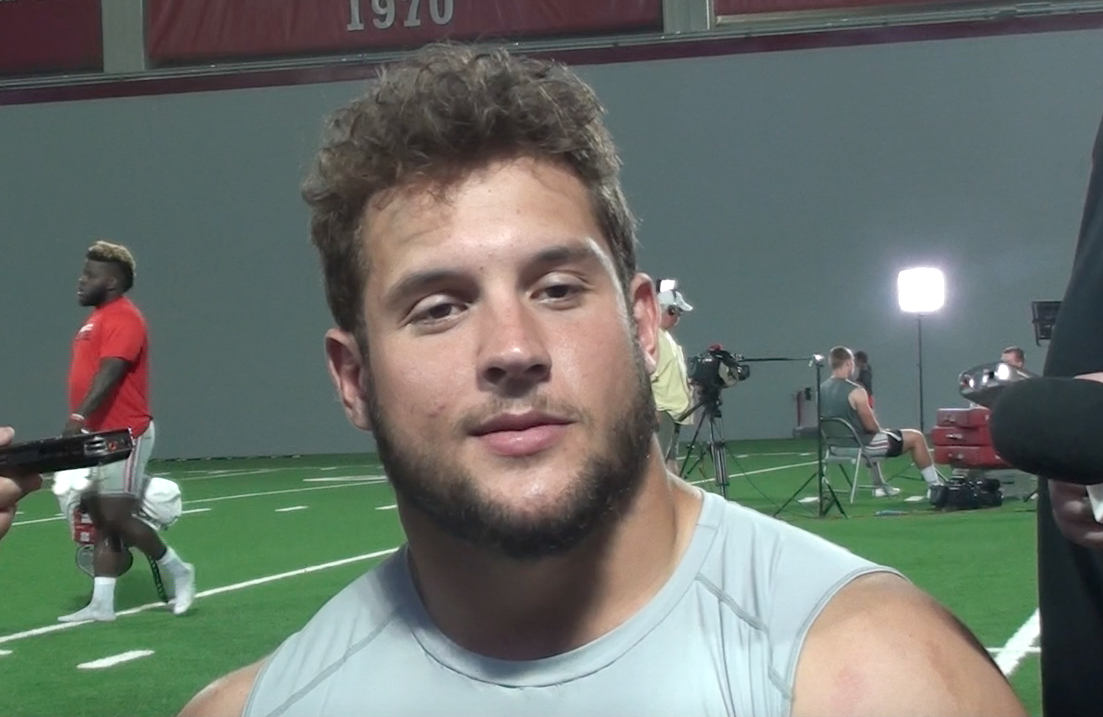 According to Bosa’s parents, John and Cheryl, the Buckeyes are without the defensive lineman until at least November when he gets re-evaluated by his doctor after surgery to repair a core muscle injury. Meyer said OSU expects Nick Bosa back but no decision on the 6-4, 263-pounder’s return will be made until the doctor’s appointment.

First reported by The Athletic’s Ari Wasserman, Nick Bosa’s father, John, clarified the rehabilitation timetable, saying his son had surgery Sept. 20 in Philadelphia. John Bosa said Nick is expected to make a full recovery from the injury but will need to be reassessed in November by core muscle specialist Dr. William Meyers of the Vincera Institute, who performed the procedure.

“Bad news: surgery. Good news: 100 percent fixable,” John Bosa told Dan Hope of Eleven Warriors. “I know Coach Meyer’s going to get 1,000 questions, so I do want to just clarify: Nick will not be getting re-evaluated until November, so anything past that, that would just be guessing.”

Nick Bosa’s mother, Cheryl, added that her son is currently in Philadelphia for rehab after last week’s surgery. She said he would return to Philadelphia in November for the re-evaluation.

“It would be then that we’ll assess his readiness,” Cheryl Bosa told ESPN’s Adam Rittenberg.

The afternoon sentiments from Nick Bosa’s mother and father followed up on Meyer’s morning statements Monday in Columbus, where the head coach said the junior defensive end expressed a desire to return at some point if possible. Nick Bosa is projected to be one of the top picks in the 2019 NFL draft.

“We’ve already had those discussions a little bit,” Meyer said Monday. “But that’s down the road when he becomes healthy again. You can’t ask for a better family and people. I don’t want to paraphrase John and Cheryl Bosa, but as they said, we trust our children to this program. And we will continue to do so. And so those conversations will be had, but absolutely. Not that you treat anybody different than another player. I want to make sure that’s clear. But that’s a real conversation that we’re going to have.”

On multiple occasions through the first few weeks of the season, Nick Bosa has stated his strong desire to win a national championship at Ohio State. Before the Sept. 1 opener against Oregon State, he described the Buckeyes’ team for 2018 as perhaps its most talented squad since 2014.

At the end of the 2014 campaign, OSU claimed the inaugural College Football Playoff title with his older brother, Joey. The elder Bosa starred at Ohio State from 2013-15 before he became the 2016 NFL draft’s No. 3 overall pick upon his first-round selection via the San Diego Chargers.

“My No. 1 goal is to win a national championship,” Nick Bosa said Aug. 28. “However we get there, I know I’m going to be a contributing factor if I’m out there. I’m not dying to get big numbers. I want to make plays and help my team in that way. I feel like I’m definitely a big part of it, but I want to see my other guys ball just as much.

“There’s no reason we shouldn’t win a national championship. Sometimes, I just look behind me at who’s playing on the defense and then I see (sophomore quarterback) Dwayne (Haskins) throwing to our receiving core and (running backs) Mike (Weber) and J.K. (Dobbins) in the backfield and our O-line that I face everyday and know is so much better than the ones I face (in the games). It’s just like, ‘I don’t know why we shouldn’t be playing for one.'”