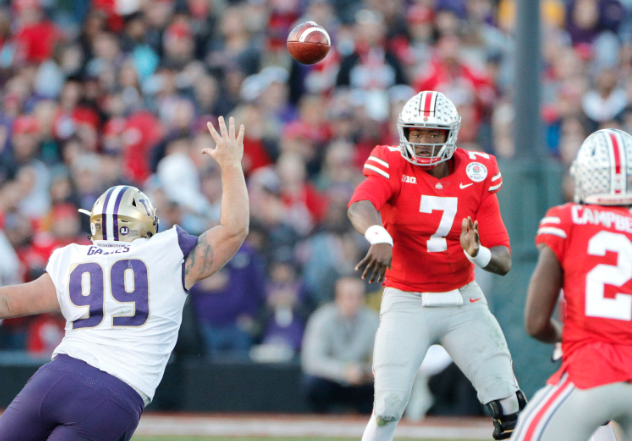 After we featured former Ohio State great J.T. Barrett in our last Interview Issue, we began an online series titled J.T. Barrett Discusses Ohio State Quarterbacks, where he gives his take on the signal callers he played with in Columbus.

We already published Barrett’s take on Kenny Guiton, Braxton Miller and Cardale Jones, and the series continues with his perspective on record-setting Buckeye gunslinger Dwayne Haskins.

Barrett and Haskins spent the 2016 and 2017 seasons together in the Ohio State quarterbacks room, first with Tim Beck and then Ryan Day, who both served as co-offensive coordinators as well.

In 2017, Barrett broke the Ohio State single-season record for touchdowns responsible for with 47, including a then-program record 35 touchdown passes. In the final game of the regular season, Haskins filled in for an injured Barrett and completed 6 of 7 passes for 94 yards and rushed three times for 24 yards in a comeback Ohio State victory.

Haskins took over the reigns of Day’s offense after Barrett went to the NFL and broke his predecessor’s records in his first and only season as the Buckeyes’ starting quarterback in 2018. Haskins completed 70 percent of his passes for 4,831 yards and 54 touchdowns responsible for, including 50 passing scores, which all marked Big Ten records.

The immense success of Haskins took the nation by surprise, but Barrett knew his successor had what it takes to be the next great Buckeye passer.

“If you would look up a training video on how to throw the ball, Dwayne could be on the cover of it from a mechanics standpoint,” Barrett told Buckeye Sports Bulletin of Haskins. “He’s fortunate to have those skills. If you were looking up videos on YouTube of how to throw the football, Dwayne would be the person you would see. He’s incredibly accurate.”

Barrett continued to praise his former teammate, emphasizing how he feels Haskins’ mobility is underrated and his arm is exceptional.

“People think he’s just a pocket passer, which is fair, but Dwayne can move still,” Barrett said of Haskins. “He’s not the fastest, but he’s able to make somebody miss in the pocket and be able still set his feet and throw the football. He’s still able to move and make plays on the run. He’s a technician as far as throwing the football.”

Haskins was drafted by the Washington Redskins with the No. 15 pick in the 2019 NFL Draft, but his transition to the pros was tough. Despite sitting behind Case Keenum and then Colt McCoy early in the season, Haskins was named the Redskins starting quarterback for the remainder of the season on Nov. 11.

Haskins finished his first NFL season with 1,365 passing yards and seven touchdowns to seven interceptions while completing 58.6 percent of his passes in nine games, including seven starts. He added 101 rushing yards on 20 carries (5.1 yards per carry) and the woeful Redskins managed two wins in his seven starts.

The next installment of J.T. Barrett Discusses Ohio State Quarterbacks will feature former Ohio State quarterback Tate Martell, who transferred to Miami (FL) in the spring.