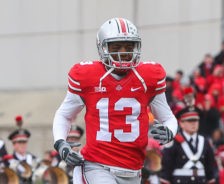 Former Ohio State quarterback Kenny Guiton first made a name for himself in Scarlet and Gray history in the eighth game of the 2012 season.

Starting quarterback Braxton Miller went down with an injury and Guiton entered, trailing Purdue 20-14 late in the third quarter.

Down 22-14 with less than a minute remaining, Guiton lead the Buckeye offense on a 61-yard drive, capped off with a touchdown pass to Chris Fields and a game-tying two-point conversion pass to Jeff Heuerman.

In the second game of the 2013 season against San Diego State, Guiton filled in for an injured Braxton Miller again. Guiton finished the game and started the next two games for Ohio State, winning all three games.

In his second start, Guiton set an Ohio State record with six touchdown passes in the first half against Florida A&M.

Former teammate and fellow Ohio State signal caller J.T. Barrett had high praise when reflecting back on his former teammate during an interview with Buckeye Sports Bulletin.

“K.G. was a smart guy,” Barrett told BSB. “I feel like people downplayed his arm, saying he didn’t have a strong arm, this and that. But at the end of the day, I remember my true freshman year, I was redshirting, and the span he had when Braxton went down — he was playing amazing.

“He could have gone anywhere else and been the starter, but he’s at Ohio State. He won those games that year, and he also won a game when Braxton got hurt the year before in 2012.

“So at the end of the day, he was going to be able to march the troops down the field and put a score up. He was a person you could count on and was ready to command our offense.”

BSB will continue to publish pieces from the interviews of Bob Hunter and J.T. Barrett that could not fit in the Interview Issue, so stay tuned to BuckeyeSports.com throughout the summer.