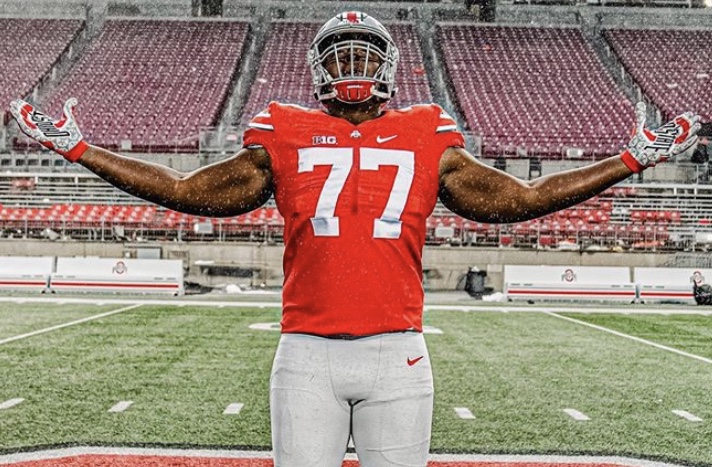 Ohio State landed its second commitment in as many days when Bellaire (Texas) Episcopal four-star offensive tackle Donovan Jackson pledged his services to the Buckeyes on Wednesday evening.

The 6-4, 308-pound Jackson is considered the 11th-best offensive tackle and No. 57 prospect overall in the class of 2021, as he was named the offensive line MVP at The Opening last summer and then led the Knights to the 4A state title in the fall. He picked Ohio State over finalists Georgia, Stanford, Texas and Texas A&M.

Jackson’s relationship with the Buckeyes dates back to middle school, when he attended a one-day camp in Columbus as an eighth-grader. He landed an offer from offensive line coach Greg Studrawa just a few months later could, which was his first from a Power 5 school. But his affinity for the program goes back much further.

Jackson’s parents are originally from Ohio and his grandmother still lives in Cincinnati. He grew up rooting for Ohio State despite growing up 1,000 miles away in Texas, and he called his unofficial visit for the sprint game last April a “dream come true” as a result.

That said, the Aggies were long considered the favorite in Jackson’s recruitment thanks to their proximity from home. But the Buckeyes turned the tables during his unofficial visit for the 28-17 win over Penn State on Nov. 23.

“Ohio State is unique because you not only graduate with a great degree, but they provide so much after football,” Jackson told Buckeye Sports Bulletin.