Is Dwayne Haskins Ready For NFL? After Rose Bowl Win, OSU QB Has ‘Blessed Situation’ As Decision On Future Looms 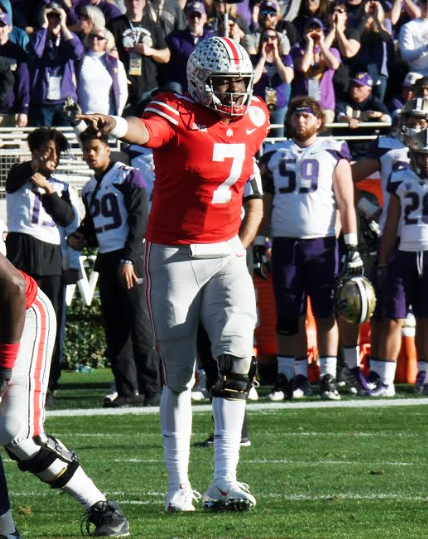 PASADENA, Calif. — After the final pieces of confetti fell to the grass and the on-field celebration finished Tuesday at Rose Bowl Stadium, Dwayne Haskins approached the southwest tunnel to showers of “one more year” chants from fans clad in scarlet and gray as he disappeared into the direction of Ohio State’s locker room.

Was the Buckeyes’ 28-23 Rose Bowl win over Washington the last of Haskins in Columbus? If so, even only after one year as OSU’s starting quarterback, what a ride it has been.

“Buckeye Nation loves me and I love Buckeye Nation since I was 8, 9, 10 years old,” Haskins, who won Rose Bowl offensive player of the game, said in Ohio State’s postgame press conference with outgoing head coach Urban Meyer and fifth-year senior H-back Parris Campbell. “So to receive that ovation from them, to know how much they value me as a player and to know how much work I put into this to be in this spot, just to go to school here, just really blessed. Thankful to the guy to the right (Meyer) for recruiting me. And I really couldn’t ask for more.”

Haskins completed 25 of 37 (67.6 percent) passes for 251 yards and three touchdowns to zero interceptions against the Huskies (10-4) as he lifted the Buckeyes (13-1) to their sixth straight victory. As the sophomore’s 2018 season ends, though, his decision on whether or not to enter the 2019 NFL draft continues to hang over his head.

“Nowhere as far as like gaining any momentum with that,” Haskins said after the game of his future. “I still have a lot of time making the decision, working with my family and teammates and coaches to figure out what’s best for me. But right now I’m excited to get this win. Excited to leave Coach (Meyer) with this victory for myself and the rest of the teammates. It’s a blessed situation right now.”

Haskins ranks 19th overall among draft-eligible prospects, rated by CBS Sports and other outlets as the top quarterback available after Oregon junior Justin Herbert announced Dec. 26 his choice to return to the Ducks for his senior season in 2019. NFL questions have been thrown at Haskins for months, but he never let outside noise alter his performance in any of OSU’s 13 games, passing for 4,831 yards and 50 touchdowns — leading college football in both categories.

“It’s a credit to his mom and dad now, because the average person — I’m not sure they could handle it the way he’s handling it,” Meyer said Sunday at Ohio State media day outside Rose Bowl Stadium. “You can say he’s awful mature. I don’t buy that. I buy that’s a product of two wonderful parents that are very involved in a person’s life and humility and respect, respect for his teammates. The humility, realizes that God gave him great tools, and he’s worked real hard. I credit his mother and father with the way he’s handling it.”

Meyer handed off Ohio State’s football program officially Wednesday to Ryan Day, who takes over as the Buckeyes’ 25th head coach after two years as OSU’s offensive coordinator/quarterbacks coach. Day, who came to Columbus after stints with the Philadelphia Eagles (2015) and San Francisco 49ers (2016) helped develop Haskins into an NFL-potent passer — whether that league leap comes in 2019 or later.

“I do think that he has a chance to be really successful in the NFL,” Day said of Haskins last Saturday at media availability inside the Residence Inn LA Live. “When and how and the situation, obviously, is something that we have to look at after the Rose Bowl. But when you look at what he’s done this season, it’s been very, very impressive.”