Dre’Mont Jones Selected By Denver Broncos With No. 71 Overall Pick In 2019 NFL Draft 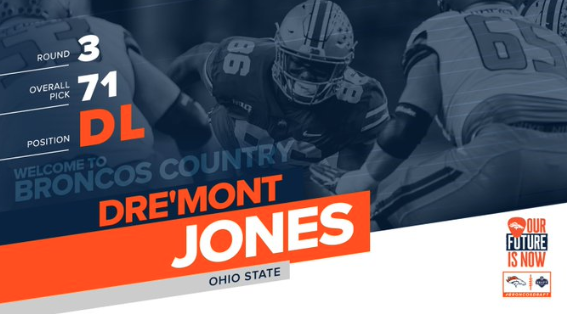 Continuing the Ohio State tradition of defensive linemen in the pros, Dre’Mont Jones was selected by the Denver Broncos with the 71st overall pick when the third round of the 2019 NFL draft resumed Friday from Nashville, Tenn.

After three years at OSU, Jones decided to come back for his fourth-year junior season in 2018 and he leveled up.

Jones tallied 43 tackles (13 for losses), 8 1/2 sacks, an interception returned 28 yards for a touchdown, five quarterback hurries, three fumble recoveries and a forced fumble across all 14 games.

Jones declared Dec. 13 for the NFL draft, as expected for the past year, but he decided to finish his tenure at OSU in the Rose Bowl rather than sit out the team’s Jan. 1 finale.

An in-state product of Cleveland St. Ignatius, Jones signed with the Buckeyes’ 2015 class as a four-star recruit.

Considered the 247Sports composite’s No. 133 overall prospect, No. 10 strongside defensive end and No. 6 player in Ohio, he made his move inside from edge to three-technique and flourished under defensive line coach Larry Johnson.

Jones joins former OSU defensive end Nick Bosa (2016-18), whom the San Francisco 49ers selected Thursday with the second overall pick in the first round of the NFL draft, as the second defensive lineman off the board.