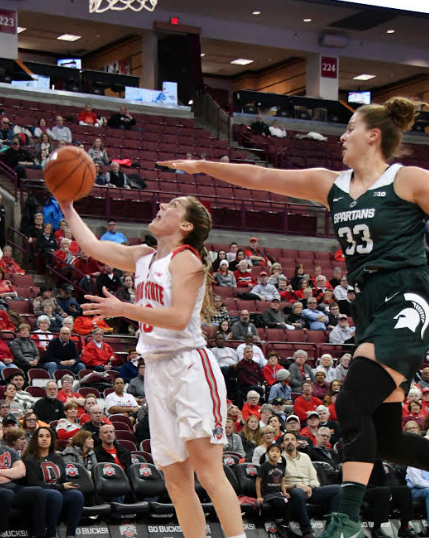 After the Ohio State women’s basketball team knocked off No. 25 Indiana last Thursday and secured its first Big Ten win of the season, the Buckeyes rolled their momentum into Monday against Michigan State when they upended the No. 17 Spartans for a 65-55 triumph before 4,695 at Value City Arena in Columbus.

Graduate guard Carly Santoro, who announced her transfer from Bowling Green in March, compiled a season-high 25 points on 7-of-13 shooting and a 4-for-7 clip from long range to pace the Buckeyes (6-8, 2-3). The freshman duo of forward Dorka Juhasz and guard Janai Crooms added 10 points apiece, and combined for 10 rebounds.

“My teammates just fed me when I was hot and just credit to them,” Santoro said. “They were getting me the ball and they were passing it good, so it was because of them that I had the open looks.”

OSU assorted 13 assists, eight of which came from graduate guard Carmen Grande, who added six points and six rebounds. Ohio State shot 18 of 46 (39.1 percent) from the field and 7 of 16 (43.8 percent) on three-pointers.

“You can see it in the game — we’re always coming out with our pedal down the whole time, and we always just stay together and not give up on each other,” Crooms said.

OSU went up 26-20 at the 4:54 point after Santoro’s make in the paint before Michigan State again stormed back on a 7-3 spurt through the last 2:35 — capped by a layup with eight seconds left from Shay Colley, whose 18 points led the Spartans — as head coach Kevin McGuff’s squad clung to a 29-27 margin at halftime.

“Michigan State’s talented, but they’re also very physical team,” McGuff said. “We talked a lot at halftime about the rebounding. We were giving up a lot of second-chance points in the first half and kind of did a much better job in the second (half).”

“The last couple games, we’ve been just making more winning plays down the stretch,” McGuff said ahead of Thursday’s 7 p.m. ET start at Penn State (9-7, 2-3). “Hopefully, that gives us a lot of confidence because I still think there’s a long way for us to go in terms of where we can go with this team this year, so we’ve just got to keep practicing, competing and getting better.”