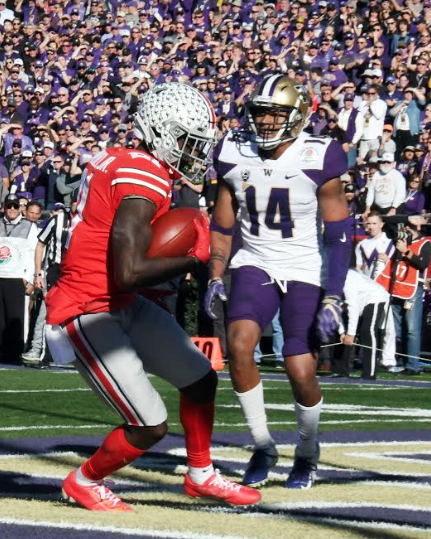 When fifth-year senior Parris Campbell completed his career Jan. 1 in Ohio State’s 28-23 Rose Bowl win over Washington, the progress he made throughout the past five years was abundantly clear.

Campbell capped his historic campaign with 11 receptions (career high) for 71 yards and a 12-yard touchdown against the Huskies, leaving the Buckeyes to train for the NFL draft possessing a record that tells how far he has come. With 90 receptions for 1,063 yards and 12 touchdowns across 14 games in 2018, he surpassed David Boston’s 1998 mark of 85 catches and became OSU’s single-season leader.

An Ohio native, Campbell came to Columbus from Akron, where he attended  St. Vincent-St. Mary. Among other areas, straight-line speed and quick-change agility led to his rating as a four-star athlete — ranked the 247Sports composite’s No. 139 overall prospect, No. 22 wide receiver and No. 4 player in Ohio for the 2014 recruiting class — with versatility projected for slot receiver, running back or even defensive back. As a senior in 2013, Campbell ran for 1,584 yards and 22 touchdowns en route to the Fighting Irish’s 15-0 record and state championship.

“Just coming in from high school, from playing running back my entire career since I’ve played football and then making a switch to receiver when I got to college, it was hard,” Campbell said.

Campbell’s career at Ohio State took time to get off the ground. After he redshirted his freshman year in 2014, he was without a reception or carry throughout his redshirt-freshman season in 2015

“It was rough for me,” Campbell said. “But you know, never gave up, never quit on myself. Even though some people may have — the critics say what they say, I just never gave up myself. I put a lot of time put a lot of work, effort into it.”

On the board as a sophomore in 2016, Campbell appeared across 13 games with 13 receptions for 121 yards (9.3 average) and a long of 16 but zero touchdowns. To start his junior season in 2017, he debuted with six receptions for 136 yards and a 74-yard touchdown Aug. 31 when the Buckeyes beat Indiana 49-21 to open the campaign, battling through an upper-body injury before ending the fall with 40 catches for 584 yards (14.6 average) and three touchdowns over 13 games.

“It blossomed,” Campbell said. “You don’t get anywhere in life without hard work. And I think I’m a testament to that.”

Campbell made strides, but he put off his NFL draft entry for one more year at OSU. With sophomore quarterback Dwayne Haskins dropping back and slinging it, Ohio State’s offense leveled up and Campbell took the next step as a result, boosting his stock as he evolved from a one-dimensional speedster underneath to an all-around threat in the intermediate and downfield passing game.

“I think this particular year was extremely beneficial for me,” Campbell said. “I had that decision to make after the season last year, you know, sit down with my family, talk with coaching staff. And honestly look at myself in the mirror. There were things that I needed to get better at and things I wanted to do and things I wanted to accomplish.