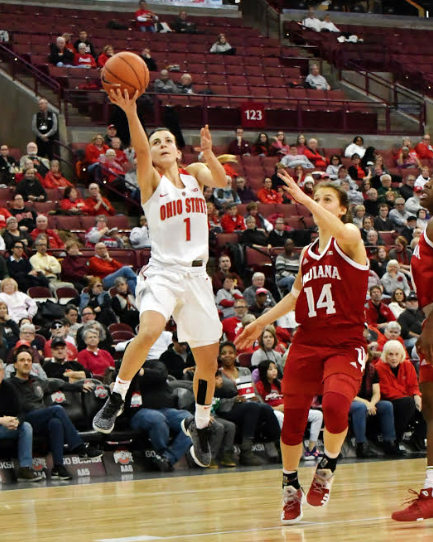 Ohio State came back from 12 points down and retook the lead on several occasions in the fourth quarter, and the third time was the charm.

The Buckeyes battled down the stretch of Thursday’s back-and-forth second half at Value City Arena in Columbus, knocking off the No. 25 Hoosiers 55-50 before 3,557.

“I’m excited to get in the ‘W’ column,” head coach Kevin McGuff said of snapping a five-game losing streak. “So I’m happy for them, I’m really proud of them. We played really hard and competed for 40 minutes.”

Freshman guard Janai Crooms came up big for the Buckeyes with eight of her 12 points in the final 10 minutes. She scored five straight points as OSU (5-8, 1-3) pulled away in the last two minutes.

“I told myself — I was missing in the first half and every time, Carmen and my teammates were telling me, ‘Hey, you’re good, you’re going to make it,'” Crooms said. “So it was just about confidence and telling myself, ‘The next play.’ I think that helped in the fourth quarter and I was just making shots.”

Ohio State started the first quarter down 14-2 until Juhasz’s triple at the buzzer brought the deficit back to single digits.

The Buckeyes came out in the second quarter with four straight points from Grande and junior guard Jensen Caretti, who had six points on 3-of-4 shooting and two rebounds off the bench, creating momentum on an eventual 10-4 run into the 3:18 mark. Indiana (14-2, 3-1) closed the final 3:02 on 6-5 edge to lead 24-20 at halftime, but OSU hung around into the third quarter.

After the teams traded spurts into Grande’s fast-break layup to close the Hoosiers’ advantage to 29-26 at the 6:08 point, Ohio State allowed its visitors to finish the last 5:34 of the frame on a 7-4 margin with Caretti’s jumper at the 1:13 mark shortening the climb to 36-30.

The Buckeyes began the fourth quarter with an 8-0 run, starting on Juhasz’s jumper 17 seconds in and culminating with Grande’s go-ahead layup at the 8:19 point to give OSU its first lead all game.

Both sides traded buckets on ensuing possessions before Ohio State created separation on a 6-0 spurt into the 1:26 mark, building its lead to 51-45 — the largest of the night.

Indiana closed the gap to one point with the Buckeyes up 51-50 and 33 seconds left, but Grande polished off the victory with four straight points to close out the 55-50 final.

“Hopefully, it boosts our confidence,” McGuff said. “We’ve been playing well. We just haven’t been making plays at the end of games. So hopefully that gave us the confidence that we’re going to need to finish out games.”

Jaelynn Penn posted a team-high 12 points for the Hoosiers on 4-of-10 shooting, complemented by Bendu Yeaney’s 10 points and Ali Patberg’s nine points.

OSU looks to build off its first conference win of the winter Monday when No. 23 Michigan State (12-3, 2-2) comes to Value City Arena for a 7 p.m. ET start on Big Ten Network.