C.J. Saunders Steps Up As Unlikely Leader For Ohio State 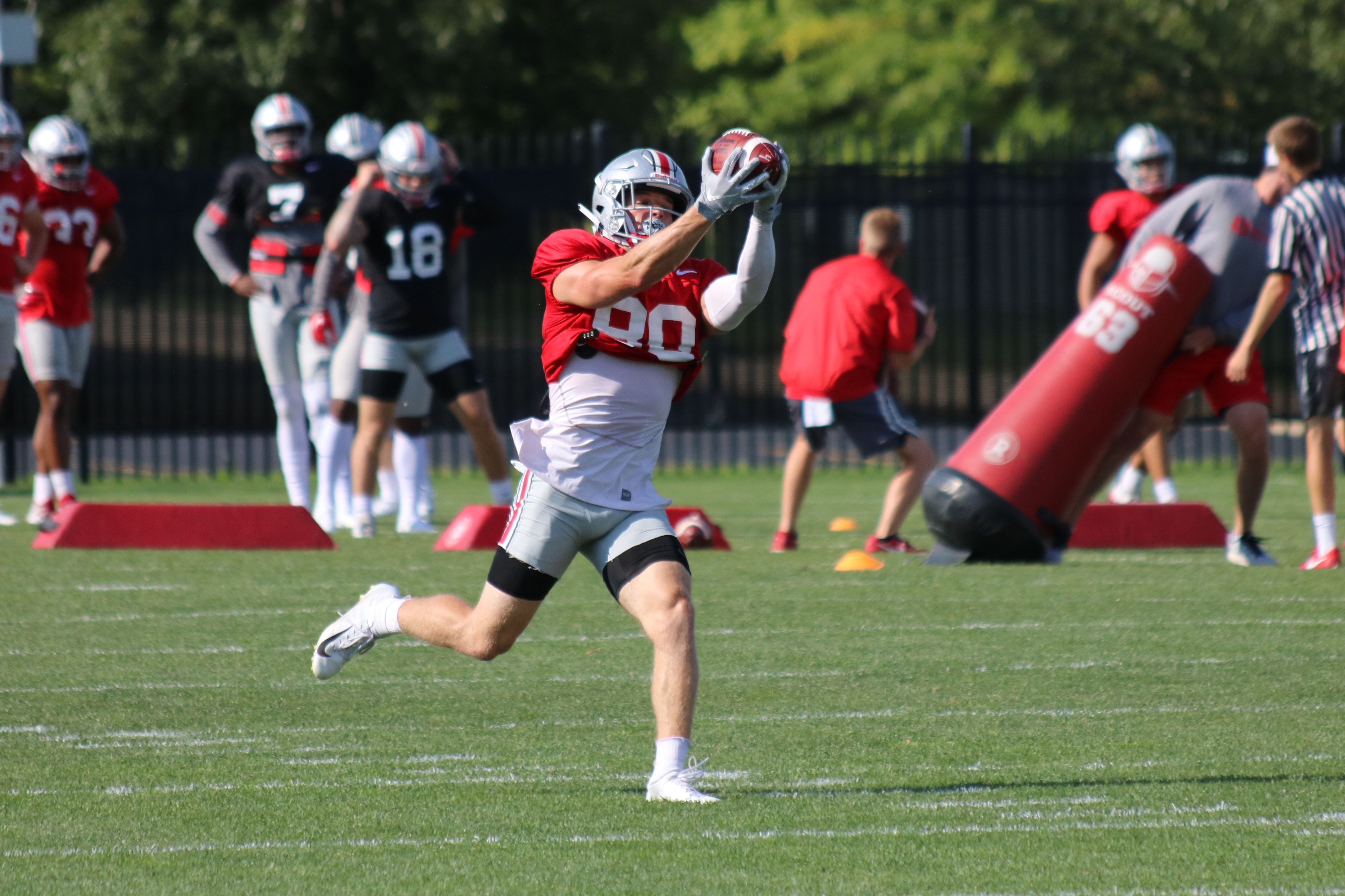 Parris Campbell, Terry McLaurin and Johnnie Dixon moved on to the NFL draft, leaving room for opportunity for the returning Ohio State receivers.

The receiving trio was among the team’s most vocal leaders, with each representing the Scarlet and Gray as a captain a year ago.

Not only must the Buckeyes replace three of their top leaders, but a whole lot of production, too. Campbell, McLaurin and Dixon combined for 167 catches for 2,433 yards and a remarkable 31 touchdowns last season.

Saunders, a fifth-year senior H-back, has not been the most productive Buckeye in his tenure, but should see increased opportunity in Ohio State’s up-tempo offense with so much turnover in the receiver room.

“C.J. Saunders does a phenomenal job,” Ohio State wide receivers coach Brian Hartline said. “He is a guy that I use as an example a lot, whether it be taking tests in our room, whether it be overall effort in our room, he does a great job of just — it’s really hard for me to find a bad clip on film. It’s really hard for me to find lack of effort on a test. And it’s not like I’m trying to put him on a pedestal — I can grab his test and put it on the overhead and be like, ‘All right, let me grab somebody else’s test,’ and then nobody wants to put their test up there.”

The tests administered by Hartline feature questions about the receivers’ roles against certain coverages and a diagram section where the student-athletes draw specific formations and routes.

Saunders sees the tests as a way to show the time he has put into his studies and separate himself within the receiver room.

A three-sport athlete at Dublin (Ohio) Coffman, Saunders originally walked on at Ohio State, but eventually earned a scholarship through his hard work and dedication to the program.

After breaking out for 102 yards and a touchdown on six catches against UNLV as a redshirt sophomore in 2017, Saunders seemed poised to build off that success.

Saunders took a back seat during the Buckeyes’ offensive explosion last season, catching just 10 passes for 73 yards. However, he returned bigger and stronger than ever this spring.

“Another year of weight room and eating and stuff has been able to help me,” Saunders said. “This winter wasn’t quite as hard to get that extra couple pounds. But I’ve been able to feel comfortable in my routes and in my play, being able to be fast still at that extra weight that I’m not used to.”

With some added strength, Saunders (5-10, 190) continues to impress those around him, including Hill, a fellow H-back.

Seemingly everyone around the Ohio State football program has high praise for Saunders, but what is it going to take for him to reach the next level and earn more playing time?

“I think it’s just the whole thing about, ‘How are you going to separate yourself?,’ Saunders said. “And for me, whether just putting everything I know onto a route, it’s more than just saying, ‘OK, run a ‘Go’ ball.’ There’s a lot of things into a ‘Go’ ball, it’s not just that easy, you know? And people that have been around the game know that.

“So writing it down — Coach Hartline’s always said, ‘If you write it down, you have a better shot of actually doing it, you’re more likely to do it when you get in that role’ … So that’s kind of why I do a lot of detail in my routes and what the play looks like because I want to envision it so when I get in that spot I know exactly what to do.”

No matter what Saunders does, whether it’s a test, a route or a rep in the weight room, he does it full go. Hartline sees Saunders strive for greatness everyday, helping establish the expectation for the rest of the receivers.

Despite not enjoying a ton of individual success on the field, Saunders is a leader of the Ohio State football team. Although he might not be the most conventional leader as a former walk on, the Dublin native does his part to improve the team — as always, full go.

“I take pride in definitely being able to be a leader and be relied upon,” Saunders said. “Kind of said it earlier with Coach Hartline — his thing is there’s so much more than just production. And I haven’t had on Saturdays the most production out of the room, but that doesn’t mean I can’t influence guys and lead them in the right direction and teach them stuff that I know that helps me be a better receiver. So I definitely take a role in leadership.”