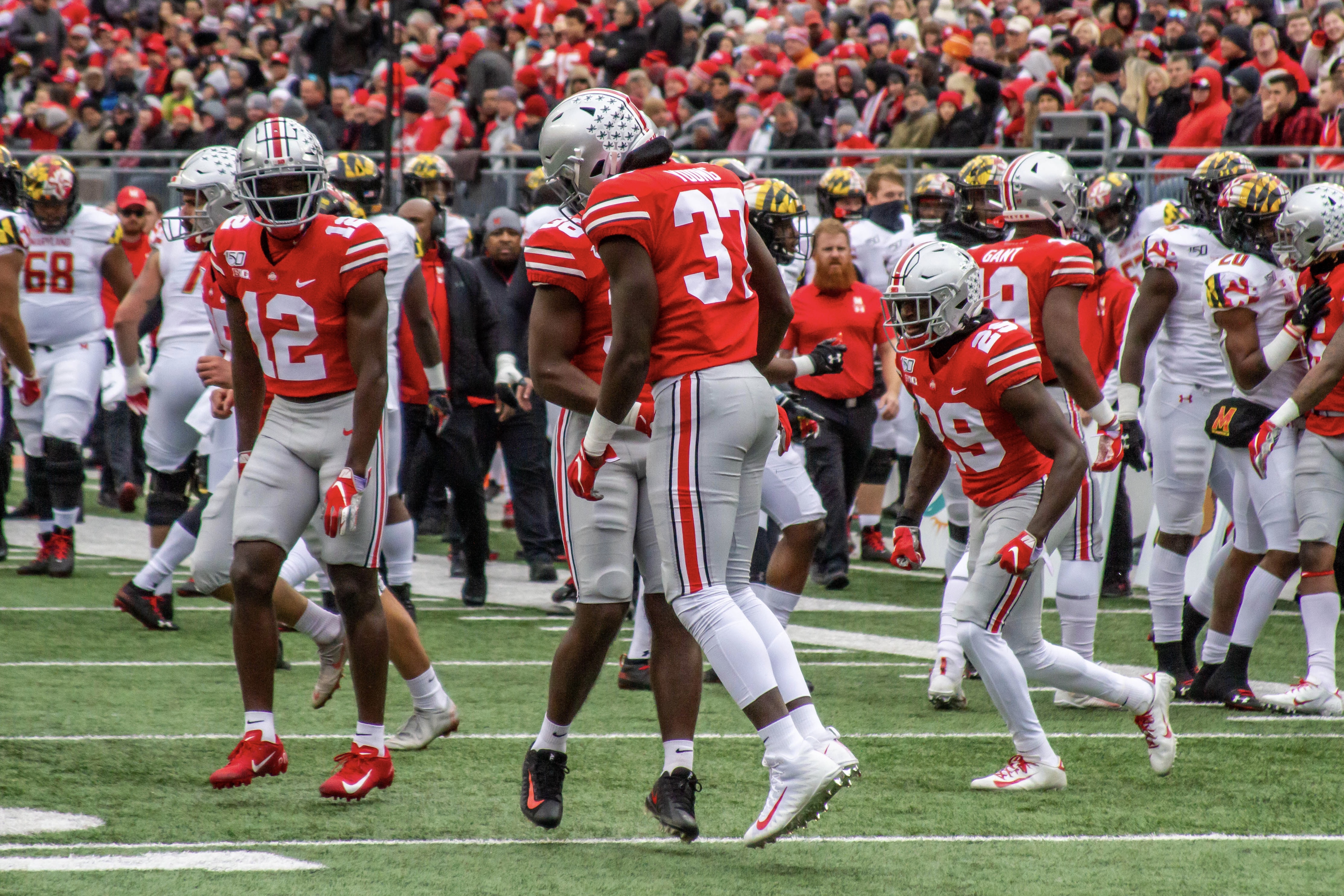 This story was originally published in the May 2021 issue of Buckeye Sports Bulletin.

Shortly after then-new Ohio State head coach Ryan Day announced the hires of co-defensive coordinators Jeff Hafley and Greg Mattison as well as linebackers coach Al Washington in early 2019, the trio began to hint at a structural shift in the way that the Buckeyes operated on defense.

After years of working out of the 4-3 base that served as a standard in college football, Hafley, Mattison and Washington told media at every opportunity that they planned to install the bullet position into Ohio State’s defense.

The bullet, as it was defined then, was essentially a linebacker/safety hybrid, similar to the viper position that Mattison and Washington had deployed at Michigan with players such as Jabrill Peppers and Khaleke Hudson. It would be part of a shift to the 4-2-5 defense that TCU head coach Gary Patterson had popularized in the Big 12, featuring just two linebackers and five defensive backs to better account for strong passing attacks, like the kind that Patterson ran into nearly every week in the Big 12.

In Ohio State’s model, that 4-2-5 would feature the bullet, a single-high safety, a slot or nickel cornerback (depending on the personnel available on the roster) and then the standard two outside cornerbacks.

At the time, it appeared that the position was tailor-made for safety Brendon White, who had starred for the Buckeyes at the end of 2018 and seemed to fit the parameters for the new position to a T, as an oversized safety but an exceedingly athletic and undersized linebacker. When Washington laid out expectations for the position, it felt as though he was addressing White specifically, just without naming him.

However, Washington added a caveat in March 2019 when he spoke to Ohio State media for the first time about the new-look Silver Bullets.

Given that Ohio State did not line up against a slate of exclusively power-based teams in 2019 and 2020, it was odd that the bullet, as it was originally planned, never really came to fruition. Ohio State adhered closely to the traditional three-linebacker sets, flipping into four-linebacker looks with even more frequency in 2020 so that it could get Justin Hilliard onto the field alongside Tuf Borland, Baron Browning and Pete Werner.

Werner seemed to fill the bullet role in 2019 rather than White, though to call it a serious departure from a traditional linebacker role would be generous. For the most part, Werner served in Ohio State’s Sam linebacker role in 2019 as a player who could drop into coverage and operate with a little bit more flexibility but largely remained a box linebacker, the kind that the Buckeyes had deployed for years.

Browning took over the role in 2020, shifting its definition again to an edge rusher/linebacker combination, another departure from the original design of the bullet, but not from the 4-3 linebacker handbook.

In both cases, Ohio State’s explanation for the usage of more typical three-linebacker sets was that its group of linebackers was simply too strong to justify removing any of them from the field for someone who would fit closer to the bullet mold.

“We want to get our best players on the field, and we had a core of really good linebackers last year,” defensive coordinator Kerry Coombs said on April 23. “Everybody would agree that group had experience and talent and that they could play. That was a strength of our defense. As you look at the totality of our personnel this year, we have a really strong front. We have guys that are interchangeable parts up front, and we’re excited about them. We want to make sure we’re maximizing their ability. We got caught in a situation this spring where we had fewer linebackers. That doesn’t mean we’re going to have fewer linebackers in the fall. Those guys come back, are healthy and we’re able to incorporate that.”

As that core group of linebackers moves on to the next level, the Buckeyes seem to be shifting their approach as well, which could lead to a resurgence in bullet discourse and, perhaps, the realization of its original design on the field. In this year’s spring game, Ohio State’s defense took the field for 109 snaps and had a player filling that bullet position in all 109 of those snaps. Craig Young and Ronnie Hickman were both listed on Ohio State’s roster as playing the bullet position, rather than their original listing at linebacker and safety, respectively.

Coombs alluded to a lack of linebacker depth as part of the reasoning behind that move, with projected starter Dallas Gant and rising sophomore Mitchell Melton both missing the spring session with injuries, but he was also quick to stress the importance of getting the best players on the field for his defensive unit. Through the spring, Young and Hickman were significant parts of that conversation.

“I think that what we want to do is get our best 11 guys on the field,” Coombs said. “We have to evaluate who’s healthy and who’s able to play. I think that spring allowed us to continue to develop options along those lines, and it was unfortunate that we had some injuries at linebacker, but it gave us the opportunities to put some different kids in some different spots, which lends itself to depth in the fall.

“That’s not ideal all the time, some guys playing in the box that haven’t played there before, but that doesn’t do anything but serve us well going forward.”

Coombs didn’t mention it directly, but a potential move to that 4-2-5, bullet and all, seems directly tied to the struggles that the Buckeyes had against the pass in 2020. The numbers have been floating around Columbus since Alabama put the finishing touches on its romp over the Buckeye defense in the national title game, and for good reason. The expectation at Ohio State is much higher than No. 122 in the nation in passing yards allowed per game (304.0).

In bringing an extra defensive back onto the field in the form of either Young or Hickman, while removing one of those slower box linebackers, Ohio State is hoping to combat the four- and five-wide receiver sets that teams such as Alabama and Indiana used to gash Coombs’ defense in his first season at the helm.

However, as Washington said back in 2019, Coombs doesn’t expect the move to the 4-2-5 to completely remove the 4-3 from Ohio State’s playbook, no matter what the stats in the spring scrimmage showed. It’s based, instead, around what the opponent is showing Ohio State.

“What the bullet affords you the opportunity to do is to try to play both sets of personnel that the offense has to offer without necessarily having to change your personnel on first- and second-down. I love the way those guys competed this spring, Craig and Ronnie, and I’m excited for their fall. I think it’s going to be a piece of what we do, absolutely.”

Despite both being listed as bullets, Young and Hickman have fairly different physical profiles and seem to bring two different skill sets to the table. A former linebacker, the 6-3, 228-pound Young is considered much more physical than his counterpart and projects as more of a box safety than one who excels in coverage. He still looked more than comfortable against the run and the pass in the spring game, making one of the best plays of the day when he deflected a C.J. Stroud pass down the sidelines to tight end Mitch Rossi.

Hickman, meanwhile, checks in at 6-1, 205 pounds and made the move from safety to bullet. He’s considered the better coverage player of the two and slotted into the nickel cornerback spot against Michigan State in 2020 when the Buckeyes were down a significant portion of their defense.

Coombs mentioned Kourt Williams as a potential factor as well. Williams seems to be a combination of the two – he’s a bit bigger than Hickman at 6-1, 215 pounds, but he came to Ohio State as a safety out of Bellflower (Calif.) St. John Bosco – and was thought of as the ideal fit for that bullet spot by recruiting analysts when he landed with the Buckeyes.

Ohio State sees the differences among the three as a strength and as something that the defense can use to adjust for different offensive looks without needing to shake up the personnel groupings.

“I think that anytime you’re putting together a personnel package, you’re trying to make sure the defense is emphasizing your player’s strengths and not exposing their weaknesses,” Coombs said. “While those two kids are different and Kourt Williams would be the third piece of that puzzle, you’re looking at different types of players. When they’re on the field, you’re going to want to emphasize what they’re going to do best.

Regardless of who lines up for the Buckeyes at bullet this fall or how frequently that bullet finds his way onto the field, Ohio State’s defense has one goal in mind for 2021 – improvement on all fronts and adaptability to what the offense is showing them.

“We have to make sure that we are structuring our defense in order to defend against the offense and attack the offense based on what they do best,” Coombs said. “Based on your schedule and based on who you’re playing, that’s how you formulate the plan. There’s not an overall answer for, ‘OK, in college football they’re throwing the ball more so we have to do this.’ It’s just (week to week). We would like to think that we have more options available to us this fall just because of depth than we had last fall, and we’re excited about that.”