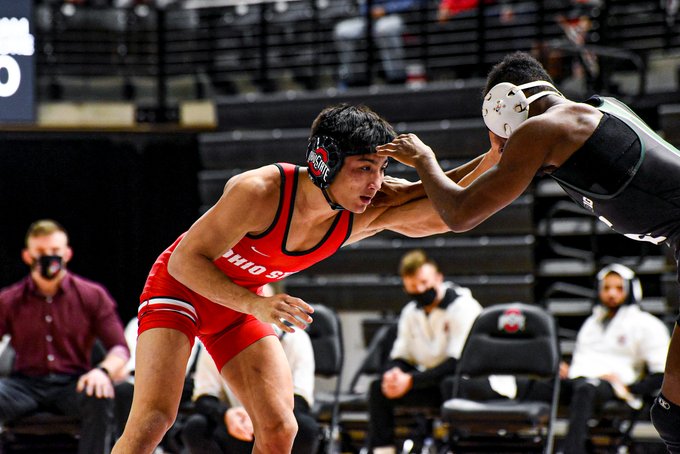 No. 6 Ohio State struck early and never looked back in its Jan. 29 dual against No. 25 Michigan State, a 24-9 victory that gives the Buckeyes a 3-1 dual record on the year, with a road trip Maryland on deck on Jan. 31.

To open the dual, if it wasn’t time to believe before, it certainly is now – Ohio State’s Malik Heinselman is the real deal. No longer is the 125-pounder a case of recruiting hype without the production to back it up, especially after his 5-4 victory over No. 10 Rayvon Foley, which sent the 12th-ranked Buckeye to a 4-0 start on the year in duals.

He did just about everything he was asked to on Friday night. A 5-4 lead was far from safe entering the final minute of the bout, but Heinselman fought off a pair of shots from Foley, fired off his own – all came up begging – and defended for his life within that final frame to hold on for the victory. To say that it set the tone for the Buckeyes may be an understatement.

Jordan Decatur followed that showing with his best showing of the season against Jordan Hamdan, grabbing a 5-0 victory that never saw him seriously challenged.

At 141 pounds, Ohio State appears to have its starter after bouncing back and forth between Dylan D’Emilio and Anthony Echemendia. Echemendia got the nod against the Spartans and put up the kind of performance Ohio State has been looking for from him – a complete one. He still seemed to lose a bit of interest in the second period and appeared gassed in the final frame, but Echemendia never trailed Jake Spiess and didn’t surrender anything late in a 6-3 victory.

If you were going to pick a wrestler from the 133-157 room at Ohio State to struggle here, the man at 149 would have been the last name to come to mind, but that’s exactly what happened for No. 2 Sammy Sasso against Peyton Omania. Omania fought off the Buckeye title contender for two periods and forced a 5-5 stalemate entering the final frame.

Sasso survived with a last-minute takedown to claim the 7-6 decision, but it was a moment of real precarity for the top Buckeye on the lineup.

The Buckeyes wrapped the first half of the dual with an Elijah Cleary bout at 157 pounds that stuck right to form for the redshirt senior. Cleary did little in the way of attacking but defended well, stayed on his feet, and took a 0-0 draw into the final period.

There, Chase Saldate decided that he wanted to wrestle, took an escape point, notched a takedown and put Michigan State on the board with a 4-0 decision.

The second portion of the dual opened just as the first half had, with the Buckeyes in command.

No. 6 Ethan Smith took No. 18 Jake Tucker down in just over 20 seconds and rushed out to a 17-6 victory, giving Ohio State its first bonus points of the dual. No. 4 Kaleb Romero kept the momentum with a very quiet, controlled 14-3 victory over No. 17 Drew Hughes, putting the Buckeyes way out in front with a 20-3 lead entering the final three bouts.

Those final three bouts didn’t go quite as smoothly for the Buckeyes, with No. 16 Rocky Jordan falling 4-2 to No. 13 Layne Malczewski and No. 25 Gavin Hoffman coming up just short against No. 6 Cameron Caffey, 3-2, despite a serious late effort that earned plaudits from head coach Tom Ryan.

Heavyweight Tate Orndorff managed to stop that brief slide though, knocking off Christian Rebottaro 12-1 to give the Buckeyes the 24-9 victory.