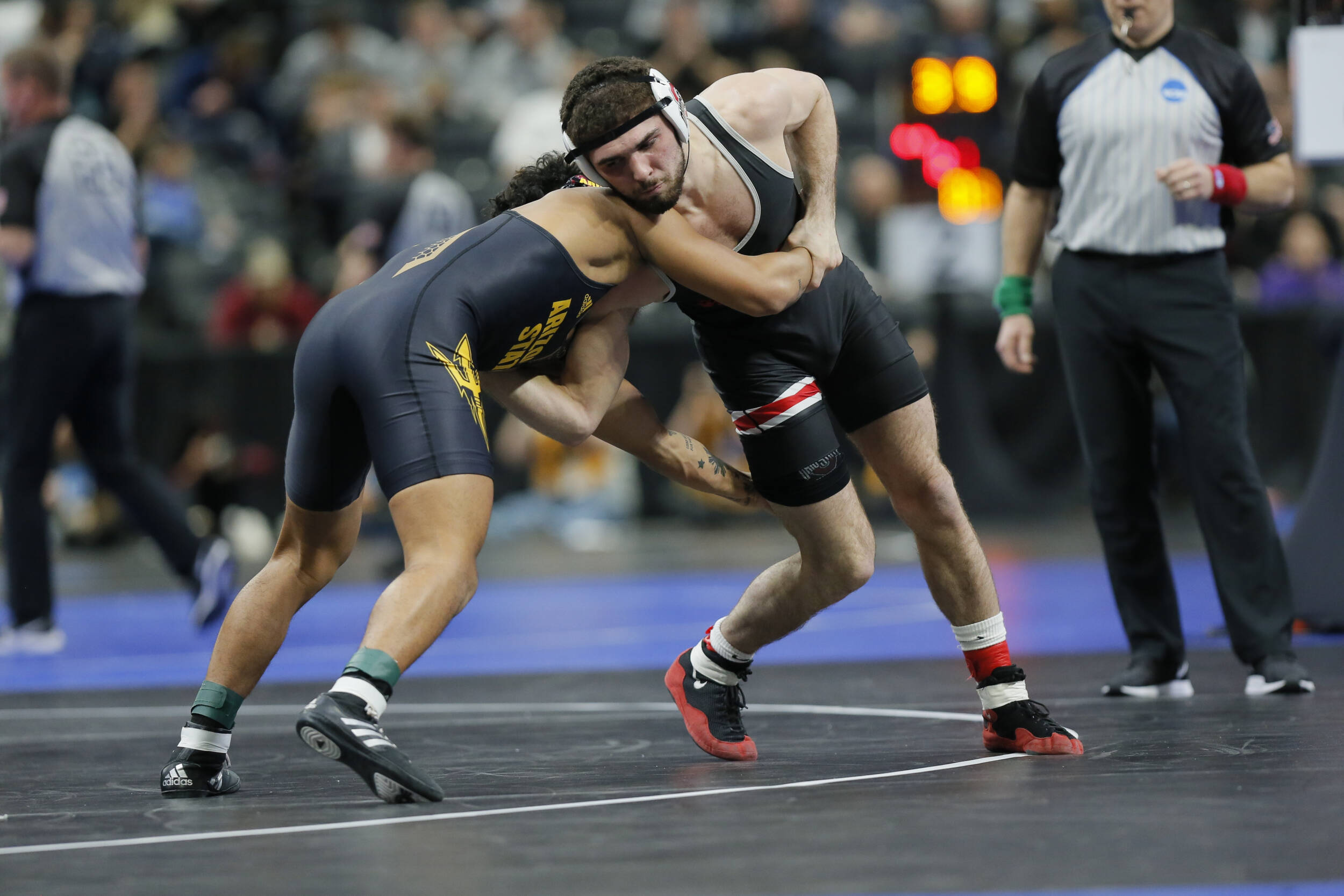 Gavin Hoffman’s magical title run ended when he lost to No. 1 Max Dean of Penn State, 9-3, on Friday. The No. 21-seeded Hoffman is the story of the NCAA Championships and will wrestle for third place in the final session.

Hoffman fell behind early in his 197-pound semifinals match against Dean. The Penn State workhorse secured a two-point takedown in the first and kept Hoffman on the bottom for the entire period. Dean extended his lead with an escape in the second and added a takedown to make it 5-0.

In the third period, Hoffman put two on the board with a takedown, which Dean countered to win a 9-3 decision. Hoffman’s loss sent him to the consolation bracket for a third-place matchup with No. 7 Rocky Elam of Missouri, where he dropped a 3-2 decision.

Hoffman returned to the mat a final time against No. 10 Yonger Bastida of Iowa State. Bastida put Hoffman on his back, and the Buckeye suffered a fall in the first period. He closed the weekend with three upsets, an All-American honor and a sixth-place finish at his first-career NCAA Championships.

Sammy Sasso frequently attacked in his 149-pound semifinal match against Yianni Diakomihalis. However, the No. 1-seeded Cornell middleweight stood firm and the three-time All-American from finding much-needed momentum.

Diakomihalis scored first with a takedown 90 seconds into the first period, but Sasso escaped to cut his deficit in half. Diakomihalis added another two points and led 4-1 after three minutes. The Cornell wrestler added an escape for the  5-1 lead in the second period. He also tacked on crucial riding time that would eventually earn him a bonus point.

Sasso started the third with an escape before the referee awarded him a penalty point for an opponent’s stall. Diakomihalis earned a riding time point to win by decision, 6-3. Sasso falls to the consolation bracket, where he can compete for third place. He wrestled No. 3 Austin Gomez of Wisconsin in the consolation semifinal, who had recently beat him in the Big Ten title match.

Gomez bested Sasso for the second time this season, defeating him in a 6-5 decision. Both wrestlers had three points through the first five minutes of action. Gomez took the lead with a takedown but allowed Sasso to escape with under a minute left in the second period. With the score tied at five-all, Gomez escaped with 1:20 remaining and held to his one-point lead.

In the fifth-place bout, Sasso took the mat against No. 6 Jonathan Millner of Appalachian State. He fended off dangerous shots for Millner to keep the match scoreless. Sasso secured a reversal in the second period and cut his opponent loose to take a 2-1 lead. Miller responded with a takedown late to tie the match a two-all. With 20 seconds remaining, Sasso earned two points and won a 5-4 decision.

The Nazareth, Penn., native closed the season as a Big Ten finalist and NCAA fifth-place finisher. He also won his third All-American award. Sasso returns to Ohio State with another two years of eligibility and will continue to anchor the 149-pound division for the Buckeyes.

Carson Kharchla battled No. 9 Peyton Hall of West Virginia in the seventh-place match at 165 pounds. The first-year NCAA qualifier fell behind in the second period, allowing Hall to earn an escape point. However, Kharchla pushed into the lead after a powerful takedown, and he entered the third with a 2-1 advantage. In the final two minutes, Kharchla secured over a minute of riding time to win the bout, 3-2.

Kharchla closed his first season in the scarlet and gray with a seventh-place finish at the NCAA Championships and an All-American honor. The Powell, Ohio, returns to Ohio State with four more years of eligibility and will push for national titles for years to come.

ROMERO DROPS TO HIDLAY AND TAKES SIXTH AT 184 POUNDS

Kaleb Romero faced No. 3 Trent Hidlay of North Carolina State in the fifth-place match at 184 pounds. He trailed Hidlay 2-1 through the first and allowed the Wolfpack wrestler to extend his lead with an escape to start the second. Romero opened the third period on the bottom and used an escape point to cut his deficit in half.

With a little over a minute remaining, Romero used a knee pick to bring Hidlay to the mat, but the referees did not award him two points. Ohio State assistant coach Logan Stieber tossed the challenge brick, which sent the officials to the monitor. After further review, the call on the mat stood, and Romero lost a hard-fought 3-2 decision.

Romero is the sixth-place finisher at 184 pounds and won an All-American award for his weight class. He will return to Ohio State next season with hopes to push for a Big Ten Championship and NCAA title with the Buckeyes.