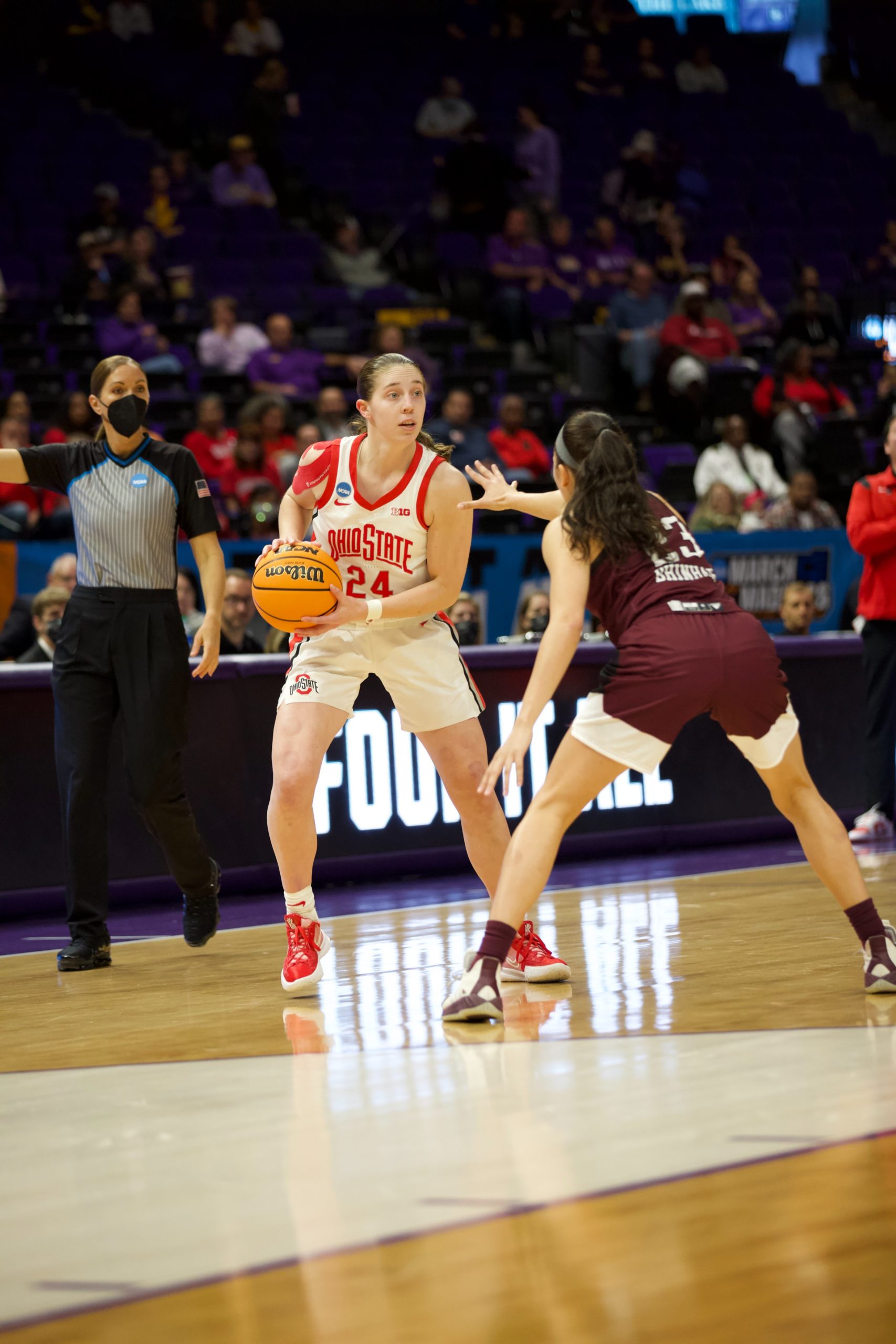 It was a challenging first frame for Ohio State, as the Buckeyes were just 1 of 13 from the field. Missouri State was not significantly better – just 5 of 18 – but took advantage of six offensive rebounds to lead 12-5 at the end of the first. It was the lowest-scoring quarter of the season for Ohio State’s high-powered offense.

The early run came for the Bears despite their two leading scorers – guard Brice Calip and forward Abigayle Jackson, who were also named to the Missouri Calley Conference All-Defensive Team – on the bench due to some foul trouble. In their First Four win over Florida State, Missouri State finished with 23 team fouls, and the team averaged over 18 per game this season.

A free throw from senior guard Braxtin Miller just 15 seconds into the second quarter finally broke the scoring drought that lasted over four minutes, but after a layup from senior guard Taylor Mikesell on the next possession, the Buckeyes were again held scoreless, this time for over three minutes as the Bears increased their lead to 20-8.

Junior guard Jacy Sheldon, who had been held without a 3-point basket since Ohio State’s loss to Maryland on Feb. 17, connected on her first triple in over a month to get the Buckeyes back on the board, and Ohio State followed it up with 3-pointers on its next two possessions – one each by sophomore guard Rikki Harris and Mikesell – to cut the deficit to five points, 22-17.

The barrage from deep seemed to kickstart the previously sleepwalking Buckeyes, as Ohio State closed the second frame on a 14-2 run to lead 31-26 at the half. While it was Missouri State’s defense that dominated in the opening quarter, the Buckeyes took over in the second, forcing six turnovers in the final three minutes of the half that resulted in 10 points during that run.

Despite the momentum built up to close the first half, Ohio State again struggled on the offensive end to open the third quarter, missing its first seven shots as the Bears took a 36-35 lead with 4:45 remaining. Junior forward Rebeka Mikulasikova eventually scored the Buckeyes’ first basket of the half with 3:11 remaining in the quarter to regain the lead for Ohio State, 37-36.

Three lead changes later, the Bears were looking to take a 43-41 advantage into the fourth quarter, but after a miss by Sheldon and an offensive rebound by Mikesell, the Buckeyes found Mikulasikova on the perimeter and she knocked down her first triple in over a month to give Ohio State a 44-43 lead at the buzzer.

Missouri State responded with the first two baskets in the fourth quarter, and Ohio State struggled with getting to the basket, missing its first six shots from the field as the Bears took a 50-46 lead with 7:09 remaining.

Graduate forward Tanaya Beacham hit Ohio State’s first basket of the half and later hit a free-throw to make it a one-point game, and Sheldon then connected on a layup in transition to give the Buckeyes a 51-50 lead with 3:54 remaining. The Bears retook the lead on a trip to the free-throw line, but Mikesell responded with perhaps Ohio State’s biggest shot of the game, knocking down a triple to lead 54-52 with 3:10 left in the contest.

Missouri State had a chance to tie or take the lead down 56-54 with just over a minute remaining, but after a pass went out of bounds, Sheldon was fouled on the other end and knocked down a pair of free throws to give the Buckeyes a 58-54 lead.

The Bears responded to make it 58-56, but after a pair of timeouts by Ohio State, head coach Kevin McGuff got the look he wanted, and Sheldon made an easy drive to the basket to increase the lead to four with under 30 seconds remaining. With time winding down, Missouri State was forced to foul, and Sheldon closed things out at the free-throw line for the 63-56 win.

Sheldon led the Buckeyes in points (25), rebounds (six), assists (five) and steals (five), while Calip led the Bears with 15 points.

Ohio State will go on to face No. 3 LSU or No. 4 Jackson State on Sunday, with times yet to be announced.