Wrestling: Everything You Need To Know About OSU At The NCAA Championships 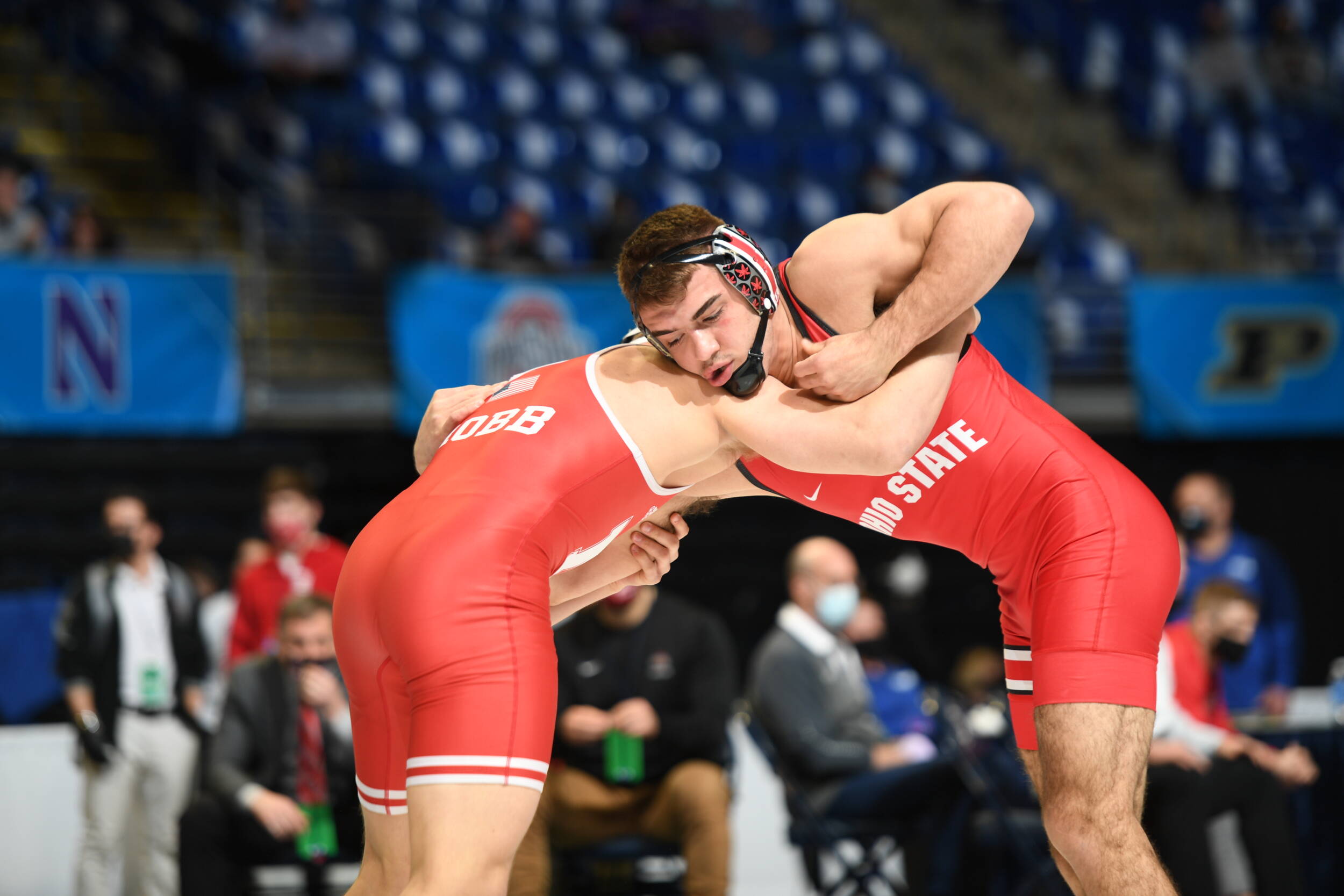 Ohio State wrestling will be represented well at the NCAA Championships, which start today with the first and second rounds in all 10 weight classes, with the quarterfinals and semifinals set for Friday and the medal rounds and championships rounding out the event on Saturday. Seven Buckeyes traveled to St. Louis for the event, filling out the 125, 141, 149, 165, 174, 184 and heavyweight classes after a disappointing ninth-place showing at the Big Ten Championships in the beginning of March.

The national event serves as a chance at redemption for Ohio State. A title isn’t likely – Iowa is a considered a heavy favorite – but Ohio State is still eyeing a trophy of some sort and could get there with a stellar performance.

“So at the national tournament, the way it’s set up, you can do more with fewer people just because of the point scoring system and the format,” assistant coach J Jaggers said on March 15. “If you don’t place at the national tournament, you don’t really score a lot of team points. For us, we have to punch as many guys through to become All-Americans as we can. That’s where you get your points, and then obviously putting guys into the finals. I’d like to have a handful of All-Americans, everybody scoring points would be nice. (We have to be) realistic. There’s going to be a lot of points from Iowa, Penn State and some other schools, but I think if we wrestle our best we can bring home a trophy, which is top four.”

To finish with All-American status, as Jaggers mentioned, a wrestler has to finish within the top eight of your weight class, while top-four finishers earn a spot on the podium. Either would be great news at just about every spot for the Buckeyes, though only three of Ohio State’s wrestlers: Sammy Sasso, No. 1 at 149 pounds; Ethan Smith, No. 7 at 165 pounds and Kaleb Romero, No. 7 at 174 pounds. Ohio State will need its remaining four wrestlers to exceed expectations, while locking in strong showings from each of the top three. A big part of Ohio State’s success will revolve around the little details.

The Buckeyes couldn’t get the details quite right at the Big Ten Championships, and it cost them dearly. Avoiding a repeat is crucial here.

“It’s tough,” Jaggers said. “There are so many matches that are going to be decided where the margin for error is so slim. Then you have the Big Ten’s, and that was probably the worst performance we’ve had as a program in the last decade, finishing in ninth-place, which none of us were happy about. But when you circle back to a couple matches if you just flipped the outcome, just flip a position, one position in three or four matches, then we would have probably been fifth.”

Ohio State’s weekend will start at 125 pounds, where Malik Heinselman is one of the top candidates to jump up into that All-American range. He enters the bracket as the No. 10 seed after a fourth-place finish at the Big Ten Championships and drew Penn State’s Robert Howard in the first round. He’s toppled Howard twice this season and will look to do it a third time for the chance to wrestle either No. 7 Taylor LaMont from Utah Valley or No. 26 Jackson DiSario from Stanford. Heinselman’s 2021 campaign has been dubbed the revenge tour after he defeated several wrestlers that bested him last season, but a matchup with DiSario would present a rare rematch against someone that Heinselman beat last season, 6-3.

Next is Dylan D’Emilio at 149 pounds, the No. 30 seed and one of two at-large bids for the Buckeyes. The redshirt freshman hasn’t found a consistent groove this season, but he’s technically sound and credits the grind of the Big Ten with preparing him for the national tournament.

“This is actually something Ethan (Smith) and I were just talking about the other day, how the Big Ten is the best, and so we’ve been battle tested,” D’Emilio said. “With a limited schedule, I think that’s really important and some of these other conferences don’t have the depth. I’m sure that’s a little bit of a struggle. But fortunately for us, we’ve been able to wrestle against the best guys in the country.”

He’s slated to face No. 3 Sebastian Rivera from Rutgers, who he fell to in an 11-2 major decision earlier this season.

The only Buckeye on this list truly considered a title contender is Sasso, and if we’re being honest, he’s not just a contender: Sasso is the guy to beat at 149 pounds. He’s undefeated and coming off of his first career Big Ten title as a redshirt sophomore. Like D’Emilio, his experience in the Big Ten, especially as a champion, crafted him into the top-seed at the national tournament.

His primary competition is North Carolina’s Austin O’Connor, but both will have to work their way through a solid bracket to meet each other. Sasso will open his day with either Cameron Hunsaker from Utah Valley or Hofstra’s Greg Gaxiola, but there are rumors that the latter has tested positive for COVID and won’t wrestle.

Smith is next at 165 pounds. He’s been one of Ohio State’s biggest positive stories this season, transforming himself from a top-half Big Ten wrestler to the No. 2 finisher in his weight and a dark horse for the 165-pound national title. He’s lost just twice on the season, once in his first match and once in the Big Ten Championships against Iowa’s Alex Marinelli, who sits as the No. 1 seed here.

What sparked his improvement?

“It was just belief,” Smith said. “I think the only difference between me last year at 165 and this year is that I have more confidence and more belief in myself, belief that I am capable of wrestling with these top guys and that I can actually try to win those matches versus keeping it close or not getting beat by a whole bunch.”

Romero stumbled through the end of the season after an injury to his knee, and he’ll look to return to form here on the national stage. He looked to be one of Ohio State’s best wrestlers before the injury, but closed his regular season play on a sour note, losing to Iowa’s Michael Kemerer and Penn State’s Carter Starocci. He fell to Starocci again, along with Michigan’s Logan Massa on the way to a fifth-place finish. All three of those wrestlers loom large in the bracket, but Romero first has to get by No. 26 Jackson Turley from Rutgers, who Romero didn’t get to wrestler in their dual earlier this season.

The 184-pounder is Ohio State’s second wild card, No. 24 Rocky Jordan. The brother of Buckeye legends Bo and Micah, the youngest Jordan has struggled significantly on bottom this season and will need to overcome that to make any sort of noise here. He faced one of the toughest schedules in the nation and No. 9 Jeremiah Kent from Missouri is no drop-off from that at all.

Lastly, Tate Orndorff is the No. 21 seed at heavyweight and will face No. 12 Christian Lance from Nebraska in the first round. The two are uniquely familiar, because they just faced off in the fifth-place bout at the Big Ten Championships – a loss for Orndorff.

Despite the high expectations, Ohio State focused on staying loose and improving those little things in its brief time off. Now, the Buckeyes get to took that to heart.

“If anything, you dial back a little bit,” Jaggers said of practice intensity. “You’re not trying to cram too much at the last second. They are who they’re going to be, (that’s not changing) in three days, so you just want to keep them sharp, concentrate on the areas that are going to show up in all the main, marquee matchups. Those, for the most part, boil down to the same things. Can you finish? How’s your lead management in short time? Can you get out on bottom in short time? Can you hold the guy down, lift and return them in short time? If you just watch the tournament, that’s where matches are won and lost. Those little short time situations and who can get to their stuff.”