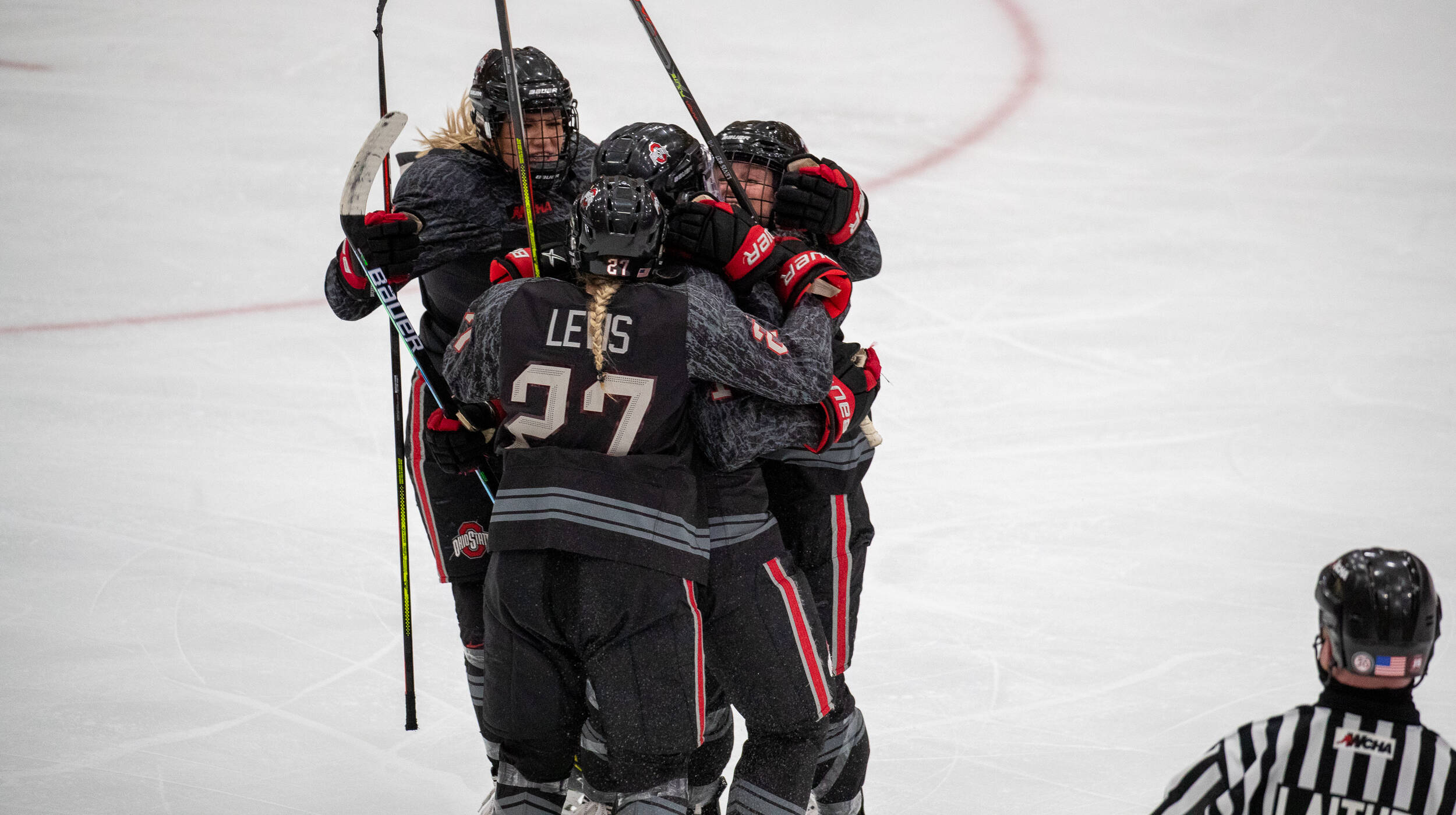 Ohio State will compete against Wisconsin in its second Frozen Four of the Nadine Muzerall era on Thursday after a 3-1 victory over Boston College on Tuesday evening in the quarterfinals. It’s not new ground for the Buckeyes, but it is further validation of a program that has risen to new heights under Muzerall’s guidance since her arrival in 2016.

“We’re very excited to be here at the Frozen Four once again, two out of the last four years now we’ve had the opportunity to represent the Ohio State University on a national stage,” Muzerall said.

It’s also a chance to meet up with a familiar foe. Ohio State’s conference, the WCHA, is well-represented within the Frozen Four with the Buckeyes, Badgers and Minnesota-Duluth, and there’s only one team in the conference that Ohio State has faced off against more this season than Wisconsin (Minnesota). The series has yielded mixed results for the 13-6 Buckeyes.

In their first matchups on Nov. 27 and 28 in Columbus, Ohio State toppled the Badgers in game one, 3-2, but fell 5-0 in the second affair. The second regular season series split as well, both 2-1, with the first falling to Wisconsin and the second to Ohio State in overtime. The only game that divides the two is an overtime victory for Wisconsin in the WCHA finals, a loss that still sticks in Ohio State’s mind entering this matchup.

“We’re getting an opportunity to punch back, losing in overtime leaves a bitter taste in everyone’s mouth so I’m hoping that our team has a little bit of momentum from that,” Muzerall said. “We know each other very well, we know their key players, we know some of their weaknesses and their strength as I’m sure they do ours, but of course we’re excited. Doesn’t matter if it’s Wisconsin or whoever we’re playing, we’re just excited to be at the Frozen Four, although we felt like we really deserved to be here so we fought pretty hard all year to have that status and so now we’re just going to have to produce when it matters tomorrow.”

Despite the familiarity, Ohio State has no room to rest on its laurels, and no interest in it either. Even against a team that it’s seen plenty this season, the Buckeyes are looking to prepare with the same intensity and effort as they would for a brand new opponent.

“We’ll always prepare them like we would with any other team regardless of if we know them or not, we don’t want to put our guard down just because of that, they’re obviously a very talented team with a lot of offense,” Muzerall said. “I think our team has done a great job of shutting them down (inside) and keeping them to some perimeter play. I think we’ve controlled the neutral zone very well to create quick turnovers, so we aren’t preparing any differently because of our success that we’ve had in the year. We might have a couple new plays, you have to tweak a little bit so that you aren’t so predictable.”

The Buckeyes might be the hottest team in the Frozen Four if you’re basing it on recent performance. Wisconsin won its quarterfinals game with Providence handily, but Ohio State trashed Boston College in the final two periods of their matchup, firing 43 shots to Boston College’s eight in the last 40 minutes of the game.

“I do think they played fantastic in the second and third periods,” Muzerall said of the Boston College game. “I think the got their jitters out, we have a young team and so a lot haven’t played at this level before, but what they need to do is trust in the system of what we did to get to this point and believe in themselves. Right now we’re just trying to coach them up mentally. I think the girls are ready, they’re very much ready, that second and third period is what they needed to gather that confidence to lead into tomorrow’s competition.”

The puck is set to drop between the two at 7:06 p.m. on ESPNU, with Northeastern and Minnesota Duluth facing off on Thursday as well to determine the other half of the national championship. It’ll take snapping the staring match that these two programs have found themselves in this season to advance, but Ohio State is excited for the challenge.

“We’re very excited for tomorrow, it won’t be a team that we’re not used to or that we don’t know very well, this will be our sixth time playing them, so it’ll be a great battle,” Muzerall said. “That’s what’s fun about having our border battle, having Ohio State taking on Wisconsin again and being in the same league, there’s a lot of rivalry and we’re very excited to have this opportunity.”