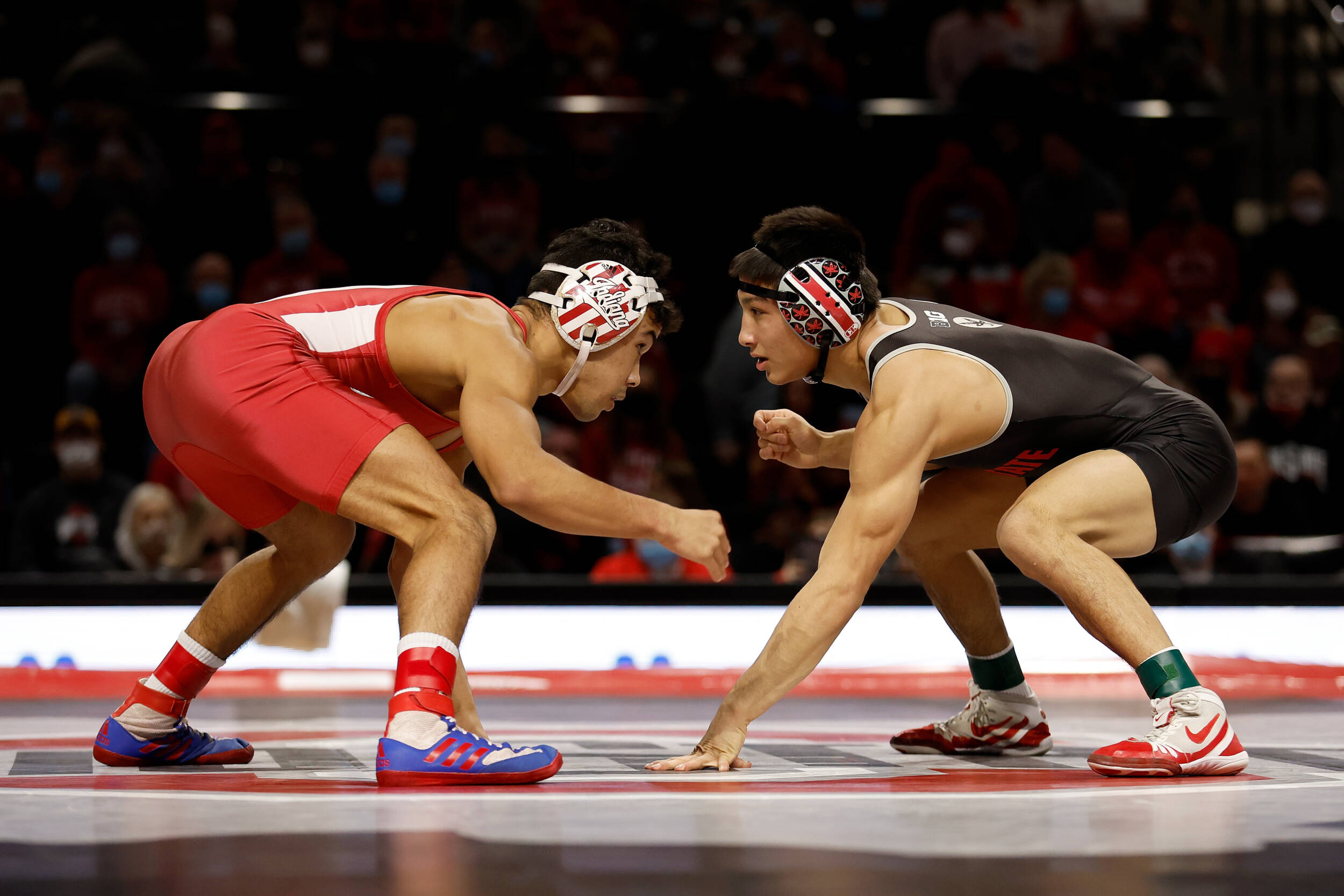 Malik Heinselman (125), Dylan D’Emilio (141), Sammy Sasso (149), Carson Kharchla (165), Ethan Smith (174), Kaleb Romero (184), Gavin Hoffman (197) and Tate Orndorff (285) will represent the Buckeyes on the national stage. Buckeye Sports Bulletin offers a recap for all eight wrestlers in this article. However, a full preview will be featured in the March 19 print edition of BSB.

Heinselman qualified for his fourth consecutive NCAA Championships after taking fifth at the Big Tens last weekend. He claimed the No. 12 seed at the national tournament and will face No. 21 Taylor LaMont of Utah Valley State in the first round.

The Castle Rock, Colo., native went 20-5 this year and featured a 73-34 record in his four collegiate seasons. Heinselman has a 2-4 mark at the NCAA Championships after finishing 1-2 in both appearances. The 2020 tournament was canceled because of the COVID-19 pandemic.

D’Emilio will make his second NCAA Championship appearance this season after finishing fifth at the Big Ten Championships last weekend. He is the No. 17 seed at 141 pounds and will face No. 16 Quinn Kinner of Rider in the first round.

Sasso will make his third NCAA Championships appearance after a runner-up finish at the Big Tens last weekend. The Nazareth, Penn., native failed to defend his 149-pound title against Wisconsin’s Austin Gomez, who claims the No. 2 seed at the national tournament.

He was the No. 3 seed at the 2020 NCAA Championships before they were canceled due to the pandemic and claimed the No. 1 seed last year, finishing second behind North Carolina’s Austin O’Connor. This match ended with a controversial no-takedown call for Sasso in the final seconds.

Sasso, who went 21-2 this season, will face No. 29 John Arceri of Buffalo in the first round next weekend.

Kharchla will make his first NCAA Championships appearance this season after missing all of 2021 with a knee injury. He qualified for the tournament after finishing fourth last weekend at the Big Tens.

Kharchla went 21-3 this year and claimed the No. 1 seed at the conference championships last weekend. He lost two matches in sudden victory, including a third-place bout to Wisconsin’s Dean Himiti. His performance earned him the No. 7 seed in the NCAA tournament, where he will face No. 26 seed Lucas Revano of Penn State in the first round.

Smith qualified for his fourth NCAA Championships this season with a third-place finish at the Big Ten tournament last weekend. He will compete for the second time at 174 pounds in the NCAAs after wrestling at 165 last year. He claimed a 2-2 mark the last time he qualified at his current weight in 2019.

Smith, a two-time All-American, qualified at 165 during the 2020 tournament before it was canceled and again in that class the following season, finishing with a 4-1 record as the No. 7 seed. He claims the same ranking this year and will face No. 26 seed Tyler Eischens of Stanford in the opening round.

Romero will make his third NCAA Championships appearance after a fourth-place finish at the Big Tens last weekend. It will be his first time qualifying at 184 pounds.

Romero was the No. 7 seed at 174 pounds in last season’s national tournament, earning a 2-2 record. The Mechanicsburg, Ohio, native, will face No. 26 seed Donnell Washington of Indiana this year. The two wrestlers did not meet on the mat when the Buckeyes squared off with the Hoosiers on Feb. 13. Romero instead battled Sean Grim, who he pinned in 2:25.

Hoffman finished eighth at the 2022 Big Ten Championships to qualify for his first-career NCAA tournament. He will open at the No. 21 seed and face No. 12 Tanner Sloan of South Dakota in the first round.

The Montoursville, Penn., native took over the 197-pound division during the second half of the regular season. He went 13-10 this season with a 6-5 (4-4 Big Ten) dual record, recording two major decisions and one technical fall.

Orndorff will make his fourth NCAA Championship appearance this season and second as a Buckeye. Last year, he was an All-American with an eighth-place finish as the No. 21 seed. At Utah Valley State, Orndorff went 2-2 in 2019 and was the No. 8 seed at the 2020 tournament.