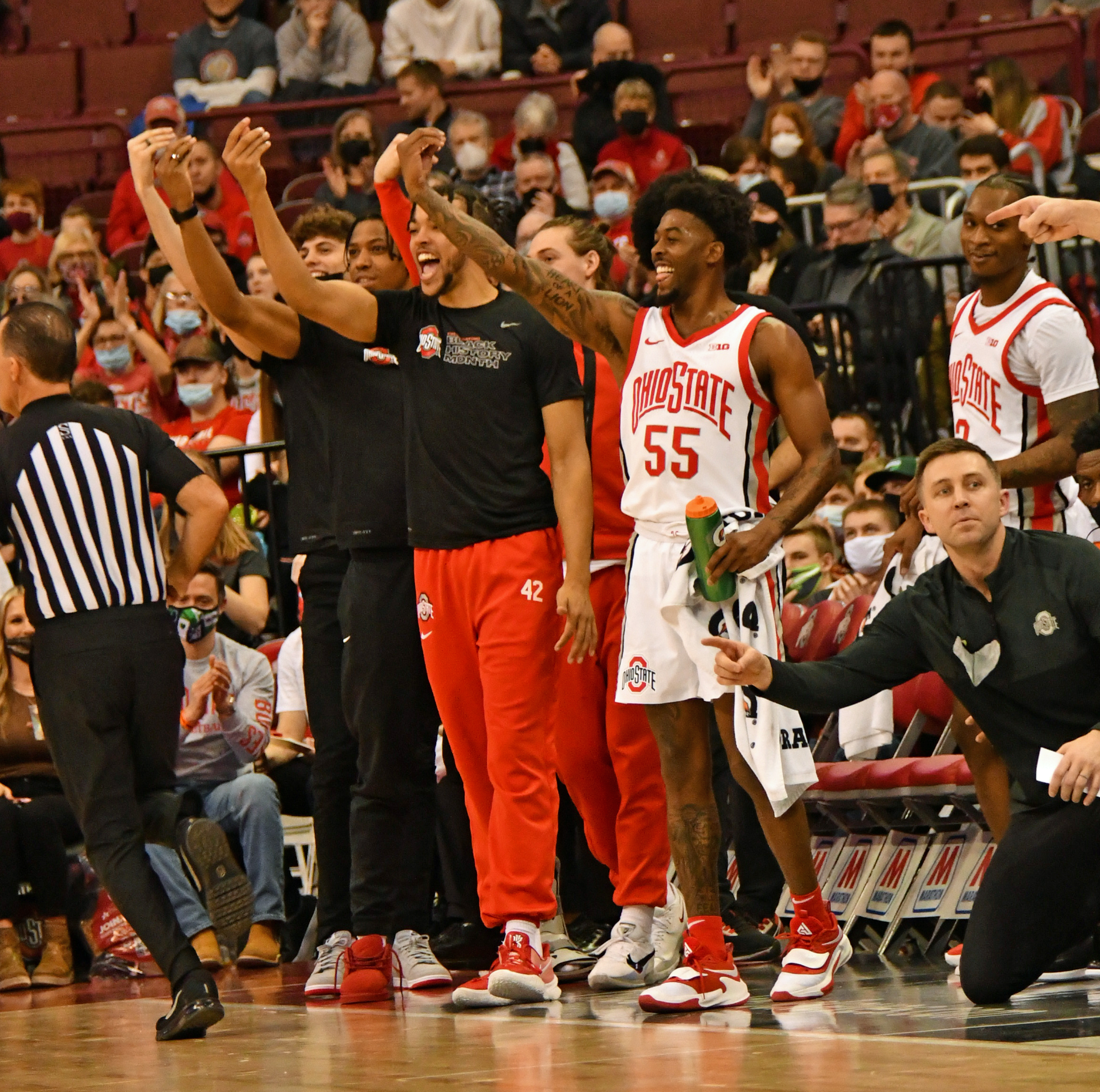 Ohio State’s hopes in the Big Ten tournament this season revolve more around establishing momentum than around winning the whole event. The Buckeyes would need four wins in as many ways to do that, and though it isn’t unheard of, head coach Chris Holtmann seemed comfortable in saying that if the Buckeyes can play well in Indianapolis while working on a return to full strength, he’ll be satisfied with the trip.

As the Buckeyes enter conference tournament play tonight with a 9 p.m. matchup against Penn State, they hope to keep up a recent run of tournament form while understanding that the most important part of the season is yet to come.

“There’s a reality that the NCAA tournament is what is most remembered about your season,” Holtmann said. “Maybe there are a few games that people remember, but the tournament is what people really reflect on. We’ve had three opportunities since we’ve been here, and I think we performed well in two of them, and in some cases, it’s a matchup thing. But right now I’d like to get healthier and play better, and that’s what we’re looking for this week.”

With the Nittany Lions specifically – which knocked off Minnesota in the first round on March 9 – Ohio State has a pair of regular-season victories on its resume and will need to overcome what could be a more aggressive opponent with new tricks up its sleeve because of it.

“It’s really important that you come with a level of aggressiveness and quality of play,” Holtmann said. “Last year we benefitted a little bit because our first two games – we played against a team we’d only played once in Minnesota, and then Purdue had beat us twice, Michigan beat us once. This year it’s a little different, having to play a team who you’ve beaten a few times and who will be coming off a win.”

Ohio State will have some health issues to deal with as well, with forward Kyle Young out as he goes through concussion protocols, and center Zed Key questionable with an ankle injury. Holtmann expressed confidence in his team, but made it clear that getting healthy was just about the most important thing for the Buckeyes right now.

“Last year, we struggled there at the end and won three games in three days,” Holtmann said. “We’d like to be healthier and playing a little better, but I feel confident in this group and what we can be. We’ve played three Big Ten tournaments and we’ve won four games. We’ve done some good things in this tournament but right now it’s important for us to get healthy.”

Penn State does at least offer a fairly favorable matchup for the Buckeyes. The Nittany Lions have struggled often on offense this season, and Ohio State has proven somewhat comfortable with guarding two of the three leaders of that PSU offense, matching former Penn State standout Jamari Wheeler up with guard Sam Sessoms, and some combination of Eugene Brown III, Young and E.J. Liddell on forward Seth Lundy – at least in the first matchup, he didn’t play in the second game. With Young in question and Liddell critical for offensive flow, the responsibility there might fall to Brown.

However, the bigger question is in defending Jalen Pickett. The 6-4 guard has 34 combined points against the Buckeyes this season, dropped 22 against Minnesota and has only improved as the season has developed. Ohio State has been largely without a viable defender for bigger guards all season long, and the onus for locking up Pickett may be on freshman Malaki Branham this time as Brown shifts into more of a post role to fill in for the injured pieces of the roster.

Branham has flashed plenty of defensive potential this season, but bigger lifts have proven problematic for him both on that side of the ball and in the impact they have on his offensive output. Ohio State will likely need a big game from him on offense, and can’t afford a limited Branham with his focus largely on containing Pickett.

All told, Ohio State’s fate against the Nittany Lions may come down to comfort in close games. That’s been a mixed bag this season for the Buckeyes, but has been important in each of the first two matchups between the two, and certainly wouldn’t be new to the Nittany Lions either.

“In the second game, it was a one- or two-possession game in the last two minutes here,” Holtmann said. “Playing teams for a third time that are obviously good, well-coached teams, it will be a challenge in this first game for sure.

“Penn State has played in a lot of really close games. They can really make it difficult for you because they’ve got a couple of guys who can individually go off and get between 20 and 30 points.”