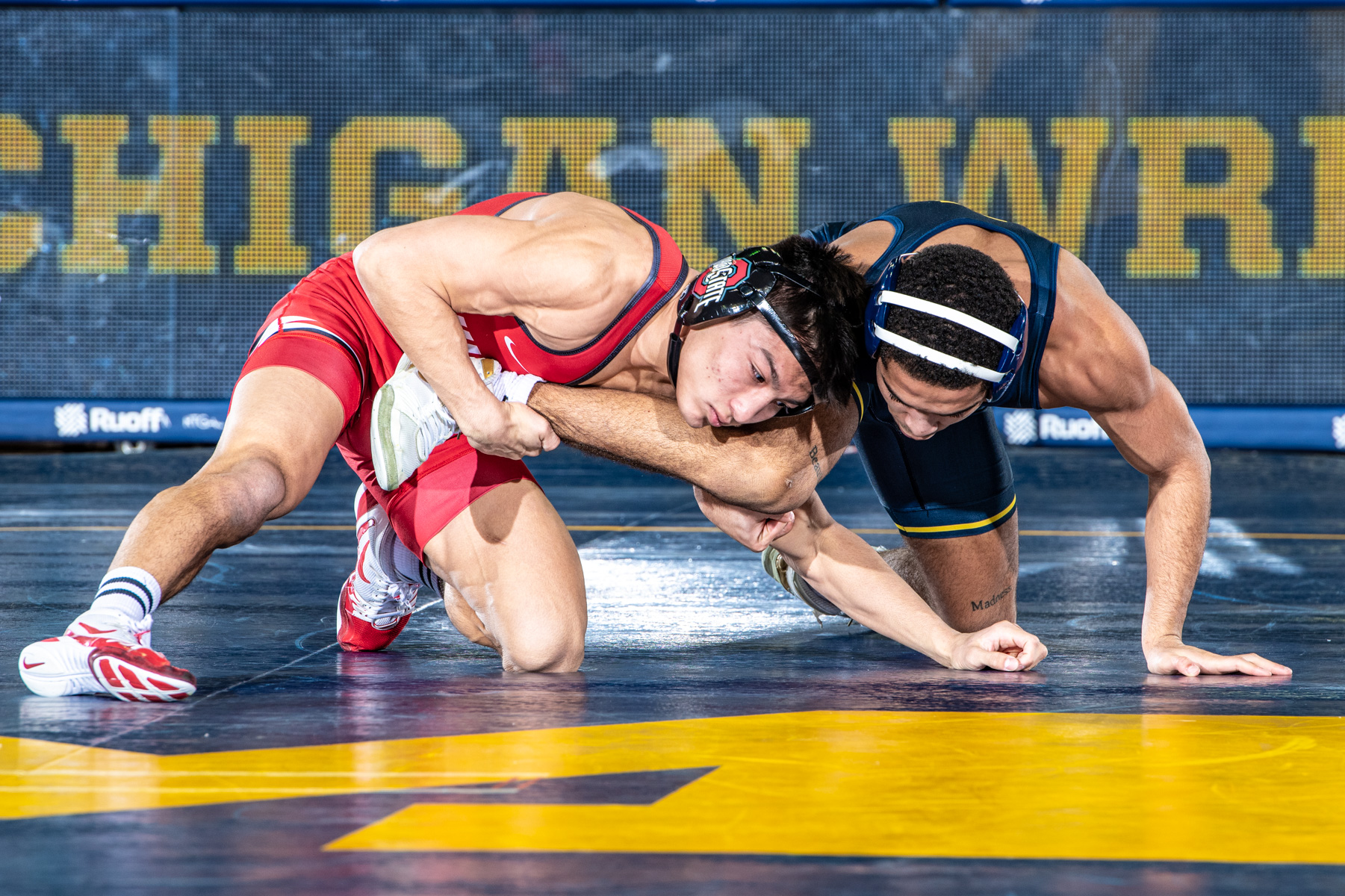 The Big Ten wrestling championships start from the Bryce Jordan Center in University Park, Pa., on March 6, and BSB has you covered for everything that you need to know about Ohio State’s wrestlers entering the two-day event, their matchups, and how you can watch all of the action over four sessions.

“I’m really excited,” Buckeye head coach Tom Ryan said. “I think it’s appreciated by all the coaches and the fan base. Wrestling is the sixth largest participation sport in the country. A lot of people follow it. And I think one of the reasons why the Big Ten has stepped up the coverage is, beside the fact that there’s lots of interest is that we’re only allowed two fans for each student athlete. Typically the Big Ten’s will draw 10-15,000 people. If they don’t get to watch it in person, it seems rational that they watch it on on TV. We’re excited about the coverage. We’re excited about the growth of the sport.”

The official bracket for the event was released on March 5, giving Ohio State a clear picture of its path to the podium and to NCAA qualification for most – if not all – of its wrestlers.

Starting off at 125 pounds, Ohio State’s third-seeded Malik Heinselman will take on the No. 14 seed, Zach Spence, of Maryland. The top two seeds, Spencer Lee (Iowa) and Liam Cronin (Nebraska) drew byes, leaving the lowest seed for Heinselman’s first-round matchup. With a win, Heinselman will draw either Robert Howard of Penn State or Eric Barnett of Wisconsin.

“I think Malik has stepped up this year,” Ryan said. “We’ve seen a Malik that has been able to complete matches, where last year in the waning seconds of matches, he lost just too many times. Unfortunately that becomes habitual, it’s hard to break your mind of that. He’s done a really nice job.”

At 133 pounds, No. 8 Jordan Decatur of Ohio State will take on No. 11 Tucker Sjomeling of Nebraska, with the winner squaring off in the next round against Iowa’s Austin DeSanto. Ohio State rested Decatur against Iowa in their regular season dual, so he hasn’t yet faced DeSanto this season.

No. 7 seed Dylan D’Emilio takes charge for Ohio State at 141 pounds against No. 11 Danny Bertoni of Maryland, with Penn State’s Nick Lee waiting in the next round. D’Emilio, who got the nod after a season-long battle with freshman Anthony Echemendia (out with an injury now), fell to Lee in the final dual of the regular season.

Ohio State’s top contender is at 149 pounds, with No. 1 seed Sammy Sasso drawing a first-round bye. He’ll square off with the winner of the No. 8 Mike VanBrill (Rutgers) vs. No. 10 Peyton Omania (MSU) in the second round.

“You can be the No. 1 seed and in your quarterfinal bout against the No. 8 seed, he conceivably could be the eighth-ranked guy in the country,” Ryan said. “That’s how competitive the conference is. Typically the No. 1 seed is going to face a much lesser opponent and in a lot of conferences across the country the No. 1 seed in the quarterfinals should, to some degree, not be tested. Not in the Big Ten, so seeding is incredibly important on one level because you know the better your season was the better chance you should have in the early rounds of moving forward. But we see over and over again in this conference No. 7 seeds beating No. 2 seeds, No. 6s beating No. 3s. Ultimately, you just have to wrestle. Have to be ready to wrestle.”

The 157-pound bracket sees Ohio State’s No. 9 Elijah Cleary matched up with No. 8 Garrett Model of Wisconsin for the opportunity to wrestle the top seed, Northwestern’s Ryan Deakin.

Ohio State has another favorite at 165, where No. 3 Ethan Smith has been paired with the 14th-seed, Wisconsin’s Josh Otto. The winner will likely draw Joe Lee, the No. 6 seed from Penn State.

“Ethan Smith is another one,” Ryan said. “We lost Carson Kharchla, arguably one of the top 165 wrestlers in the country. We’re really fortunate, even though we lost Carson to an injury early, to have someone like Ethan Smith. He’s been on fire all year. He’s been fantastic.”

Kaleb Romero didn’t quite earn the seeding that he was hoping for at 174 pounds, checking in as the No. 6 seed, but his first-round matchup is still a favorable one against No. 11 D.J. Shannon from Illinois. A win here for Romero would likely mean the chance to avenge his most recent loss against Penn State’s No. 3 Carter Starocci in the second round.

“Kaleb has been really good, but he’s been slowed by some injuries and by some COVID issues,” Ryan said. “But I feel really good about him.

No. 10 Rocky Jordan will take on No. 7 Max Lyon at 184 pounds, with the winner wrestling Christopher Weiler of Wisconsin. Jordan has struggled throughout this season but told media on Wednesday that he feels good entering tournament play.

Gavin Hoffman represents Ohio State as the No. 9 seed at 197 pounds and will wrestle No. Matt Wroblewski from Illinois in the first round, with the winner moving on to Nebraska’s Eric Schultz, the top seed.

“Gavin Hoffman, has done really well compared to some other guys in how you make gains, how you close ground on those in front of you and how you separate from those that are alongside you,” Ryan said. “Gavin Hoffman ran almost 400 miles during the quarantine and he’s a better wrestler for it.”

Lastly, No. 8 Tate Orndorff will look to defeat No. 9 Christian Rebottaro from Michigan State for the chance to wrestle top-seeded Gable Steveson of Minnesota.