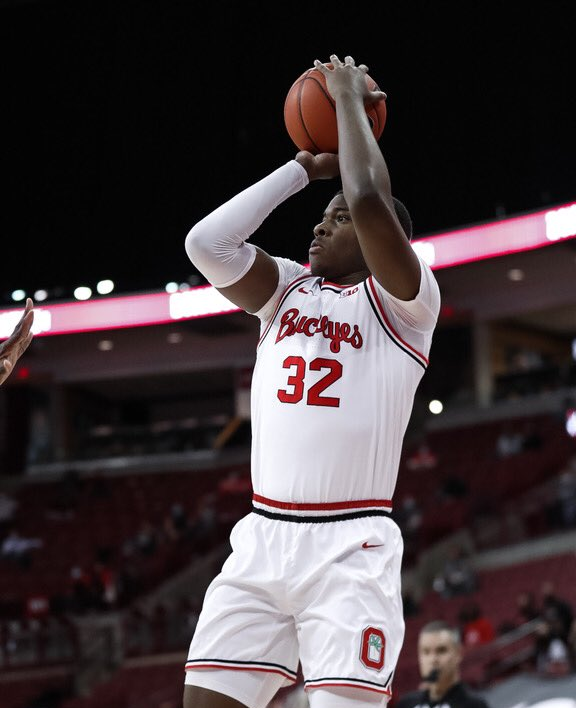 The No. 7 Ohio State men’s basketball team fell 73-68 to No. 4 Illinois for its fourth straight loss despite a late surge in a 19-point performance by sophomore forward E.J. Liddell at Value City Arena on March 6.

“They made a few more plays down the stretch, hard-fought game, but give Illinois credit,” Ohio State head coach Chris Holtmann said. “We defended better in the second half, certainly than the first half, but just didn’t make enough plays there late.”

Sueing hit a pair of foul shots for Ohio State before back-to-back buckets by Liddell put the Buckeyes up 60-56 with 6:48 left.

The Illini connected on 3 of 4 free throws to cut the deficit to 60-59 with 5:51 on the clock, and Liddell answered with a three-pointer. Curbelo hit a couple of foul shots before a Washington layup, and then senior guard Trent Frazier drilled a three-pointer to cut Illinois’ deficit to 65-64 with 4:11 left.

Then, Liddell hit the biggest shot of the game for the Buckeyes. The standout sophomore nailed a three-pointer on a dish from Washington to push Ohio State’s lead to 68-64 with 3:48 left.

However, Ohio State went ice cold down the stretch, and Illinois capitalized on the road. After junior guard Ayo Dosunmu split a pair of foul shots, senior guard Da’Monte Williams nailed a three-pointer to tie the game at 68 with 1:31 left. Then, Dosunmu converted an and-one with 44 seconds left to take a 71-68 lead, and the Illini held on for a 73-68 win. The Buckeyes missed their final 10 shots following Liddell’s triple.

“We were in the game the whole time,” Ohio State fifth-year senior guard C.J. Walker said. “We’ve just got to figure out a way to finish, make baskets, get the stops that we need.”

Overall, Holtmann saw improvement in his team’s offense following its previous three losses, noting that Ohio State may have beaten an elite team if another shot or two fell through.

“We played against a good defense, and we’ve just got to be more committed to getting the ball where we need to get to. But we’re probably having a different conversation if Duane makes that three coming to his left. That was a pretty clean look.”

Illinois started strong in Columbus with a 6-0 lead through the opening two minutes, but Ohio State answered with an 11-0 run to take an 11-6 lead with 16:10 until halftime.

Sueing and Washington knocked down three-pointers with a Walker layup in between before Sueing converted an and-one to cap the stretch. Frazier picked up his second foul on Sueing’s old-fashioned three-point play, heading to the bench for Curbelo.

Curbelo came up big off the bench for the Illini, scoring or assisting on 11 of their next 13 points to help the visitors take a 19-17 lead with 12:20 until intermission.

Consecutive buckets by Dosunmu pushed Illinois’ lead to 23-17 and capped a 9-0 spurt with 8:56 until halftime. Illinois rode its momentum to hold a 36-26 edge with 4:35 until the midway point with sophomore center Kofi Cockburn, Dosunmu and Curbelo leading the charge.

Ohio State answered with back-to-back triples by Liddell and junior wing Justin Ahrens to cut the deficit to 36-32 at home with 3:40 left before the break. A Curbelo layup and a converted and-one by Dosunmu pushed Illinois’ edge to 41-32 with just 1:09 until halftime, but the Buckeyes bounced back with a three by Ahrens and a rebound putback by Liddell to cut the halftime deficit to 41-37.

The Buckeyes trailed by only four at halftime despite shooting just 42.4 percent (14 of 33) from the floor and allowing Illinois to shoot 62.1 percent (18 of 29) from the field. The Illini scored 30 points in the paint to 16 for Ohio State.

The Buckeyes trailed by only four at halftime despite shooting just 42.4 percent (14 of 33) from the floor and allowing Illinois to shoot 62.1 percent (18 of 29) from the field. The Illini scored 30 points in the paint to 16 for Ohio State.

“We came into halftime and we saw what they were shooting percentage-wise, so that was something we had to focus on and an area we had to take pride in,” senior forward Kyle Young said. “We just tried to come out and play harder. They were getting way too many easy layups in the first half, whether that was just from throwing it in the post or easier drives to the rim. We just knew we had to step it up defensively and bring more intensity.”

After trailing by four at the half, Ohio State opened the second half with a 6-0 spurt to take a 43-41 lead just 2:25 into the frame. Walker gave the Buckeyes the edge on a coast-to-coast play, stripping the ball from Cockburn and taking it all the way for a fastbreak layup.

With Ohio State leading 45-43 with 16:27 left, Illinois ripped off a 7-0 streak sparked by an alley-oop finish by Cockburn to take a 50-45 lead with 13:19 remaining. The Buckeyes tied the game at 50 with 10:52 to play on a three-pointer by Walker off the dribble following a Liddell jump hook.

The Illini were led by 19 points apiece from Dosunmu and Curbelo, who had six assists, while sophomore center Kofi Cockburn contributed 12 points and six boards.