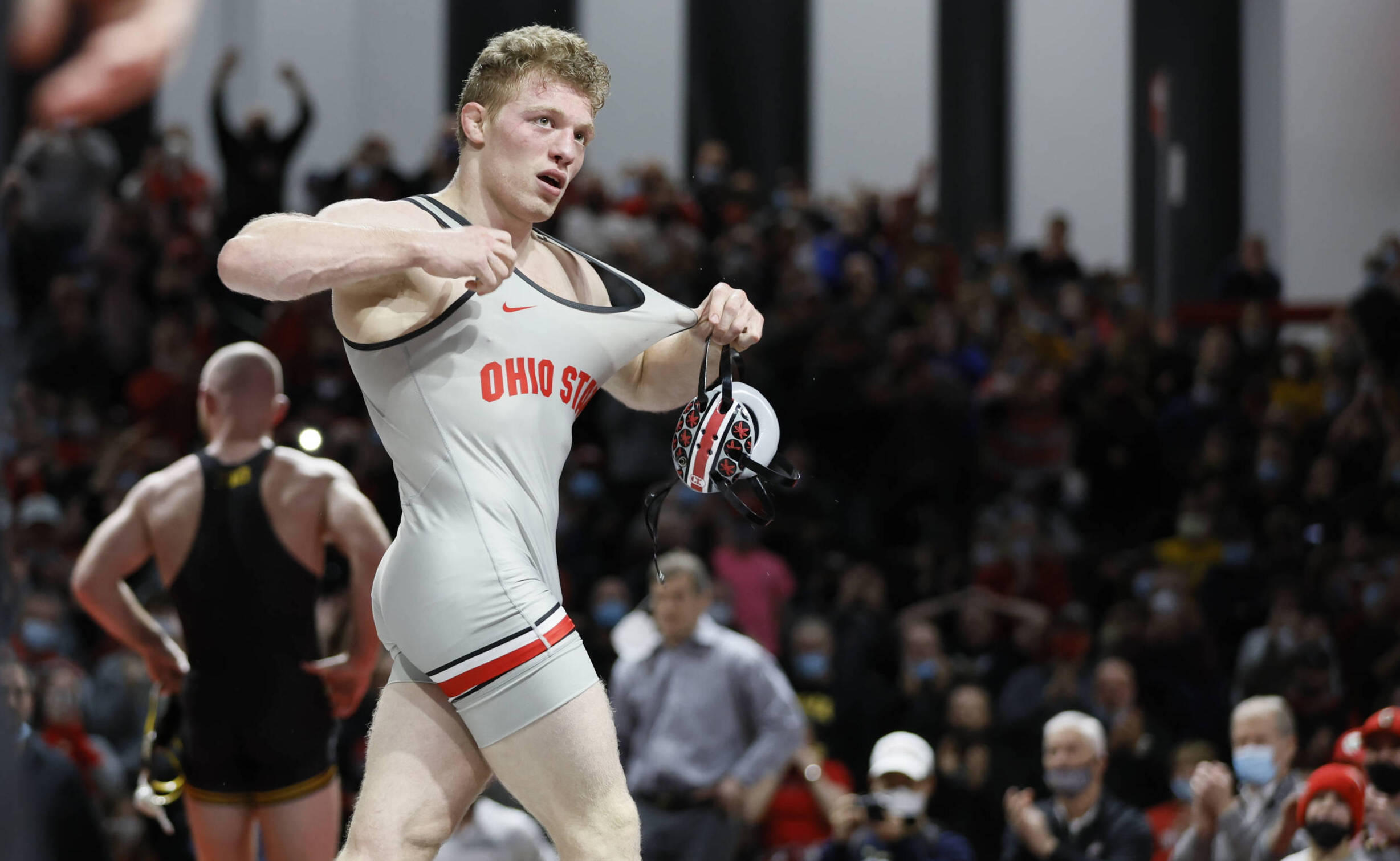 The 157-pound class was a revolving door for Ohio State wrestling this season. Three different wrestlers competed in duals at the weight, including Jashon Hubbard, Bryce Hepner and Isaac Wilcox, while Kevon Freeman competed in the division at multiple tournaments.

Hubbard started in the Buckeyes’ season-opening dual against North Carolina, falling to then No. 2 Austin O’Conner — the 2021 NCAA Champion at 149 pounds. Hepner claimed starts in the next two duals, losing a close 3-2 decision to then-No. 29 Connor Brady of Virginia Tech before defeating Notre Dame College’s Sandro Ramirez in a 15-0 technical fall. Hubbard reclaimed the starting spot for the next five matches, finishing with a 2-3 record in those opportunities.

Wilcox took the reins when Ohio State faced Penn State on Feb. 4 and didn’t relinquish his position for the remainder of the regular season. The Holladay, Utah, native lost in sudden victory to the Nittany Lions’ Terrell Barrachough before losing a decision to Rutgers’ Robbert Kanniard. He won his first start against Minnesota’s Cael Carlson, who had an injury. He followed up that bout with a 3-2 win over Jonathan Kervin of Indiana to close the regular season.

Without a clear-cut front-runner at the weight class, Ryan and his staff held a wrestle-off to decide which wrestler would represent the Buckeyes at the Big Ten Championships.

“We were waiting for someone to own the weight and put the exclamation point on their training, but that didn’t happen,” Ryan said. “Some of that was out of their control. There were injuries all over the place, so nobody took ownership over the weight class. We felt as a staff that the only fair thing to do would be to have a wrestle-off.”

Ryan said the wrestle-off took place before the entire coaching staff and the team. Everyone involved knew the rules and the expectations — that whoever won the tournament would win the approval and support of the whole program as they wore the Buckeye singlet in Lincoln.

Hepner defeated each of his opponents to claim his spot at the Big Ten Championships. The Avon, Ohio, native earned the No. 9 seed after finishing the 2021-22 regular season 3-3 with a 1-1 record in duals. This year, Hepner also wrestled unattached from the program, collecting a 8-2 mark with a title at the Ohio Intercollegiate Open and a top-five performance at the Cliff Keen Invitational.

“(Bryce) will have to wrestle extremely well and probably steal a spot at the NCAA Championships,” Ryan said. “He’s looking for a wild card spot this year and will need to steal a spot from someone that has an off weekend in their conference tournaments. He knows the task in front of him, and I think that he is ready for whatever comes this weekend.”

Kharchla joins Sasso as the only Buckeyes to claim No. 1 seeds at the Big Ten Championships. He entered the starting lineup for the first time as a Buckeye after suffering a torn ACL before last season began. Ryan said he has been impressed with Kharchla’s ability to bounce back from his injury and perform at a high level.

“We’ll never know what would have happened last year, but I believe he would have won the nationals if he didn’t tear his ACL,” Ryan said. “He’s one of the best wrestlers that I’ve ever had in this program. He’s an amazing finisher. He lives a really good life. He loves wrestling, and he’s extremely talented. He’s got power, speed, skill. He’ll fight for a Big Ten title and a national championship this season.”

Kharchla’s defining win came against defending 165-pound Big Ten champion Alex Marinelli, who took the No. 2 seed this season. Kharchla defeated Marinelli, 3-2, using a late-match takedown. With the wrestlers deadlocked in the third period, Kharchla swept underneath Marinelli’s waist and leveraged his upward momentum to topple the top-ranked Hawkeye to the floor. The official shot his arm into the air with two fingers pointing to the ceiling, and the 4,400 Buckeye fans erupted with loud praise in the Covelli Center.

The Powell, Ohio, native said the victory offered him a significant boost that he carried with him the remainder of the regular season. Kharchla finished the year 19-1 with a 10-0 record in duals (6-0 Big Ten). He recorded five major decisions, five technical falls and one pin, contributing to his team-leading plus-83 point differential.

Kharchla feels excited about his first opportunity to compete in the Big Ten Championships, claiming that all of his preparation has been built toward the conference and national tournaments.

“All the work is done,” Kharchla said. “It’s time to show who you are and how bad you want it. It gives me a lot of confidence that our team wants to go out and see how good we can be today. If you lose, you lose — that’s life, and that’s wrestling. It still goes on. I want to go out there, have confidence and let it all go. There’s no better feeling in the world than when you look back at a match and you can say you gave it everything I had, and I’m happy with how I wrestled.”