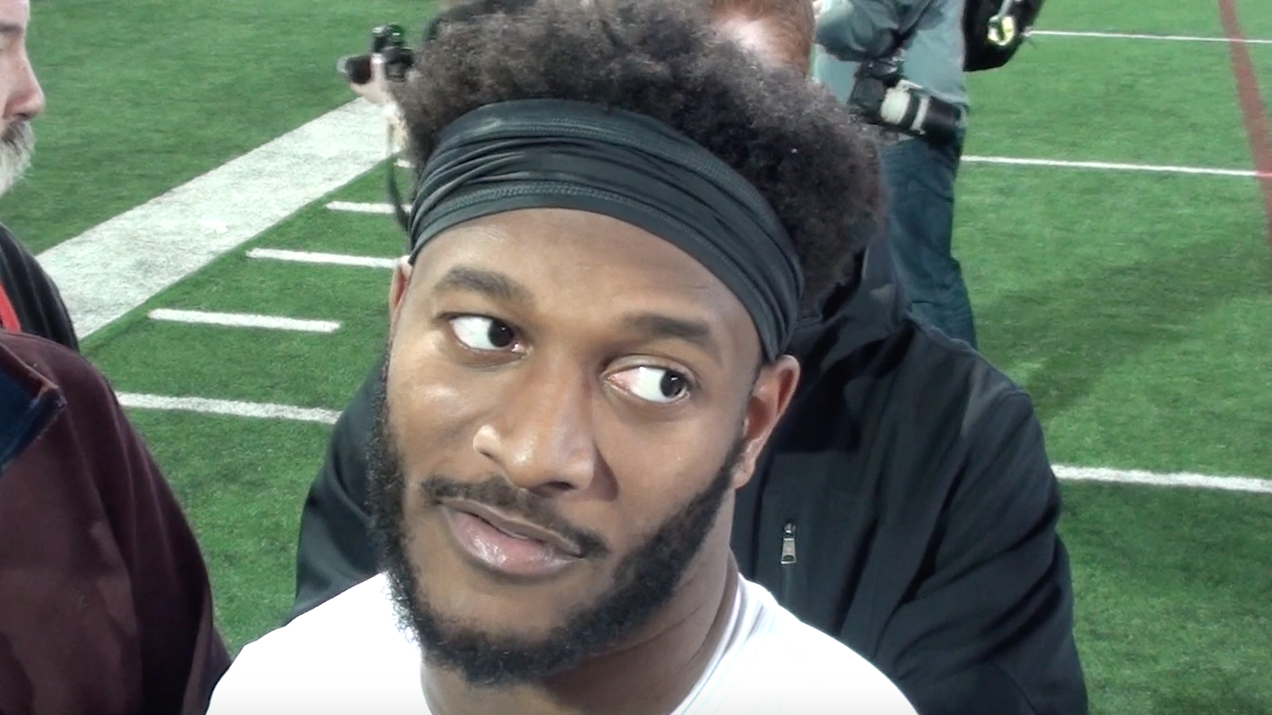 K.J. Hill could have rode off into the sunset with Urban Meyer following Ohio State’s Rose Bowl victory against Washington, but he had unfinished business in Columbus.

The H-back from Little Rock, Ark., led the Scarlet and Gray in catches as a sophomore with 54 and finished second as a junior with 70. Hill proved himself as a reliable option for his quarterback, Heisman Trophy finalist Dwayne Haskins, gaining 885 yards and scoring six touchdowns.

After an extremely productive season, Hill strongly considered forgoing his senior season and entering the NFL Draft. He would have most likely been picked, with many experts projecting him as a middle-round selection.

“I thought I was out the door,” Hill, who consulted Ohio State great Cris Carter about his options. “Then again, I had to think about what I had to do. I rethought, and made a decision. I feel like I’d have more opportunities being an upperclassman, with the Senior Bowl and other opportunities.”

Hill’s former teammates and Ohio State captains, Parris Campbell, Terry McLaurin and Johnnie Dixon, who were fellow Zone-6 members, exhausted their eligibility this past season. As the receiver trio moves onto the NFL, more offensive opportunities will open up for Hill and his teammates.

Campbell, McLaurin and Dixon combined for remarkable totals of 167 catches, 2,433 yards and 31 touchdowns during the 2018 season. With the Buckeyes losing that type of production at the wide receiver position, Hill knows he will have to step up.

“It’s just big shoes to fill, and I’m willing to do that,” Hill said. “I feel like me going out there, I have to work harder for me individually to show everybody how we keep the standard, even go higher than the standard we had last year. Me, Coach Hartline, Austin (Mack), Ben (Victor) — we’ve been talking about that.”

“We got to keep that standard, but it starts with us first. So I feel like we got to get ourselves right and work hard, and that will veer off into the younger guys.”

Hill (6-0, 195) plays the H-back position, which was the same position as Campbell. Campbell led the Buckeyes with 90 catches, 1,063 yards and 12 touchdowns at the position a year ago, while partially splitting time with Hill (some formations included both receivers).

Campbell will likely be an early-round selection after his performance at the NFL Scouting Combine, and his vacancy on Ohio State’s roster might suggest Hill will take on all of his targets. However, Hill understands the importance of having depth in Ryan Day’s up-tempo offense.

A reporter asked Hill if he told the other H-back that he’s not coming off the field now that Campbell is gone.

“No, I got to come off the field,” Hill said, “it’s too much running. We got CJ Saunders and Jaelen Gill — I feel like we all can rotate, especially how fast we’re playing — we need fresh legs on the field at all times.”

Prior to the Rose Bowl, Hill discussed his thought process when weighing his options. The high school All-American from North Little Rock (Ark.) High School said if he departed for the NFL, then he would be leaving on a high note, but if he stayed, then there would be more opportunities within the offense and the possibility of being a captain.

“It was kind of building up,” Hill said. “Because you know, right when the game ended it was like, ‘All right, are you going to start real life now or do you want to stay in school?’

“So I kind of battled back and forth with it. You know, one day I’m leaving, then, the next day I was staying. So it was a good decision to have, but it was stressful — very stressful.”

With his decision behind him and opportunities ahead, Hill will be a go-to target for his new quarterback, first-year starter and Georgia transfer Justin Fields. Hill could also have the opportunity to keep a captain in the receiver room, with one final offseason to grow as a leader.