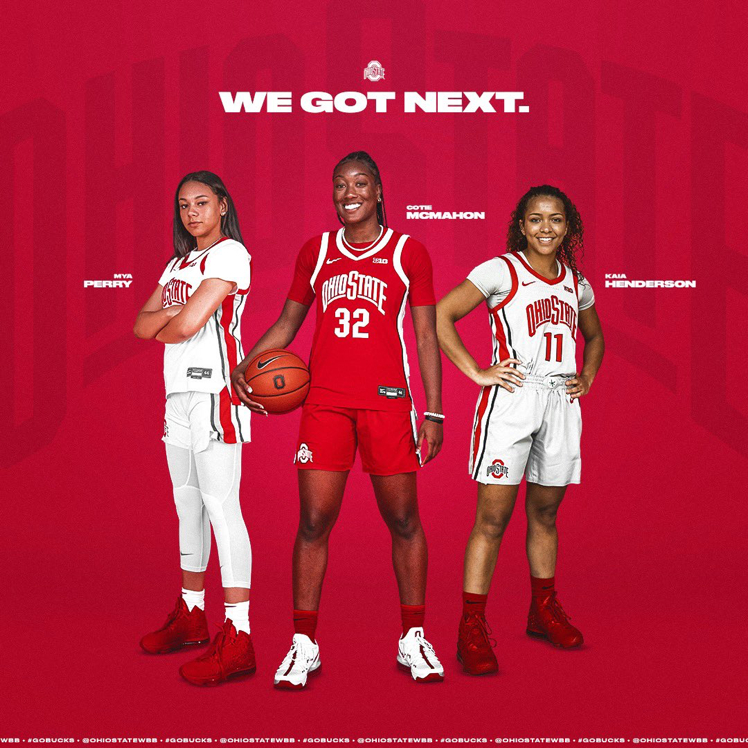 Three Ohio State women’s basketball commits signed their letters of intent on Signing Day, solidifying the potential backcourt of the future as guards Kaia Henderson and Mya Perry, as well as forward Cotie McMahon, will all be eligible for the 2022-23 season. Henderson and McMahon will be on campus sooner rather than later, electing to enroll early for the upcoming spring semester.

McMahon (6-0) is a four-star prospect and is No. 23 in ESPN’s 2022 recruiting rankings, ranked as the fourth-best at her position. She received an offer from the Buckeyes in June 2018 and was the first Ohio State commit in the 2022 class.

She joins the Buckeyes from Centerville, Ohio, where she plays for her local high school. She has increased her production in each season, averaging 15.8 mpg as a freshman, 18.9 ppg as a sophomore and 20.2 ppg as a junior. Last season, she reached double figures in all 20 games and scored a season-high 30 points against Tecumseh. She has 1,319 career points.

Perry (5-11) was Ohio State’s second commitment in the class, and comes from across town in Reynoldsburg, where she plays for the local high school. She earned All-Ohio special mention honors following her junior season in 2020-21 as she averaged 15.0 ppg. Perry averaged 14.0 ppg during her sophomore season and was named All-League First Team and All-District Honorable Mention for her play.

Henderson (5-6), Ohio State’s final commit in 2022, is from Utica, New York, where she plays for New Hartford High School. She is the school’s all-time leading scorer with 2,092 career points going into her senior season. As a junior, she averaged 33 ppg through the team’s first six games, eclipsing 30 points five times, including a season-high 38-point performance. During the 2019-20 season, she totaled 494 points through 20 games, averaging nearly 25 points per game.