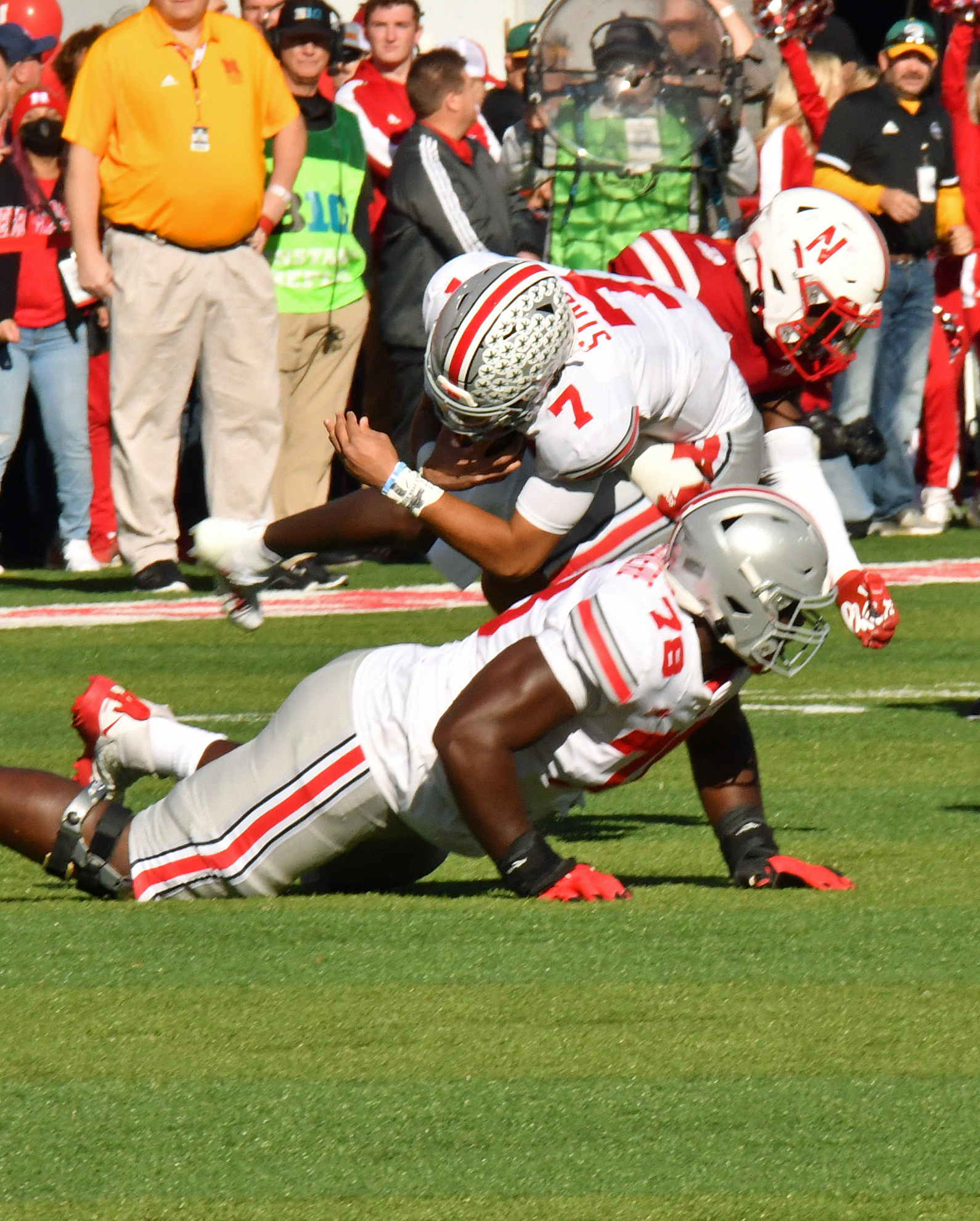 When Purdue plays a top-five team, they find a way to win the game. After beating No. 3 Michigan State last weekend, they claimed their 17th victory over an Associated Press Top 25 opponent as an unranked team — no other program has won more than 11.

With the win, the Boilermakers are still outside the AP Top 25. sitting atop the “others receiving votes” category. However, the College Football Playoff committee ranks them as the 19th-best team. Bottom line — Purdue is a good football team with good players. David Bell and George Karlaftis will play on Sunday, while Austin O’Conner looks like the second-best quarterback in the Big Ten behind C.J. Stroud.

Bell will have a great game against the Buckeyes. He is the best wide receiver in the conference, along with Penn State’s Jahan Dotson, who caught 11 passes for 127 yards in Columbus on Oct. 30. The Ohio State secondary will struggle to contain him as Purdue moves him around the field, mixing up looks out wide and in the slot.

Ohio State head coach Ryan Day admitted on The Ryan Day Radio Show that they won’t be able to fully stop Bell from making an impact, but the defense will do its best to contain him. In other words, Day knows that the Purdue wide receiver is dangerous. Expect him to be a game-changer on Saturday evening.

Still, the Buckeyes are better than their opponent in this game, and I think Ohio State wins by a couple of scores. Day and company won’t cover the 20-point spread but they get the job done.

It’s going to be another tight one for the Buckeyes – who are becoming more familiar with close games than they’ve been accustomed to in recent seasons under Ryan Day – but as they did in the last two, they hold on late here to improve to 9-1 heading into the toughest stretch of the season, hosting Michigan State and visiting Michigan.

Also like those last two, this game is marred by solid but not incredible defense from the Buckeyes, who are able to hold just about everything but David Bell under wraps. Bell, however, is excellent as always and keeps Purdue in the game for all 60 minutes.

On the other side of the ball, C.J. Stroud continues to press without much of a rushing attack, and a trio of Noah Ruggles field goals in the second half make the difference for an offense that otherwise can’t get a whole lot going for it. The Buckeyes survive and advance, again, but their playoff pitch loses a little more steam for the third straight week.

It’s hard to classify this as a trap game given the degree to which Purdue’s conquests over top five teams is documented, but it’s still something to consider as Ohio State invites in the Boilermakers for the first time since their 49-20 win over the Buckeyes in West Lafayette in 2018.

Despite a questionable loss to Minnesota, Purdue is a legitimately good team this year, knocking off Michigan State and Iowa in a dominating fashion. While there is potential for Purdue’s third top-five upset of the season, the talent gap appears too large to give way to Spoilermaker antics this week.

Quarterback Aidan O’Connell and receiver David Bell should make things difficult for Ohio State’s secondary which hasn’t been significantly tested this season, but the rushing attack ranks among the worst in the country, just ahead of Nevada and Mississippi State at 78 yards per game. Purdue’s one-dimensional offense will have trouble finding points against an Ohio State defense that is slowly finding its way.

Also, if there’s a week for Ohio State’s rushing attack to get moving again, it’s this week. Purdue is the best secondary Ohio State has faced this season, giving up just 185 passing yards to opponents, so a healthy dose of TreVeyon Henderson could be just what the doctor ordered to get the Buckeyes’ offense back in sync as matchups with Michigan State and Michigan loom large. Whether or not the offensive line steps up to the plate remains to be seen.

Ohio State should end up with a comfortable win on the back of its defense, but the offense has not shown enough yet to start picking complete blowouts for the Buckeyes.

I’ve picked blowouts the last two weeks and have gotten instead a couple of nine-point victories against decent opponents. Penn State and Nebraska had excellent defensive game plans which confused Ohio State just enough to keep the score manageable.

Purdue gets a lot of ink because of its offense, but the truth is that the Boilermakers are only ninth in the Big Ten in scoring at 24.8 points per game. That’s about three touchdowns south of what the Buckeyes average (44.9). So, those of you thinking QB Aidan O’Connell might throw for 500 yards against Ohio State, yeah, he might do that. He might also throw for five interceptions.

I just have this strange feeling that the Purdue defense will do what Penn State and Nebraska did before it, and that’s what gives me pause. I don’t care that the Boilermakers have made a living lately on slaying top-five teams. Their wins against Iowa and Michigan State have no bearing whatsoever on what might happen against the Buckeyes.

What will have a bearing is the fact that Purdue ranks No. 16 nationally in scoring defense and No. 15 against the pass. C.J. Stroud needs to make better decisions than he made against Nebraska, and one of those decisions might involve running the ball a bit more. Defenses are a lot less likely to respect your play fakes if you never choose the “R” out of an RPO.

I really came close to calling the upset, but I couldn’t pull the trigger for a trio of reasons. First, Purdue is winless in its last nine trips to Columbus. Secondly, I think Ohio State can run the ball effectively against Purdue. And third, Vegas believes the Buckeyes are three touchdowns better than the Boilermakers.

I don’t agree with the spread, but …