Who Are The 26 Buckeyes Who Qualified For The Olympics? Part One 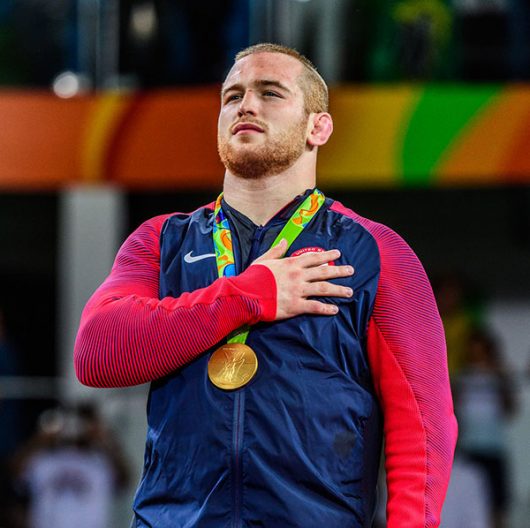 A record total of 26 current, future, or former Ohio State athletes will compete in the 2021 Tokyo Olympics set to begin in July.

The Ohio State athletes will represent 12 different countries in the international games. Nine of the 26 will compete for the United States.

Here are the names and accolades of the first 13 athletes competing for their countries in the international games:

Aquilla finished third in the shot put at the U.S. Olympic Trials to earn a spot on the team.

The Ohio State junior qualified for the finals in the shot put by finishing fifth in the first round. In the last event, Aquila’s first toss carried 18.95m / 62-2 ¼, which landed her in second. Raven Saunders’ 19.96m / 65-6 throw dropped Aquilla to third, a position she held for the remainder of the finals.

Aquila’s Olympic qualification is the latest addition to her decorated 2021 resumé. She won national titles in both the NCAA indoor and outdoor seasons while setting school and Big Ten records. In addition, Aquila was the first Buckeye to win an individual track and field championship since 2012. For her efforts, Ohio State named Aquila the Female Athlete of the Year.

Armstrong qualified in the 100 backstrokes with a personal-best swim of 52.48 seconds in the finals, trailing only gold medalist and world-record holder Ryan Murphy, who won the event in 52.33 seconds.

The Dover, Ohio, native advanced to the finals with a then-personal best of 52.67 seconds in the backstroke.

“We’re so incredibly thrilled for Hunter and the opportunity he now has to represent the United States at the 2020 Tokyo Olympics,” Ohio State director of swimming and diving Bill Dorenkott said. “He is swimming extremely well and is within striking distance of the world record (51.97 seconds, set by Murphy in 2016). I think he will have some terrific Olympic swims.”

Battle finished third in the 200-meter finals at the Olympic Trials in Eugene, Oregon. She ran a personal best of 21.95 seconds, behind Gabby Thomas (21.61 seconds) and Jenna Prandini (21.89 seconds), who finished first and second.

The Ohio State senior continue to improve her times with each event in the trials. In the first round, Battle sprinted the 200-meter event in 22.37 seconds. Then in the semifinals, she ran a 22.32 seconds to earn fifth-place overall. In the finals, she narrowly broke 22.00 seconds.

As a Buckeye, Battle has won five Big Ten Conference titles and is inching closer to former Ohio State track stars Donica Merriman (nine Big Ten titles) and Christina Manning (eight Big Ten titles). She earned a Big Ten Track Athlete of the Year award and All-American honors in 2020 before the season was canceled due to the pandemic.

As a Buckeye, Clemons was an 11-time All-American, 10-time Big Ten Champion and two-time National Champion for Ohio State. The Waldorf, Maryland native holds numerous school records in track and field, including the 60-meter dash, 60-meter hurdles, 100-meter hurdles and the 4×100-meter relay.

Ohio State rising sophomores Henry and Jackson Leverett are brothers from Bainbridge, Georgia. Both will compete for the United States in Tokyo after qualifying for the 25-meter rapid fire pistol event.

The Olympics limited the number of shooters the American national team could bring to the summer games. Still, the United States secured another spot from the International Shooting Sport Federation. Team USA chose Henry to fill the place.

Remati will represent the United States synchronized swimming team for the fifth time this summer. She will be a freshman at Ohio State this fall after graduating from Laurel Springs School in Andover, Massachusetts.

The soon-to-be Buckeye had competed for the United States since 2016 when she finished first in the solo and figures competitions. She defended both titles the following year, in 2017.

Remati’s latest career highlights are a third-place finish in duet tech and duet free at the 2018 China Open and a 10th and 11th place finishes in the same events at the 2018 Japan Open.

Snyder’s Olympic resumé is overflowing with accolades. He became the youngest Olympic and world champion when he won the gold medal (97kg / 213 pounds) at the 2016 Rio Summer Games.

Snyder, the world’s top 97kg / 213-pound wrestler, has competed in 40 international matches in the last two years and holds a 38-2 record. He is a favorite to defend his gold medal at the 2021 Tokyo Games.

Yoder secured his spot on the U.S. men’s gymnastics Olympic team after finishing the pommel horse with scores of 14.55 and 15.05. He will represent Team USA as an individual specialist.

The Indianapolis native is an all-time Ohio State gymnast. In addition, he was an eight-time All-American, a three-time First Team All-Big Ten winner and a two-time Big Ten champion in the pommel horse.

Yoder is the first male Olympic gymnast out of Indiana since 1904, according to Olympics historian Bill Mallon.

Blais Belanger made his world championship debut for Canada in 2013. Eight years later, he will represent his country in the Olympics after a winning performance at the Pan American qualifier in San José, Costa Rica.

At Ohio State, Blais Belanger won gold in the men’s épée event at the 2018 NCAA Fencing Championships at Penn State. In addition, he finished in second place at the 2016 NCAA Championships.

Armstrong’s first international competition was Team Ontario at the U12 Pan American Championships in 2011. A decade later, Armstrong will compete in her first Olympic games.

Born in Toronto, Ontario, Armstrong started synchronized swimming at 4 years old because her sister Amy, also on the national team, was in the sport. She credits her sister for teaching her determination.

Armstrong will join Ohio State’s synchronized swimming team in the fall. She will look to help the Buckeyes claim their 33rd national championship in 2022.

Gaziev will represent his country in the Olympics for the first time this summer. He is regarded as one of Canada’s top sprinters.

The rising junior received an invitation to join Team Canada after finishing second in the men’s 100 freestyle. He also qualified to swim in the 400 free relay.

Goldie made history at the 2010 Canadian Championships when she became the first woman to win national titles in the Cadet, Junior and Senior divisions in the same year. For the next ten years, she would continue to impress as a member of Team Canada.

The Calgary, Alberta, native started fencing when she was 8 years old because her whole family was involved with the sport. Her older brother, Eric, and older sister, Brita, both competed internationally in fencing.

As a Buckeye, Goldie made two runs for NCAA Fencing Championships titles, finishing with medals in both events.