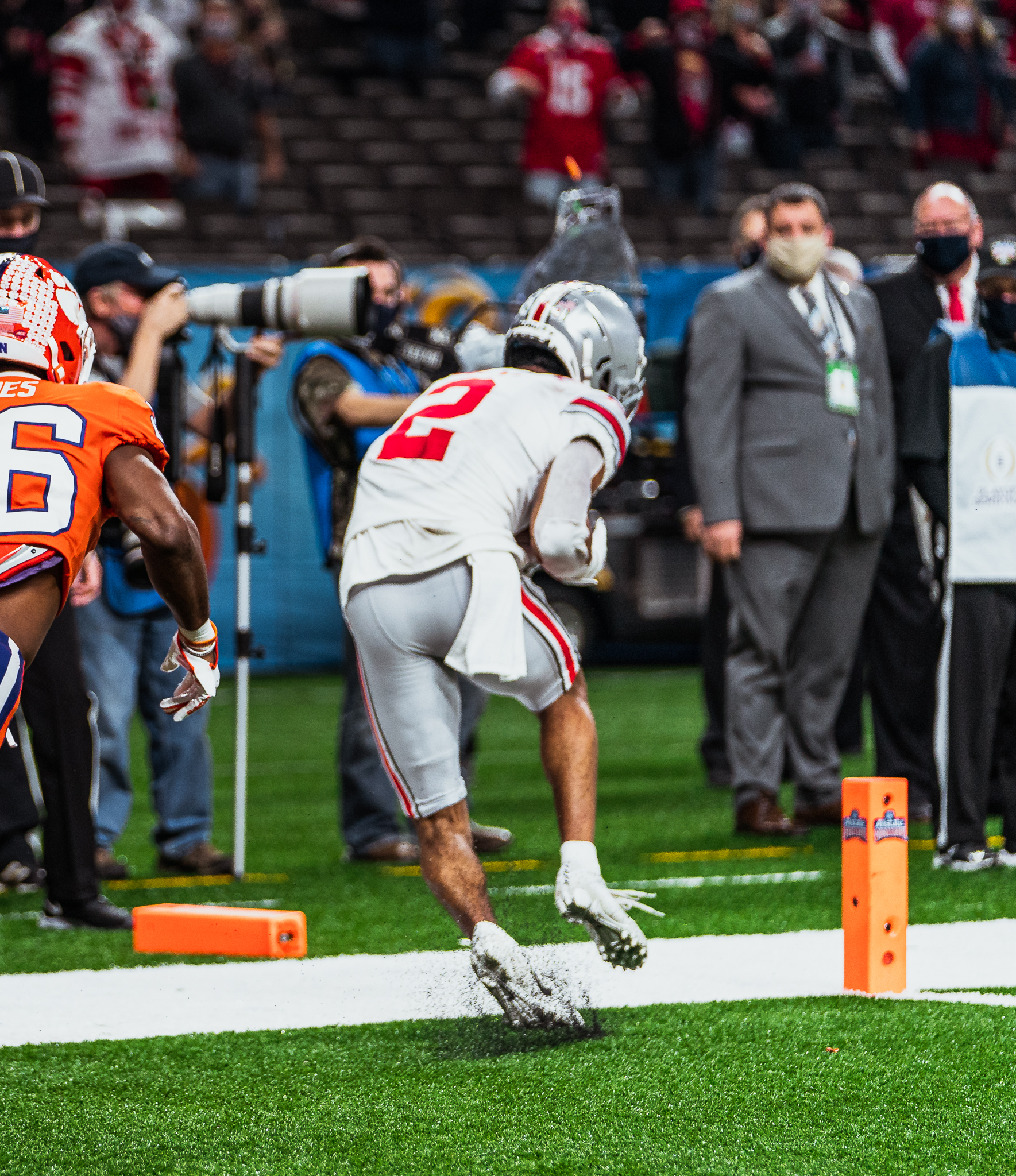 Ohio State was well-represented on the Pro Football Focus preseason All-American teams for the upcoming college football season, released on June 28. Four Buckeyes landed on the first-team, with a fifth included as an honorable mention. Here’s where the Buckeyes checked in, and what PFF had to say about them.

“Olave was projected to be a first-round selection in the 2021 NFL Draft but made the surprising decision to return to school and boost his stock even higher,” PFF writer Anthony Treash wrote. “For the Buckeyes, this is fantastic news. They are returning perhaps the most refined route-runner in college football.

“Olave has generated a step or more of separation on over 87% of his targets since 2019, the highest rate in the country. Against single coverage over the past two seasons, he has racked up 15 receptions of 15-plus yards in which he had more than a couple of steps of separation, trailing only Alabama’s DeVonta Smith for the most in the FBS (19) and was five more than the next-best Power Five receiver.”

“Like his teammate Olave, Wilson is one of the best route-runners in the game. He impressed against single coverage (sixth in PFF grade on such plays) and frequently found soft spots against zone while working from the slot, leading to a separation rate that ranked eighth-best in college football this past season. The 2019 five-star recruit is bound to put up numbers in this offense once again in 2021.”

Wilson beat out Treylon Burks from Arkansas, Khalil Shakur from Boise State and John Metchie III for this spot. Justyn Ross of Clemson is the third and final first-team wide receiver.

“Munford is taking advantage of his “super senior” year and returning to school for the 2021 season, which is a big positive for the Buckeyes. He was a decent starter at left tackle for Ohio State in 2018 and 2019, but he improved his play even further in 2020. Munford posted a 91.8 PFF grade this past season, the fourth-best mark in the FBS and the highest mark among returning tackles. His pass protection was nearly flawless in 2020.

“Munford stood strong against quality pass-rush units, such as Michigan, Clemson and Alabama, and displayed tremendous processing speed against stunts and blitzes all year long. Over 264 pass-blocking snaps, he allowed just three pressures, none of which were sacks or hits on quarterback Justin Fields. In turn, his pressure rate allowed was half a percentage point lower than any other Power Five left tackle.”

“Garrett was a four-star prospect and a top-100 recruit in the 2017 class, but he didn’t consistently see the field until the 2020 season after just over 400 snaps over his first three college campaigns. Yet, Garrett broke out in a big way in 2020, earning an astounding 88.9 pass-rush grade that trailed only Alabama’s Christian Barmore — a first-round pick in the 2021 NFL Draft — for the best in the Power Five. Garrett may have generated only 18 pressures in eight games, but he won consistently. In fact, his 17.9% win rate also trailed only Barmore for the best mark in the Power Five. He is a force of nature with heavy hands, bound to wreak havoc again in 2021.”

Garrett earned the top spot at DT followed by West Virginia’s Dante Stills, Bryan Bresee from Clemson and Calijah Kancey of Pitt. The other first-team DT spot went to Jermayne Lole of Arizona State, while Oklahoma’s Nik Bonitto and Oregon’s Kayvon Thibodeaux fill out the line. Tyreke Smith was the last of the Buckeyes included, picked as an honorable mention at end behind Thibodeaux, Michigan’s Aidan Hutchinson and Will Anderson Jr. of Alabama.