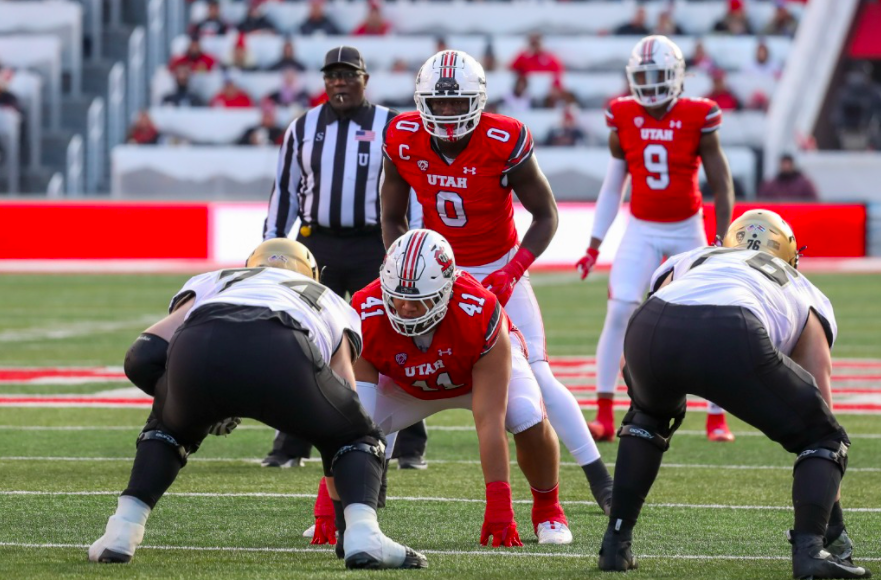 Devin Lloyd, Utah’s star junior linebacker who turned down a potential day one draft spot a season ago, is the unquestioned leader of both the defense and the team at large for the Utes. In fact, Kyle Whittingham – who has seen quite a few strong defenders in his day – doesn’t think he’s seen anyone better at Utah than the Chula Vista, Calif., native.

“Devin (Lloyd) is a special football player,” Whittingham said. “I’m going to tell you the best defender that’s ever come through the University of Utah, at least in the modern era. There may be someone in the ’30s or ’40s or whatever that I don’t know about. But in the modern era, he is going to be, without a doubt, the highest-drafted defensive player that we’ve had. He is a guy that is self-made. He came to us as a safety and a wide receiver out of high school, and we projected him a linebacker. And now he’s one of the top linebackers in the country.

“His versatility allows us to use him in an inside backer spot, which is where he is most comfortable. We can also bring him off the edge. He’s done a lot of pass rush for us in the sub-packages. He’s got the size, the strength, the speed, the agility that all the big-time players have.”

Wherever he lines up, Lloyd functions as the center of Utah’s defense from which everything else originates. He’s Whittingham’s extension on the field, calling out plays and adjustments and setting alignments for his teammates around what he sees from the offense. His 106 tackles and 22 TFL easily lead the team, and his eight sacks from that linebacker spot is among the best of any true linebacker in college football. He’s an almost surefire All-American and is projected largely as a first-round selection in the upcoming NFL Draft if he decides that this Rose Bowl will be his final game as a Ute.

“His impact and value cannot be overstated. I mean, he is such a leader, such a pure talent,” Whittingham said of Lloyd. “He could have come out last year and been a first- or second-round draft choice. I think he’s probably played his way into the top 10 or 12 in the first round now, that’s what I’m hearing.

“But he came back, and he was a man on a mission, he wanted to win the championship. He wanted to be an All-American. He had these goals. We sat down and he told me all of his goals when we had the meeting just a little over a year ago when he was making that decision. He says, ‘I’m coming back and here’s why. Here’s what I want to accomplish.’ And he’s checked every box so far.”

Next to him at linebacker, rover Nephi Sewell (the brother of Oregon linebacker Noah, former Oregon offensive tackle Penei and former Nevada linebacker Gabriel) has managed to fly under the radar because of his proximity to Lloyd, but he too has been excellent. He works largely as Utah’s answer to short passing attacks and tight end threats but still has 81 tackles and 6½ TFL to his name for the year. Against run-heavy looks, Oregon flexes a third linebacker onto the field, but against the Buckeyes, it will likely stick closely to a 4-2-5 base to answer the Jaxon Smith-Njigba problem in the slot.

That could mean that Ohio State needs to lean more on a struggling rushing attack to generate yards, at least if it wants to take advantage of what the Utes are showing it defensively.