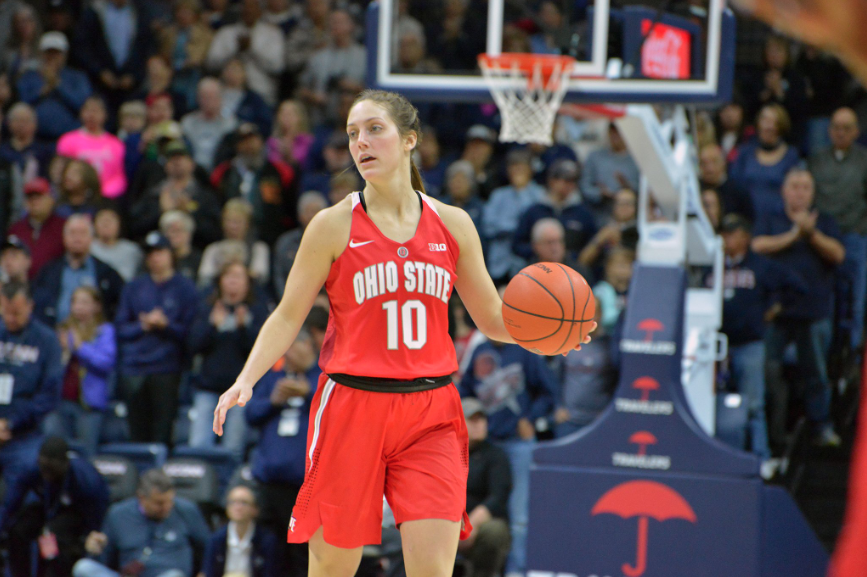 On the road for the first time by way of what projects to be its toughest opponent of the season, the Ohio State women’s basketball team was overmatched Sunday at Connecticut as the No. 2 Huskies handed the Buckeyes an 85-53 romp before 8,828 at Gampel Pavilion in Storrs, Conn.

In the loss for the Buckeyes (1-2), who played their second top-25 opponent of the campaign after they got routed in Nov. 6’s 71-47 final against No. 22 South Florida, graduate guard Carly Santoro and fifth-year senior forward Makayla Waterman provided the bright spots as the duo combined for 31 points and 20 rebounds.

Santoro scored a game-high 20 points on 6-of-9 shooting (3 for 5 on three-pointers) — a new season-high mark in her first three games with the Scarlet and Gray — while Waterman added her first career double-double on 11 points and a game-high 12 rebounds, which doubled as a career-high total.

OSU fell behind quickly against UConn, which took early command of the contest with a 30-12 lead at the end of the first quarter. The Huskies had four scorers notch double digits between the 69-point quartet of Katie Lou Samuelson (19), Crystal Dangerfield (18), Napheesa Collier (17) and Megan Walker (15).

Ohio State, for the most part, kept Connecticut in check for the first half of the opening period. But after Santoro knocked down her first triple of the game to make it 18-10 at the 4:34 mark, the Huskies ended the final 4:05 on a 12-2 run starting with Samuelson’s pair of free throws and ending on Walker’s layup with 20 seconds left.

Out of the break, the Buckeyes showed some signs of life as Santoro scored eight points in the frame, which OSU outscored the Huskies by a 22-19 edge. The surged started with OSU scoring 10 of the period’s first 13 points, highlighted by threes from Waterman at the 7:39 mark and Santoro at the 7:06 mark to make it 52-29.

Graduate guard Adreana Miller rounded out Ohio State’s double-digit scorers with 10 points, finishing with 3-of-10 shooting but 2 for 5 from long range and sinking a pair of free throws, also pulling down five boards. She got involved in the third-quarter spree, knocking down seven points on a pair of free throws at the 4:26 mark and a triple with 39 seconds left.

But with a 68-41 deficit by the end of the quarter, the hole was too deep for the Buckeyes to climb out of. Connecticut maintained control of the game in the fourth quarter, holding a 17-12 edge against OSU on the way to the 85-53 final.

Second to Waterman’s career- and game-high 37 minutes, graduate guard Carmen Grande logged 36 minutes but struggled mightily with a 1-of-12 mark from the field and blanking as an 0-for-3 shooter on triples while dishing two assists and collecting three rebounds.

Ohio State, which got in the win column Nov. 9 with a 55-41 victory against Detroit Mercy, returns to action on the road Friday against Sacramento State at 11:30 p.m. ET. The nonconference matchup with the Hornets starts a weekend swing on the West Coast for the Buckeyes, who travel to Stanford two days later Nov. 18 for a 4 p.m. ET tipoff against the Cardinal.