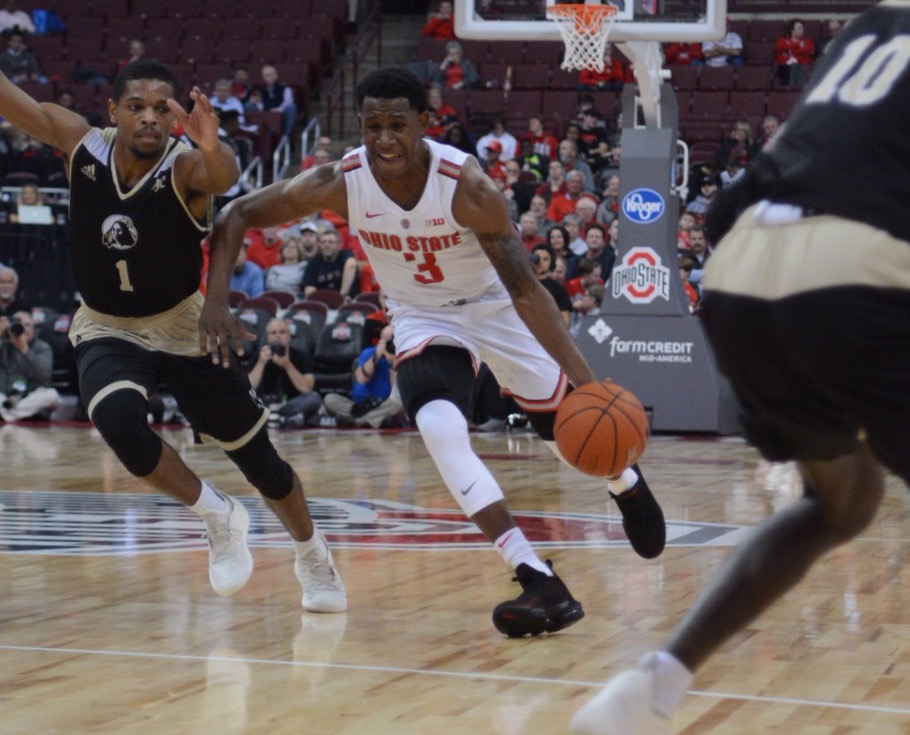 For the second straight game, Ohio State didn’t get off to the start it wanted. However unlike the season opener against Cincinnati, the Buckeyes were able to pull away in the second half of their home opener.

The Buckeyes, led by a strong performance from senior guard C.J. Jackson, defeated Purdue Fort Wayne on Sunday, 107-61, to move to 2-0 on the season. Jackson poured in 12 points in the first half and finished with a career-high 25 to lead all scorers. His previous career-high was 23 in a win over Stanford a year ago. Jackson also added six rebounds and five assists in the victory.

Unlike Ohio State’s season opening win against Cincinnati, the second game of the season featured plenty of offense. The Buckeyes and Mastadons were tied at 10 at the first media timeout after Jackson drove to the lane, completing a layup while also drawing a foul. The high-scoring affair continued throughout the first half as PFW converted on four of its first five three-point attempts.

The Buckeyes extended their lead to as many as nine late in the first after freshman guard Duane Washington Jr. buried back-to-back three-point shots to give Ohio State a 41-32 lead. He dropped in six of his nine three-point attempts and finished with 20 points in the win.

On the ensuing offensive possession, junior forward Andre Wesson missed a dunk attempt and fell to the ground hard. He gingerly walked off the court under his own power, holding his lower back. He was taken to the locker room by Ohio State trainers and eventually returned to the game with 15:21 to play in the second half.

PFW ended the first half with a breakaway layup at the buzzer, sending the two teams into the locker room with Ohio State holding a 41-34 lead.

The second half saw another offensive explosion from Jackson, who at one point converted three straight three-pointers on back-to-back-to-back possessions for Ohio State, giving the Buckeyes a 52-38 lead with 16:40 to play in the game.

Ohio State’s lead ballooned to as many as 48 in the second half as the Mastodons managed just 27 points to Ohio State’s 66 in the final 20 minutes. Freshman Luther Muhammad, making his first home start, finished with 12 points on 4-of-8 shooting while Jaedon LeDee made his first appearance as a Buckeye and repeatedly got to the free throw line, converting on 12-of-14 attempts, finishing with 16 points. As a team, Ohio State shot 24-of-28 from charity stripe and 15-of-28 from the three-point line.

Chris Holtmann emptied his bench late in the second half as Justin Ahrens made his first appearance as a Buckeye, and was joined by Joey Lane and Danny Hummer.

Ohio State is set to return to action Nov. 15 to take on Creighton in Omaha, Neb. as part of the Gavitt Games, an annual series that pits Big Ten teams against teams from the Big East conference. Tip is set for 7 p.m. on Fox Sports 1.