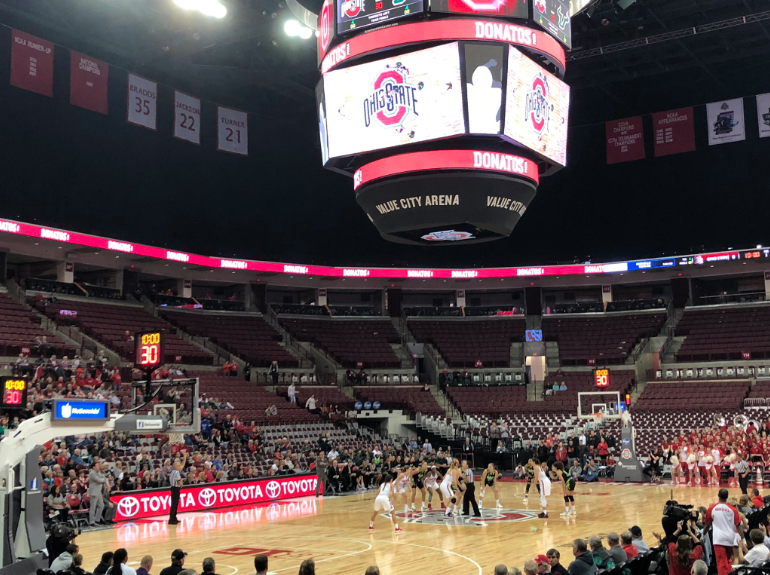 The Ohio State women’s basketball team fell behind early and failed to climb back into its season opener against No. 22 South Florida as the Bulls blew the Buckeyes out 71-47 on Tuesday at Value City Arena in Columbus.

OSU (0-1) registered its lowest output since Nov. 30, 2017, when head coach Kevin McGuff’s squad dropped a 69-60 result at Duke. Santoro and freshman forward Dorka Juhasz, who pitched in a double-double performance with 10 points and 10 rebounds, posted nearly half of the offense’s scoring.

“They exposed some things where I thought we would need to get better with, specifically our rebounding’s got to improve,” McGuff said of his team’s minus-16 margin (48-32). “We’ve got to be much more efficient at the free-throw line. And then offensively, when we got out of what we were trying to do, it usually resulted in a bad shot or a turnover. So our execution’s got to get better.”

Moments after Juhasz controlled the tip for Ohio State, she got the Buckeyes on the board from Grande’s left-handed feed to her on the low post for a 2-0 lead 26 seconds into the game. South Florida (1-0) answered on the other end with the next seven points behind Beatriz Jordao’s three-point play on the ensuing possession, followed by consecutive layups from Sydni Harvey and Jordao to flip a 7-2 advantage.

Santoro connected on a triple to cut the deficit to 7-5, but that was the closest OSU got the rest of the contest. After the two teams traded buckets, USF went on an 8-0 run and pushed its lead to 15-5. Juhasz ended the drought with a jumper, but Laksa responded from long range to push the lead back to double digits. Harvey (16 points), Jordao (17 points) and Laksa (17 points) went on to combine for 50 points.

Waterman went 1 for 2 at the free-throw line and it hurt Ohio State as South Florida knocked down another shot from deep by Elisa Pinzan to go up 21-8. Grande gave the Buckeyes a 10-point deficit into the break when she connected on her attempt with 43 seconds left in the opening period.

USF surged into the second quarter with a 7-0 run on Harvey’s layup, Laksa’s triple and Jordao’s jumper to widen the margin to 28-11 — its largest of the first half — at the 7:44 mark. OSU answered with the game’s next four points between Juhasz’s layup and graduate guard Najah Queenland’s jumper — her first career points as a Buckeye — at the 5:08 point to cut the deficit down to 13.

In the final five minutes, though, South Florida started to pull away. The Bulls closed out the last 4:13 of the first half on a 9-4 spurt, started by Syndi Harvey’s pair of free throws and capped by Tamara Henshaw’s layup with 47 seconds left in the second quarter. USF then scored the final five points of the period to put OSU in a 37-19 hole at halftime.

South Florida’s surge spilled into the second half. Ohio State scored 25 seconds into the third quarter on a free throw from Juhasz before the Bulls ripped off seven points — all from Harvey on two free throws, a three-pointer and a layup — as the margin widened to 44-20 with McGuff calling timeout at the 7:00 mark.

Out of the break, the Buckeyes showed some fight with five points from a Crooms layup and a Juhasz three-point play to cut it to 46-26 with 5:45 left in the period.

“I just think we were attacking more of the dribbling gaps and it just got us scoring more, especially me,” said Santoro, who dropped eight points in the third quarter. “I think we emphasized at halftime.”

Ohio State kept pace with South Florida in the fourth quarter, but not before the game was well out of reach. After Alyssa Rader’s layup made it 63-37 with 7:58 to go, the Buckeyes scored six straight points into the 5:08 mark but still trailed by 20 at 63-43.

Ohio State returns to Value City Arena on Friday at 7 p.m. against Detroit Mercy. The Buckeyes then hit the road over the weekend for another top-25 matchup against No. 2 Connecticut on Sunday at noon.

“Sometimes we have to get these first punches in the face,” Juhasz said. “We’ll be really different on Friday.”